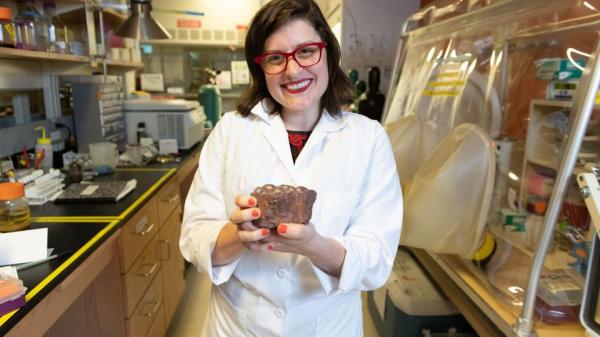 Jennifer Glass earned her Ph.D. at ASU’s School of Earth and Space Exploration in geological sciences in 2011. She is currently an associate professor of biogeochemistry at Georgia Institute of Technology. We recently caught up with this alum to learn about how her childhood in the outdoors sparked her early passion for protecting the environment, along with how the dual disciplines of geology and biology are leading the search for life on other worlds.

A: I'm from the Pacific Northwest and I grew up primarily in Olympia, WA, which I think is why I became interested in science: The natural beauty of the Pacific Northwest. My family took advantage of that, doing a lot of outdoor activities, hiking around the Puget Sound, exploring volcanoes. There is so much geologic activity up there to be inspired by.

In middle school I got interested in environmental science, because I had a really good teacher, Carol Serdar, in 7th grade. This was the late 90’s. I don't know if the rest of the country was as environmentally conscious, but when I was 16, I was teaching climate change seminars.

Then, in college, I discovered ocean science because I spent my first year at UC Santa Cruz. I fell in love with Monterey Bay. But I missed Washington, so I came back and finished my undergrad at the University of Washington, in Seattle, where I was fortunate to do lots of undergrad research in multiple labs.

Q: What brought you to ASU’s School of Earth and Space Exploration?

A: The reason I came to ASU was because of professor Ariel Anbar. At the time, in 2003, he had just recently moved to ASU and had written a paper that was, and still is, one of the only works concerning how metal availability through time has influenced evolution.

This has become a theme of my research ever since. Why did life decide to use a certain nutrient the way it does? What is the evolutionary history of that? Everything in your body has a four-billion-year-old history. All of our metabolic pathways have imprints of other microbial processes. We have all these fossils, essentially, within our biomolecules.

Q: Can you talk more about your work at ASU and how it concerns the search for life on other planets?

A: One thing to emphasize is that ASU has a great relationship with NASA. And Ariel was at the heart of getting astrobiology on the map. Astrobiology is the search for life outside of Earth, which sounds crazy, but now life-detecting missions to the outer solar system are in the works within our lifetime. Ariel got his first big grant to do this research in 2008. The project was called “Follow the Elements.”

The work I did with Ariel concerning metals relates to astrobiology because it involves where to look for life and what elements are required. Then, delving deeper, do we look at the surface? Is it possible to have life come from the deep subsurface?

Q: How was your overall experience at ASU?

A: I thought it was a fantastic environment. ASU has done a great job of breaking down the walls of the traditional departments, combining them in creative ways and giving them cool, creative names.

I have a lot of admiration for Michael Crow, ASU’s president. I still remember something he said to us when I was a grad student, which was basically that if we could make it through earning a Ph.D., then that would be our ticket to doing the work we truly wanted to do.

Q: What has life been like post-ASU? Where are you now and what are you working on?

A: I did a postdoc with NASA at Caltech in Pasadena, then I became a professor at Georgia Tech in 2013. In my own lab, among many other things, I'm looking at whether the ancient ocean conditions could have affected the atmosphere through greenhouse gas emissions, like methane and nitrous oxide. Which we do by basically mimicking the ancient ocean in a bottle, something I started learning when I was at ASU.

Q: I noticed on your website, you have a section called “Inclusion.” Can you talk about that?

A: Sure. Moving to Atlanta changed me as a human. I grew up in a very white part of the country. So coming here really opened my eyes to concepts of privilege, as well LGBT issues, #metoo issues, and just in general ways to make science more diverse and expand the field beyond the white male dominated place it has always been.

Becoming a faculty member, you have a lot of power, even if (believe it or not) you don't feel like you do. What’s that saying? With great power comes great responsibility. In the area of education, we’re responsible for how we lead the world.

Photo: Jennifer Glass in her lab at Georgia Tech. She is holding a stromatolitic ironstone full of iron that rusted out of early oceans. An eon ago, oceans appear to have been full of ferrous iron, which would have facilitated production of N2O (laughing gas). Credit Georgia Tech/Allison Carter

Interview and editing by William Kennedy