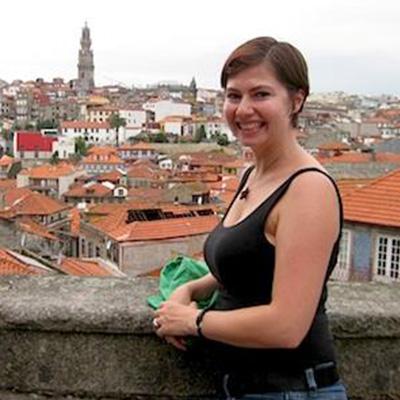 Many scientists can recall the moment that inspired their interest in science. For Natalie Hinkel, that moment occurred around the age of 13. She fondly recalls a visit to Miami and her uncle setting up a small 3-4” telescope in the street, and says she was drawn to astrophysics the first time that she saw Saturn through that telescope.

“My cousin thought that it looked like someone had put a sticker at the end of the telescope, because you could see Saturn and its rings so clearly. But I was just stunned that you could see so much detail in something that was so far away,” recalls Hinkel.

Gazing up at the sky – contemplating the immense and mysterious nature of the universe – ingrained in her an ardent curiosity for the unknown – a curiosity she brought with her to Arizona State University.

Hinkel graduated from ASU in 2012 with her doctorate in astrophysics and is now a postdoctoral fellow at San Francisco State University (SFSU). Her chosen field of study joined her childhood fascination with her aptitude for science and math.

“In high school, I was really geared towards math. However, when I first started college, I couldn’t help but take an astronomy course,” says Hinkel, who obtained her bachelors from Oberlin College in physics and math in 2005. ”I enjoyed the class a lot and continued to take more, which lead me to taking physics classes. I joined a research group my first year studying pulsars, which was both exciting – since those are super far away and kind of strange objects – as well as a bit tedious – I had to learn how to program, reduce data, etc.”

The daughter of professors, Hinkel is no stranger to academia and research. Both of her parents are professors in the geography department at the University of Cincinnati and were supportive of her decision to go into academia. Surprisingly, her parents were equally supportive of her choice to take a year off between undergraduate and graduate school to do absolutely nothing related to physics or math. After a few months of waitressing, bartending, and working as a receptionist at a day-spa, she realized that a more “regular” job was not really for her and that’s when she applied to graduate school.

“I consider taking that year off one of the better decisions I’ve made in my life,” says Hinkel.
“I was incredibly motivated when I came to ASU for grad school because I knew that this was really what I wanted to do.”

ASU excited Hinkel because of the astronomy research of the faculty and the inception of SESE.

“I met Paul Scowen at a AAS meeting and he gave me his card. I started emailing him questions about the university and the department, during which he told me about this new “school” that was being formed with astronomy and geology – later engineering. I was really intrigued about what this could offer, especially after researching the astronomy faculty,” says Hinkel, who attended ASU from 2006-20012. She was in the first incoming class, one of the two astronomy students out of the ~20 new graduate students.

Some of her best ASU memories include sitting in the big TA/student office in Physical Sciences F-wing working late at night with a bunch of other people on a problem set.

“After we had finished working out the “meat” of the problems, we put on the audio for Eddie Izzard’s “Dressed to Kill” while we finalized our answers. We were all very familiar with his standup routine and said everything along with him, in terrible English accents. It was hilarious,” she recalls.

But more importantly, her best memories surround the group of friends that she met during her fourth year, “because they are the people that really made Phoenix and ASU feel like a home.” Her close knit group of friends did much together: brunches, hikes, camping, rocking climbing at the nearby gym, parties, Vegas road trip, and watching movies.

“When thinking about how ASU helped me succeed, I first think about my friends. I’ve made a lot of really good friends within SESE, including my husband, Caleb, and they have given me a really strong foundation on which to grow, both while I was a graduate student and now as a postdoc,” says Hinkel. “My memories of ASU are tied up with my friends who made my life there so much better. I will always love them for that.”

After earning her doctorate, Hinkel postdoc’ed at Caltech for a year and then went with her boss to SFSU.

Hinkel recently published the largest catalog ever compiled for stellar compositions, called the Hypatia Catalog. The work is critical to understanding the properties of stars, how they form, and possible connections with the formation and habitability of orbiting planets. She will be returning to ASU in March as a postdoc to continue this work as part of a new project led by Professor Steve Desch.

“Hard work – really hard work – helped me reach my goals, but there were also those few faculty members that truly supported me when I needed it, even after I graduated from ASU. I respect not only their work but also them as people, which meant that their encouragement really made a difference,” says Hinkel.

Hinkel advises those following a path similar to hers to be persistent: “If your classes are hard, put in the time and really try to understand the material. If your research is confusing, keep trying different methods and techniques – ask other people outside of the department if you have to. If you believe in your work, with no reservations, then ignore the critics because there will be critics.”