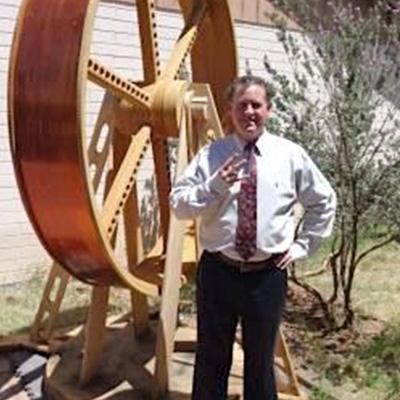 Like many of our alumni, Kenneth’s interest in science began early on in elementary school. He grew up with parents that were supportive and tolerant of a young boy’s experiments and scientific escapades. Constructing plastic, scale models was something that really spoke to him.

“My best memory was constructing a large-scale dirigible made of various materials in the back storeroom of my parents’ printing business. The scale was blowing my parents away and I hadn’t reached the phase of motorizing it yet,” he said. What his parents didn’t know was an antenna in 2013 would be constructed in the identical same spot from data acquired from his Timpson, TX, earthquake forecasting results.

But before he got to the point where he was able to assist with earthquake forecasting results, there was that matter of schooling.

Kenneth decided to attend ASU almost entirely from multiple stories he heard from an ASU alumni/friend. His friend was a College of Business Graduate and Kenneth had similar ideas regarding a business background; however, on April 21, 2003 he came to his senses and changed his major to geological sciences.

“Once I became a geology undergraduate, everything changed in a positive manner – professional comradery, academics, logic-based understanding, etc. Once I attained superior grades, grants and scholarships followed,” he recalls.

Professor Stanley Williams (volcanology) and Professor Matthew Fouch (geophysics) were his advisors. Williams’ was particularly instrumental in introducing Kenneth to interesting systems for gauging change, while Fouch introduced ideas regarding deep Earth discoveries not well understood and how not to give away experimental data to unknown parties. Others that made an impact were professors Ramon Arrowsmith (Active Tectonics), Steve Reynolds (Structure), Paul Knauth (Sedimentology), and Edmund Stump (Historical Geology).

The toughest and most challenging part of his ASU/SESE experience was very simple: “staying away from all the parties, while studying and making grades.”

“My best advice for anyone wishing to enter the earthquake forecasting field is to be prepared to run into people ready to criticize you from all walks of life and/or levels of education. With diligent study and a solid understanding in foundational science and engineering, you can do anything, excel past any goal, and improve upon your own curiosities.”

Kenneth is currently a private consultant and spends time designing antenna prototypes. The prototypes are designed for field work in detecting earthquake-related, emission point sources from his radio direction finding technique, as well as for laboratory settings and/or small-scale rock fracturing experiments.