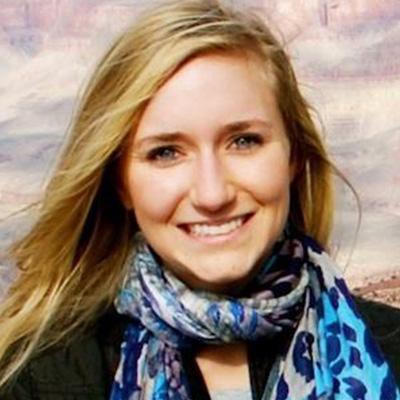 It was in her ninth grade Earth Science class that Hallie Gengl first became interested in oceanography and seismology. That same year, she attended an open house at NASA’s Jet Propulsion Laboratory where she met people who were working on actual space missions.

“This wasn’t just learning about the local world around me, but learning about other planets in finer detail utilizing robotics. I was able to talk to the people who were working on these actual space missions and they were willing to explain things to me and give me advice about what I could do to get where they were. It was really inspiring and made me want to work in science, planetary in particular,” said Gengl.

Gengl also credits JPL with helping set her sights on ASU and SESE.

“I loved the idea of the SESE program because of the way it broke the barriers between the fields of science and engineering,” she said. “But what really made me want to come to ASU, was attending the annual open house at JPL. When I spoke to the people who were working on the various Mars missions, a lot of them recommended ASU in particular for its active involvement in the NASA community and its fantastic professors.”

The great Arizona weather may have also played a role in her choice of ASU, where she majored in Earth and Space Exploration with a minor in Geography (Meteorology/ Climatology). She credits her excellent experience at ASU to the SESE community at large and in particular with LROC.

“I was incredibly fortunate to be able to work with some amazing faculty members and the whole LROC family while I was at ASU,” she said. “Having the late Ron Greeley as a professor while he was here was very influential. I thought it was pretty neat when I worked on a class research project using LROC images that built on a paper he wrote back in the 70’s based on Lunar Orbiter images.”

“The SESE faculty members are highly respected and involved in the NASA community,” said Gengl. “Being able to work with them and learn in this environment really helped me not only learn about the field, but also make important connections and become involved in the community.”

They also helped her develop the skills she needed to land her current job at JPL, where she is a scientific applications software engineer involved in software development and mission operations for Mars Surface Missions: MER-B Opportunity, MSL Curiosity, and the InSight lander, with a specialty in digital image processing for the Mars Rover/Lander engineering cameras.

Her advice for future students and recent grads is to get involved, be willing to help (even with small tasks), and learn from people who are doing what you aspire to do someday.

“Just politely asking to get involved in the things you are passionate about, and trying to learn from the people who are where you want to be is something that has helped me out so much during my career,” said Gengl.