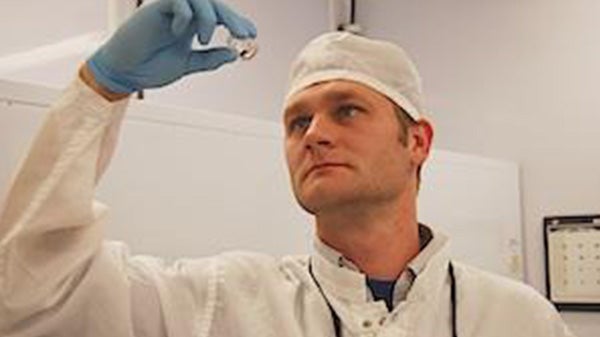 Greg Brennecka was working at Lawrence Livermore National Lab after his master’s degree when he decided he wanted to continue on and get a PhD. Multiple people he worked with suggested he check out what was developing at ASU within SESE. He went for a visit, and then he and his wife both decided to do their PhDs there.

Brennecka majored in Geochemistry/Cosmochemistry and graduated in 2011. He was co-advised by Ariel Anbar and Meenakshi Wadhwa.

“At ASU, the lab managers for each – Gwyn Gordon and Phil Janney – were both extremely helpful teaching clean lab procedures and helping me understanding how to run a mass spectrometer,” said Brennecka. “Also, I collaborated a lot with people at Lawrence Livermore National Lab, and Lars Borg was particularly influential during my time there. It was great that Ariel and Mini both supported my research at LLNL and it was a great opportunity to build relationships outside of the university while I was doing my PhD.”

Brennecka grew up spending a lot of time outdoors. Although his parents were not rock people, they instilled within in him the importance of understanding the surrounding world. “I guess that combination leads pretty well into geology…space was always cool like it was to any kid, but my brother was the real space guy when we were little, so I stayed away from it for the most part until graduate school,” said Brennecka. “My brother – two years older – has always been a lot smarter than me and was always extremely good at math/science. I am sure I benefited from his early success and learned how to be – and how not to be – a nerd from him.”

For Brennecka, one of the most important take-aways from his time at ASU was learning what really matters in research, and he credits a lot of that to Prof. Ariel Anbar and Prof. Mini Wadhwa. “People get too caught up in details and forget the big picture. What questions do you really want to answer? You should not just measure something on an obscure sample because you can, the overall story is what is important, for whatever question it is that you care about,” he said.

He also learned to not wear an Oregon State shirt to ASU football games.

“I did my masters at OSU and was also wearing an ASU hat, but I don’t think the other students appreciated the nuance of supporting both teams. Devils fans can be ruthless, even when I was just quietly sitting with my wife, who had on a very similar outfit since she also went to Oregon State.”

The most challenging part of his ASU/SESE experience wasn’t the course load – it was the 117 degree bike rides to and from campus every day. He also admitted that his first semester course he took from Mini in cosmochemistry was also pretty tough.

“It took significantly more effort than my entire two year master’s degree but I know I learned a lot more. It was my first exposure to meteorites and I really enjoyed it. The final for the class was to develop an original research idea, write up a NASA style proposal and present it to the class, along with the panel of experts she brought in to grade/intimidate us. That proposal turned into the basis for my dissertation and three of my most significant journal articles to date,” he said.

After his time at ASU, he took a postdoc position at LLNL working on both cosmochemistry and nuclear forensics. Then he applied for one of the major fellowship awards from the Humboldt Foundation, an organization in Germany that funds researchers from abroad to come to research at a German institution. He was awarded a generous grant that allowed for the purchase of a new mass spectrometer and for him to start up my own group within the Institut für Planetologie at the University of Münster.

Now, a typical work day for him includes some work in the clean lab preparing samples for analysis, a bit of work on the mass spectrometer measuring samples, and a little time on a current journal article – capped with an evening of socializing with the other members of the institute over some German pretzels and beer, of course.