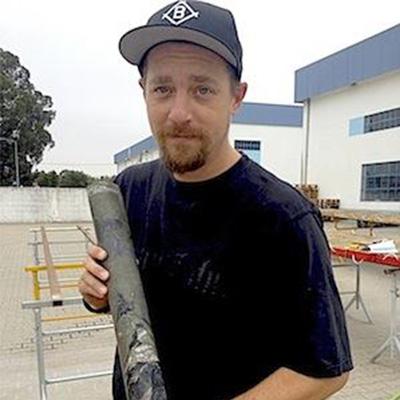 Bryan first became interested in Earth science when he was growing up. As he describes it, “My family didn't have the ability to go on vacations across the country or abroad. Instead, we did a lot of backpacking in the state of Arizona. This early exposure to the outdoors and rocks was what first drew my interest to geology.”

His mother worked at ASU for more than 30 years in the School of Engineering, and she really motivated Bryan to get into the sciences and mathematics. When he fell in love with geology right away, she was thrilled.

What advice would Bryan give to current students on a similar path?

“Take advantage of any opportunity that presents itself. Working in laboratories, volunteering, participating in clubs (especially the geology club!) will broaden your horizons," he says.

Bryan urges students to go for as diverse an education as possible. "No matter what your SESE major is," he advises, "get as much field experience as you can. The knowledge you learn among the rocks will improve all future interpretations, whether on this planet or another.”

Since graduating from ASU, Bryan has started a private consulting firm with his fellow graduate, Jeff Geier (BSc in Geology in 2008; MSc in Geological Sciences in 2011). They specialize in mineral exploration for gold, copper, silver, lead, zinc, etc. Both say their successes are specifically because of the training they received while attending ASU.

Currently Bryan is in charge of a project — his first job after his MSc — that discovered, and is now defining, a massive sulfide ‎body in one of the most famous mining districts in the world, the Iberian Pyrite Belt. This area was first exploited by the Romans, and it was the foundation of Rio Tinto, one of the best known mining companies in the world. The sulfide body was the first discovery of a mineral deposit in the area since the 1980s.

Looking over the last several years, Bryan gives much credit to the mentors who took him under their wings.

“This was the single thing that stands out from my SESE experience," he notes. "There were many, but Steve Reynolds, Paul Knauth, Ramon Arrowsmith, Everett Shock, and Rick Hervig had the biggest impact on my development as a scientist.”

He goes on to say, “These professors went out of their way to challenge and motivate my learning. In my professional experience, I feel a self-confidence when among my colleagues and that is a direct result of the challenges these mentors presented to me and helped me solve.”