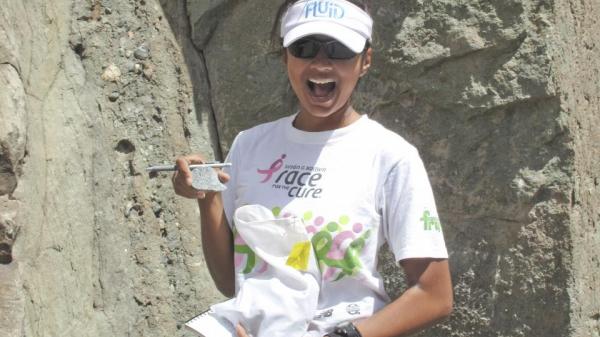 From an early age, Alka wanted to be a geologist or paleontologist. Shiny rocks fascinated her, and in the town where she grew up, a musical instrument shop owner piqued her interest further with small local fossils.

“I forgot about this during my teenage years, and I became more interested in chemistry – among other things,” says Alka. “When I got to college, I was reminded of my affinity toward geology when I signed up for an introductory geology class for non-majors, and now consider myself, broadly, a geochemist.”

Presently Alka is a postdoc at UC Berkeley and the Berkeley Geochronology Center.

It was the allure of working with Professor Kip Hodges, founding director of SESE, which caused Alka to decide to attend ASU. She also recalls an important factor being her prospective student visit, with Ramon Arrowsmith and many of his students going above and beyond to make her feel welcome. Several of those students, now long gone from ASU, are her dear friends today.

Kip Hodges was her PhD advisor, and she attributes much of her career success thus far to the guidance and support he offered. Professors Phil Christensen, Steve Semken and Alan McNamara also were influential and helpful, for many different reasons.

“Phil was very welcoming of not only me but other non-planetary science students into the world of remote sensing, and very open with our use of the Moeur Building facilities. Steve is incredibly supportive, and was always so encouraging. Alan showed me what it means to be a patient and successful teacher. His classes were the ones that I enjoyed the most, even though they originally felt out of my realm. As it turns out, what I learned from him ended up becoming an important base for much of what I do now,” she says.

“Wendy Bohon and I were on the hunt for the Karakoram Fault in Nubra Valley, and we stopped by a Buddhist monastery built atop what was obviously (to us) fault gouge. We ended up having tea with the lama (monk) who was in charge, but our method of conversing was as follows: Wendy (English/Spanish) --> me (English/Hindi) --> our driver, Angdu (Hindi/Ladhaki) --> Lama (Ladhaki/Spanish)--> Wendy. Between all 4 languages, we had a very nice conversation!”

To those who follow in her footsteps, she advises that you know your advisor/committee expectations, take advantage of collaborative projects, and always treat the support staff with kindness and respect.

“They are just as important to you completing your degree at ASU as your advisor and committee. Without the lab managers to guide you, the technicians and IT people to facilitate your work, the buildings/facility staff to fix your broken fill-in-the-blank, and the whole administrative staff who helps with all the paperwork/reimbursements/everything else, you would not be able to function as a graduate student.”