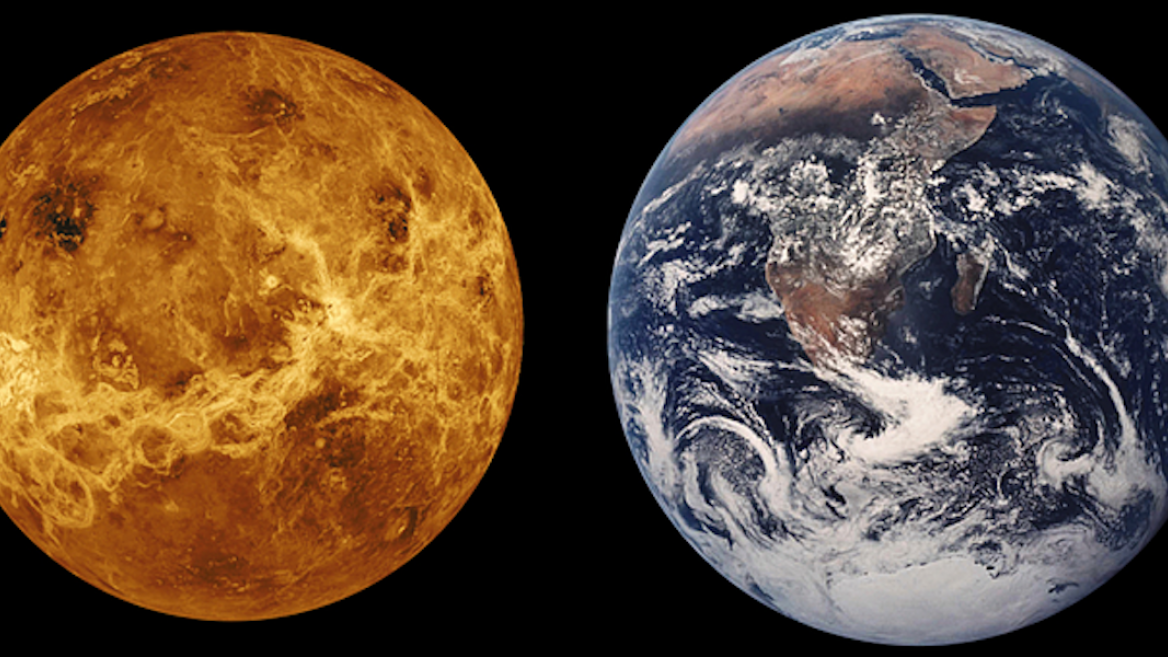 If your purpose is to test the toughness of a particular technology, Venus is an optimal site for the experiment.

Scientists believe Venus once had an Earth-like climate with a lot of water, including oceans. But the buildup of a dense atmosphere of close to 100% carbon dioxide created an intense greenhouse effect that trapped heat and boiled away water and any chance of sustaining life.

Such hostile territory is an ideal laboratory for a new project in NASA’s Planetary Instrument Concepts for the Advancement of Solar System Observations program, or PICASSO.

Close to $1 million has been awarded by NASA to a team of engineers and scientists at Arizona State University and Wayne State University in Michigan to produce a miniature seismometer — an electronic ground-motion detection sensor with a data recording system — capable of operating effectively in the extreme Venusian environment. Ira A. Fulton Schools of Engineering Professor Lenore Dai (right) pictured with Elizabeth Nofen, who conducted research in Dai’s lab to earn her doctoral degree in chemical engineering. Dai will provide research opportunities to two doctoral students in the research project she is leading for the NASA PICASSO program. Photo by Jessica Hochreiter/ASU

Professor Lenore Dai, a chemical engineer and director of the School for Engineering of Matter, Transport and Energy, one of the six Ira A. Fulton Schools of Engineering at ASU, is leading the endeavor to better understand the workings of the interior structure of Venus.

Like Earth, Venus also has a central core, a mantle of rocky materials and a crust. So, getting a clear picture of seismic (ground motion) activity on Venus has long been a target for scientific exploration.

“The surface of Venus is a nasty place,” said one of Dai’s co-investigators, Associate Professor of Research James Lyons, a planetary scientist in ASU’s School of Earth and Space Exploration, but the team’s prototype seismometer “has the potential to survive for extended periods of time — months or maybe longer — on the surface, and can be deployed at any angle. A suite of these seismometers deployed on the surface would revolutionize our understanding of Venus.”

Dai says a seismometer that can handle the stress of the climatic conditions on Venus will provide a template for next-generation seismometers and other sensing technologies capable of performing their missions throughout the solar system.

Co-investigator Joseph O’Rourke, a planetary geologist and assistant professor in ASU’s School of Earth and Space Exploration, is focusing on the planet’s dynamics “from crust to core.”

Gathering seismic data from the interior of Venus “will help define how the seismometer will need to perform to answer high-priority science questions,” O’Rourke said. “I think our prototype seismometer will become a great candidate for advanced development and, eventually, inclusion on a space flight mission (to the planet).”

Co-investigator Edward Garnero, a professor and geophysicist and an expert in geodynamic modeling in the School of Earth and Space Exploration, is providing a seismic and geologic map of Venus for the team. The work of another co-investigator, Yong Xu, a professor of electrical and computer engineering at Wayne State University, focuses on electrical circuit research.

The team’s proposed miniature seismometer is based on a liquid sensing mechanism that uses a molecular electronic transducer, or MET.

Similarities between the cores, mantles and crusts of Venus and Earth make the planet’s interior particularly intriguing to scientists and engineers. The two planets have large iron cores, rocky silicate mantles and long histories of seismic activity. Photo courtesy of Pixabay

She has also been awarded a new grant of more than $437,000 from NASA to support research aimed at developing a MET sensor to be integrated at the system level for potential moon missions.

MET-based seismometers include an assemblage of devices and components. MET technology also uses a fluid to respond to accelerations of seismic activity. The fluid flows through a sensing component that produces a measurable current to provide highly precise ground motion data.

In addition, the seismometer doesn’t need to be particularly large or heavy to perform efficiently, and it needs only a relatively low amount of energy to operate and can be installed at arbitrary or random angles.

Karin Valentine, media relations and marketing manager for ASU’s School of Earth and Space Exploration, contributed to this article.