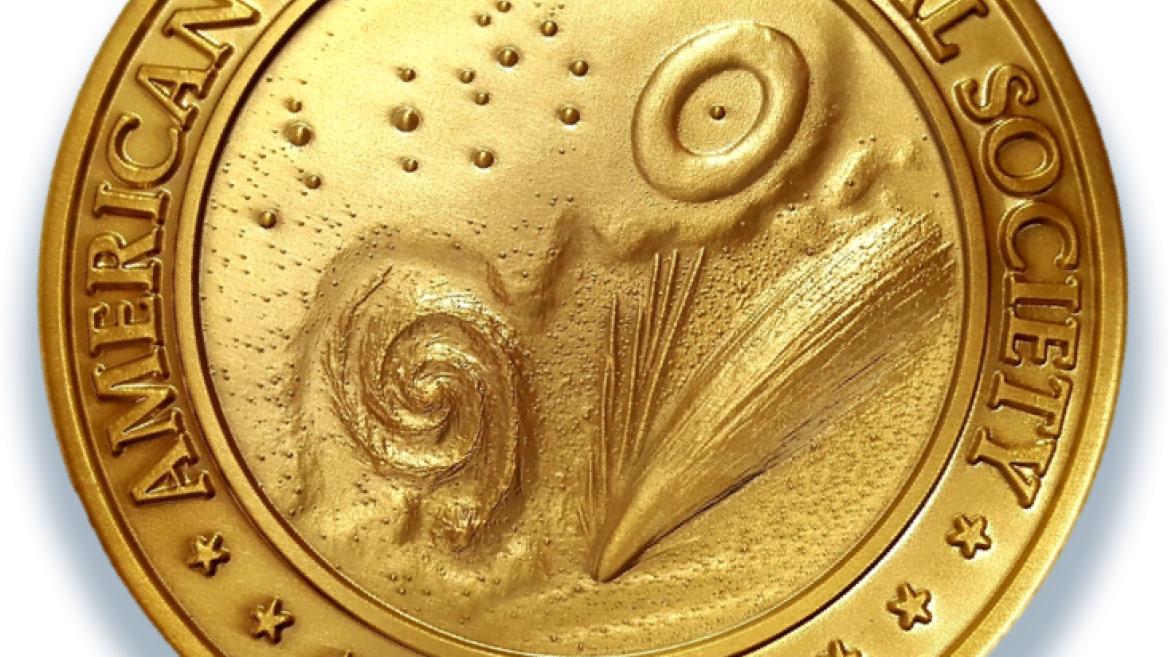 Chambliss medals recognize exemplary research by students who present at one of the poster sessions at the meetings of the AAS. Only six awards were granted nationwide to graduate students.

Each awardee is honored with a Chambliss medal, which is named after Carlson R. Chambliss of Kutztown University, who donated the funds to support the prize.

Harish is an astrophysics doctoral student in the School of Earth and Space Exploration, whose research is primarily focused on galaxy formation and evolution using emission-line galaxies. He plans to continue exploring such galaxies to better understand the dynamics of galaxy evolution, using multiwavelength studies.

“It is an honor and privilege to be the recipient of the Chambliss Astronomy Achievement Award,” said Harish.

“This recognition instills great confidence and encourages aspiring astronomers like myself to reach greater heights in our research.” “Santosh is a fantastic scientist with great attention to detail,” said School of Earth and Space Exploration astronomer Sanchayeeta Borthakur. “I am truly excited to see him grow and shine.”

Nayyar is a computer science doctoral student at ASU’s School of Computing, Informatics, and Decision Systems Engineering. She is also a member of the Autonomous Agents and Intelligent Robots (AAIR) research group.

Her research focuses on key artificial intelligence principles to help build efficient systems that can reason, plan and act under uncertainty. In collaboration with co-adviser professors Sanchayeeta Borthakur and Siddharth Srivastava, she studies probabilistic approaches to automate physics-based detection and identification of intergalactic clouds. “My experience at the American Astronomical Society meeting has opened my eyes to the immense potential of interdisciplinary collaborative research,” said Nayyar.

“I believe in, and remind myself every day, that satisfaction in research comes with a struggle for discovery. I hope my work now, and in the near future, will help in advancing our understanding of the universe and its evolution."

Nayyar’s achievement is particularly exciting because she won this award as a computer science student and presented her AI research on using first-order probabilistic logic for reliably inferring properties of intergalactic space far beyond our own galaxy.

“Not only did she succeed in explaining her work to an entirely different academic community, but she did it so well that she won an award for it! She's helping build bridges across research communities in true ASU style,” said Srivastava.

Padave is an astrophysics doctoral student in the School of Earth and Space Exploration. Her current research is an investigation of the connections between stars and interstellar gas in the outskirts of galaxies, which helps us understand galaxy growth and evolution. “I am honored to receive this award and grateful for being recognized,” said Padave. “Winning this award is a big boost for my career. I feel like I have taken the first step on the long staircase of success but there is always more to learn, experience and achieve. It also makes me believe a little bit more in myself and it motivates me to work harder to successfully complete my PhD and pursue a career in research.”

She is currently working with School of Earth and Space Exploration professors Sanchayeeta Borthakur and Rolf Jansen.

“Padave is an extremely motivated and budding scientist, who is forging her own path,” said Borthakur. “Her work uses state-of-the-art observational facilities available to our graduate students through the Arizona telescope system.”