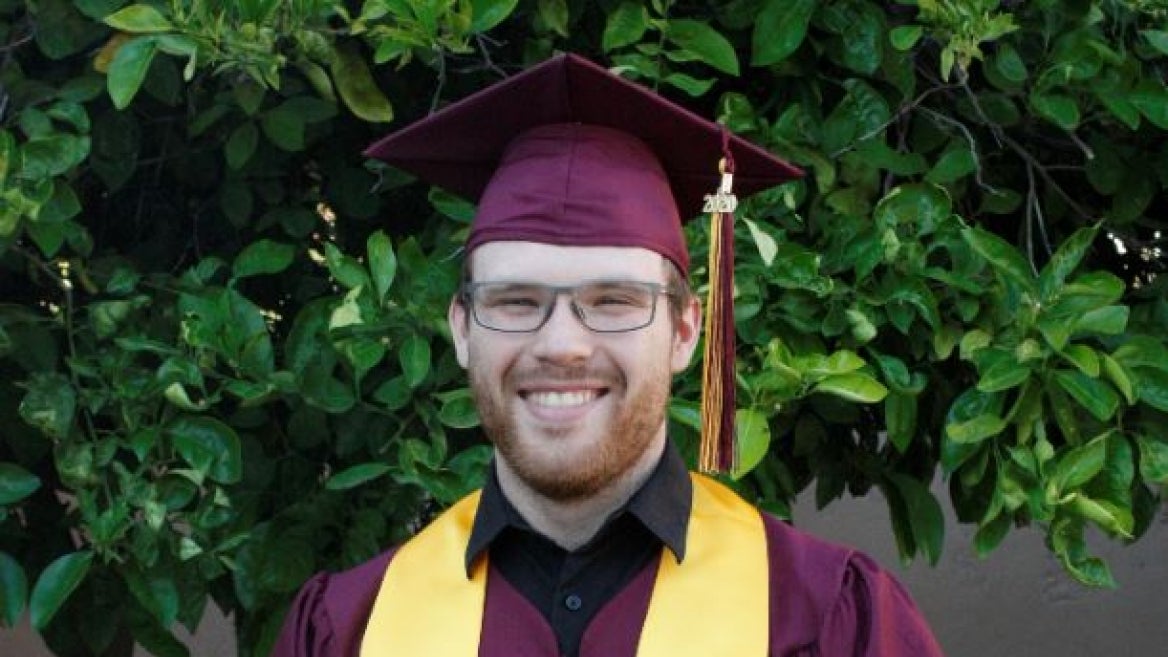 Editor's note: This story is part of a series of profiles of notable spring 2020 graduates.

Jacob West is graduating this spring with a bachelor’s degree in geological sciences from Arizona State University’s School of Earth and Space Exploration. West, who is a triplet, will join 16 other family members who have earned their degrees at ASU over the years, including one of his sisters who earned her degree last year. His other sister will graduate this December.

West made the most of his time at ASU, earning a field geology certificate, working at the School of Earth and Space Exploration's Mars Space Flight Facility as a spectrometer lab technician, and participating in a study abroad program in Sicily, where he studied how geologic environments interact with people and could create hazards.

“I got to observe several volcanoes during my stay including Mount Etna and Stromboli,” says West. “I also was able to experience Sicilian culture and learn about their history, language and food.”

It was this trip to Italy that got West particularly interested in studying volcanoes, which led to his honors thesis under the guidance of School of Earth and Space Exploration Associate Professor Amanda Clarke.

“My honors thesis was centered on studying the habits and compositions of volcanic bombs produced by the El Tecolote cinder cone in the Pinacate Volcanic field,” says West. “My goal was to try and map the bomb distributions, create archetype or species classifications and determine areas on species die-off or concentrations.”

As part of our series of features celebrating students graduating this spring, we reached out to West to learn more about his experiences at ASU and his goals for the future.

Answer:.I think my "aha" moment was when I was out hunting with my grandpa and he started to explain why there was a hill here and not over there, what the rock we were standing on was, where it came from, so on and so forth. It was at the point I realized that I wanted to know so much more about the rocks, and I knew that I would enjoy figuring it out. Thus, I decided to major in geological sciences.

It surprised me to see how interconnected everything is, how volcanoes affect tectonics, how tectonics affect sedimentation, etc. It was mind-boggling how one event could trigger possibly a dozen others; on the massive tectonic scale down to the small grains of sand, everything has a reason for doing what it is doing.

Q: Which professor taught you the most important lesson while at ASU?

A: Stephen Reynolds gave me the best piece of advice that carried me through many of my courses. He told me that you can't just look at the big picture, because you'll miss the details that the small picture is trying to tell you. With those small details, you can often see that the big picture isn't enough and sometimes you need a bigger picture to understand everything. Long story short, don't gloss over the little details, no matter how insignificant they seem.

A: For those of you still in school, my advice is two-fold. Get to know your professors, because they can open doors you never even knew existed and put the effort in to know the material, because odds are that's what you'll use for the rest of your life to build yourself up and establish a good position in the industry.

A: After graduation I plan on working in the industry for a year or two, working as a consultant or geotechnician, building skills that will help me choose what direction I want to go for a master's degree.