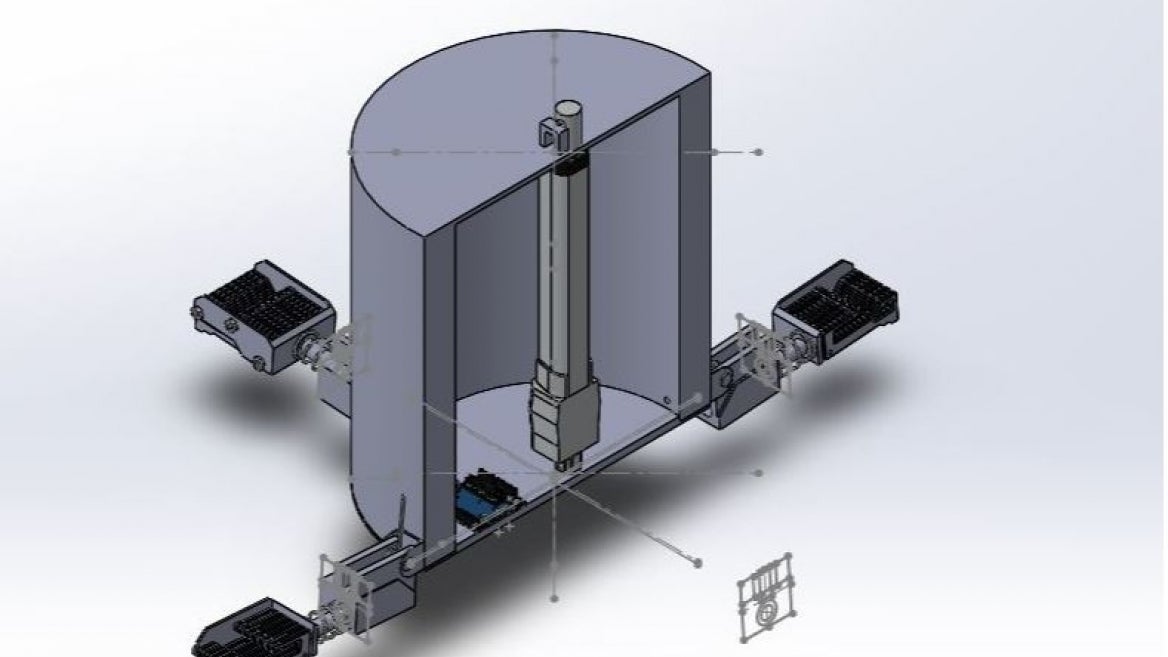 While the ASU-led NASA Psyche mission launch is still a little more than two years away (projected for August 2022), teams of undergraduate students throughout the U.S. have been working on their senior capstone projects for the mission, applying their knowledge and skills to real-world projects.

At ASU, one such team, with the project title “Sampling System for Hypothesized Surfaces,” has two major milestones to celebrate: It is the first School of Earth and Space Exploration team to complete their Psyche mission capstone project, and each student will be graduating this May.

Their Psyche capstone project envisions a future space mission to Psyche where, instead of orbiting as the current mission plans to do, a spacecraft would land on the asteroid and explore and sample the surface of Psyche, which is likely made largely of metal.

The team project, with mentorship from the School of Earth and Space Exploration Associate Professor and astrophysicist Christopher Groppi, was to design a prototype sampling system capable of effectively extracting scientific samples from the asteroid’s surface, keeping in mind other constraints like gravity, and potentially creating a caching system for the samples.

As part of our series of features celebrating students graduating this May 2020, we reached out to this team to learn more about their capstone project and their plans for the future.

Question: What was your team’s favorite part of this project?

A: Our favorite part was the fabrication process. Beyond designing something and doing a bunch of paperwork, we actually got to build something. We soldered, programmed, welded, machined, laser cut, molded and casted, and utilized various other power tools for constructing our project. Unfortunately, due to the pandemic our ability to fully bring our project to life was impeded. However, we laid the foundations and did a lot of the work for future capstone teams to complete this project.

Q: What was the most difficult thing you accomplished as a team?

A: Obtaining an ultrasonic drill was probably the hardest part. It's such a niche and expensive device, and we had to reach out to several companies and figure out how to get it delivered to us during the pandemic.

Q: Why did you pick the Psyche mission for your capstone?

A: We picked the Psyche capstone because we are particularly ambitious individuals who wanted to break new ground in space exploration and robotics.

Q: What was special about this project?

A: This project was special because it was completely open-ended. We could get incredibly creative. It's also a NASA-affiliated project, so that sounded pretty cool and important. We even ended up reaching out to some scientists and engineers from JPL to provide insight and collaborate with us.

Q: What is something fun or unique about this team that you could share?

A: We were a fairly academically diverse group of people, so it was nice to work with various scientists and engineers. Thankfully, our team member Ciara Sypherd was also working on another Psyche capstone project involving a rover with her aerospace engineering team, and this allowed us to think things through better and develop a comprehensive system.

Q: Does everyone on the team want to work for NASA or a space mission in the future?

A: Everyone on the team wants to be involved in some space mission, but maybe not just with NASA. A couple of us will be moving onto grad school and getting into research.