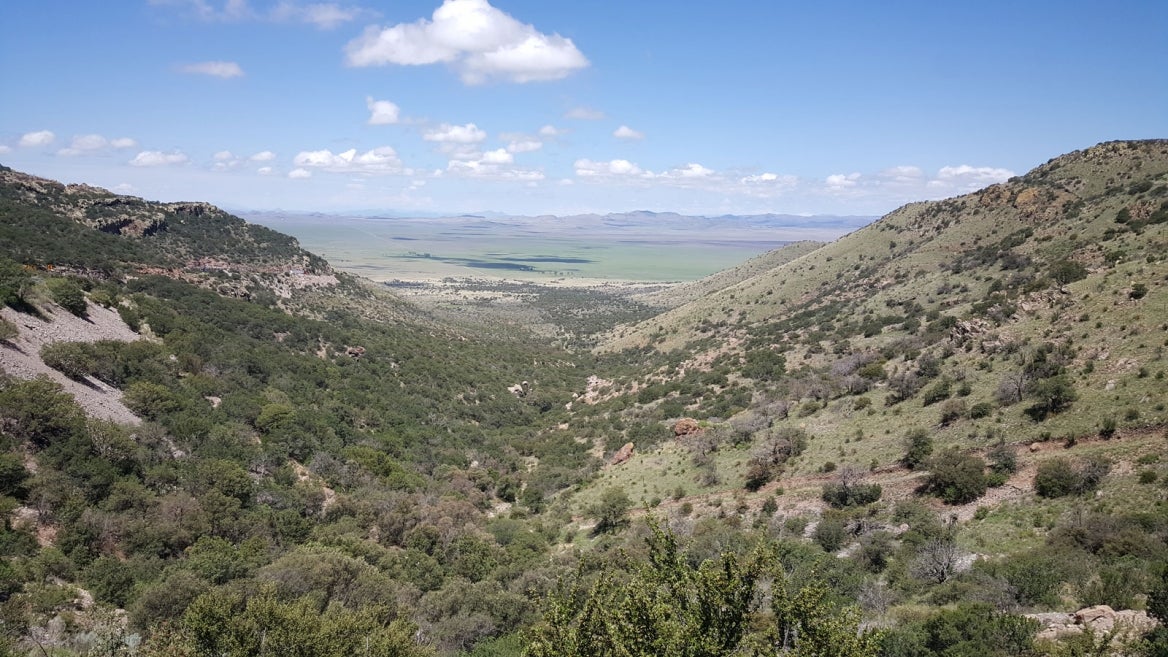 When a hurricane is bearing down on the Florida coast, any one of countless well-established models can forecast the projected path of the storm. But when a summer monsoon is brewing over the deserts of the Southwest, no reliable models exist to help predict this phenomenon.

The key, it turns out, lies in the first two inches of desert soil.

Two Arizona State University hydrosystems engineering professors, Giuseppe Mascaro and Enrique R. Vivoni, are filling this forecasting void. They are creating the first hydrologic modeling system that uses satellite data from NASA and other space agencies to increase the spatial resolution of soil moisture estimates generated from orbit — a process known as “downscaling.” The model accounts for the water cycle on land and its interaction with the atmosphere. Their results were detailed in the paper “Closing the Loop of Satellite Soil Moisture Estimation via Scale Invariance of Hydrologic Simulations,” published in the Nature Publishing Group journal Scientific Reports.

Water content in soil evaporating into the atmosphere is an important source of fuel for monsoon storms in Phoenix, and the ability to track what’s happening on the ground gives a clearer forecast of monsoon systems in the atmosphere.

This model, which has been 10 years in the making, represents a major shift in how society can understand and make decisions about water consumption, land-use planning and natural disasters such as flooding.

“The model is that link between satellite observations everywhere and the ability to make decisions at local sites,” Vivoni said. “It makes satellite products actionable information.”

The yearly monsoon storms that occur in the Phoenix area between mid-June and mid-September are caused by a combination of oceanic, atmospheric and soil moisture conditions that span the United States and Mexican borders. The pronounced pattern of thunderstorms and rainfall, known as the North American monsoon, generally starts as moisture in the Gulf of California or rainfall evaporated from the soil in Mexico and travels as humid air into the U.S. before it forms the storm cells that drench Arizona in rain.

“(Between winter and summer) there is high variability (of soil moisture) because we have the monsoon, which brings a change in hydrologic processes and land surface conditions,” Mascaro said.

Until recently, each country has individually observed different parts of the North American monsoon weather system, operating without coordinated efforts nor a cohesive model of the phenomenon.

In fact, this has been an area of research that has received little attention from either government until recently.

In 2004, Vivoni established the first attempt to create a network of measurement stations in the Rio Sonora basin in northern Mexico, chosen due to its variability in soil moisture conditions. There, he and teams of students collected detailed field data about rainfall, soil moisture, evapotranspiration (the transfer of water from plants and soil to the atmosphere through evaporation) and other hydrologic conditions in the basin.

Over the years, Vivoni’s efforts in various research projects have earned funding from NASA, the National Weather Service, the National Oceanic and Atmospheric Administration and the National Science Foundation to establish a model of the hydrologic system, particularly of soil moisture.

He also worked to form new partnerships with researchers at several institutions along the U.S.-Mexico border, including two universities in Sonora, Mexico, to help coordinate research efforts between the two countries.

The project draws on Mascaro’s statistical expertise to solve what is essentially a “big data” problem.

For decades, NASA and other space agencies have been deploying satellites that use sensors to infer soil moisture conditions for nearly all the land on Earth.

Typically, satellite imagery represents large areas measuring 50 to 100 square kilometers (about 20 to 40 square miles) per data point. However, using this scale of information about soil moisture isn’t very helpful when you’re trying to see conditions for a small town in northern Mexico or a family farm in southern Arizona where soil moisture can vary every 100 feet, for example.

Mascaro is using mathematical concepts from fractal theory to create an algorithm that takes the low-resolution satellite data and “downscales” it to be high resolution. Fractals are repeating structures that appear commonly in nature. Think of a tree trunk that splits into branches. That same pattern repeats as those branches “branch” off into smaller ones, continuing to branch off even as far down as the veins of leaves.

“Researchers studied these types of fractal objects and realized that nature has a lot of variability that can be explained through this type of mathematical approach,” Mascaro said. “Fractal geometry can explain these patterns at different scales,” such as from a satellite image taken hundreds of miles above the Earth’s surface and a picture taken by a plane flying just hundreds of feet off the ground. This concept is also known as scale invariance.

Mascaro’s combines his statistical algorithm with additional data about terrain, soil conditions and vegetation cover to create the hydrologic model. With Mascaro’s scale-invariance calculations, Vivoni’s model can account for both the satellite data (the large branches) and the output of the model at a much higher resolution of 100 meters, or about 330 feet (the veins of the leaves).

The field data collected over the years by Vivoni’s team from the stations in the Rio Sonora basin helped Mascaro and Vivoni confirm the effectiveness of the model, which used only satellite, terrain and hydrologic data.

“The hydrologic model was tested locally at each station where we had the sensors, and we did some aggregation to understand if the model was doing a good job,” Mascaro said.

Both ground measurement stations and satellite data sources are important to create a reliable model to forecast soil moisture conditions.

The next step for Mascaro is to see how robust the model is when taken to other locations to further validate its effectiveness.

Modeling something this complex at such high resolutions requires a vast quantity of data and a lot of computing power. Mascaro and Vivoni leveraged ASU’s high-performance computing resources to model 10 years of the hydrology in the Rio Sonora basin, which took nearly a month.

While it’s a time-consuming and expensive process, the work provides the framework for the other southwestern states affected by the North American monsoon.

“We’ve created a method that others can replicate and use to create a model with satellite data in their region,” Vivoni said.

Beyond the monsoon, understanding and being able to forecast soil moisture has a big impact on agriculture, land use, flooding, wildfire and the local water supply.

Agriculture in arid regions relies on irrigation, but if farmers can forecast the moisture levels of specific areas of their farms, they can make smarter decisions on when and where to irrigate to take advantage of the current soil conditions.

Cattle ranching is a very large industry in Arizona and northern Mexico — using more than 70% of the land in the state of Arizona. The hot and dry months of May and June are especially hard on cattle and ranchers as grasses don’t grow and watering ponds shrink. When monsoons are late, the cattle have to survive hot, dry conditions even longer.

To get by, ranchers have deforested areas and planted non-native grasses that can withstand extended dry conditions. But if ranchers can get a detailed picture of the soil moisture conditions of their ranches, they can lead their cattle to pockets of land where moisture, and therefore grasses, will be present.

The probability of flooding can also be predicted based on soil moisture conditions. Think of the ground as a bucket. When it rains, the bucket fills up. The ground, like a bucket, has a limit to what it can hold and the excess runs off in the form of flooding.

Fires represent the opposite soil conditions of a flood. When the soil moisture levels are low, there are higher chances of wildfires. Being able to monitor the hydrologic conditions of a region at high spatial resolutions could help pinpoint areas at the highest risk for wildfire.

Groundbreaking research is often led by faculty members, but it would not be possible without the contributions of students.

“This research is enabled by graduate students and postdocs,” Vivoni said. “They are the engines of research at the leading edge bringing the latest technologies into the field.”

For eight summers since 2004, more than 150 students from undergraduates to postdoctoral researchers participated in summer fieldwork programs to set up a monitoring network in the Rio Sonora basin in northern Mexico.

With their help, Vivoni was able to collect reams of field data that didn’t exist before he began this research.

“It has changed students’ lives,” Vivoni said. “Fieldwork really engages students and helps shape their future. Many of the participants went on to earn degrees or work professionally in water resources as a result of these experiences.”

In fact, before he became an assistant professor at ASU, Mascaro was one of the students who conducted fieldwork at the Rio Sonora basin.

Ara Ko, a hydrology and water resources science doctoral student who graduated from ASU in 2018, is taking the skills she learned working with Mascaro and Vivoni at ASU to industry. Ko is a water research engineer at Atkins, a design, engineering and project management consulting company.

Ko co-authored a recent paper published in Nature Scientific Reports. Her role in the research was to analyze statistical variability of soil moisture, calibrate the algorithm to scale low-resolution satellite data to high-resolution data, and set up and apply the model to create a database useful for local decision-making.

“It was an amazing experience working on soil moisture research (with Mascaro and Vivoni). These research activities provided me with a broad and strong background of hydrologic modeling including research abilities and professional modeling skills,” Ko said. “I believe all my experiences and skills I obtained while conducting research helped me find an engineering position and get involved in major projects as soon as I joined Atkins.”

Ko has been working on several flood risk mapping projects at Atkins funded by the Federal Emergency Management Agency, or FEMA, that use hydrologic and hydraulic models.

Though Vivoni and Mascaro have made great progress on the hydrologic forecasting model, their work is not done. Vivoni is still leading summer research experiences for graduate students to learn about land and water resource issues along the U.S.-Mexico border.

An upcoming summer program is funded by the Babbitt Center for Land and Water Policy, which helps communities make informed decisions about water and land use specifically in the Colorado River basin. The center's involvement signifies the importance of the data collected by students as part of Vivoni and Mascaro’s research to policy- and decision-makers in the region.

The program is part of a wider effort by the Ira A. Fulton Schools of Engineering to invest in water resource research and faculty. Hydrosystems engineering faculty members in the School of Sustainable Engineering and the Built Environment, one of the six Fulton Schools, are using machine learning, remote sensing and numerical modeling to develop technology surrounding water resources.

“The Ira A. Fulton Schools of Engineering has provided the intellectual environment for high-achieving faculty members to develop new tools and recruit students who together are innovating in the water resources sector,” Vivoni said.