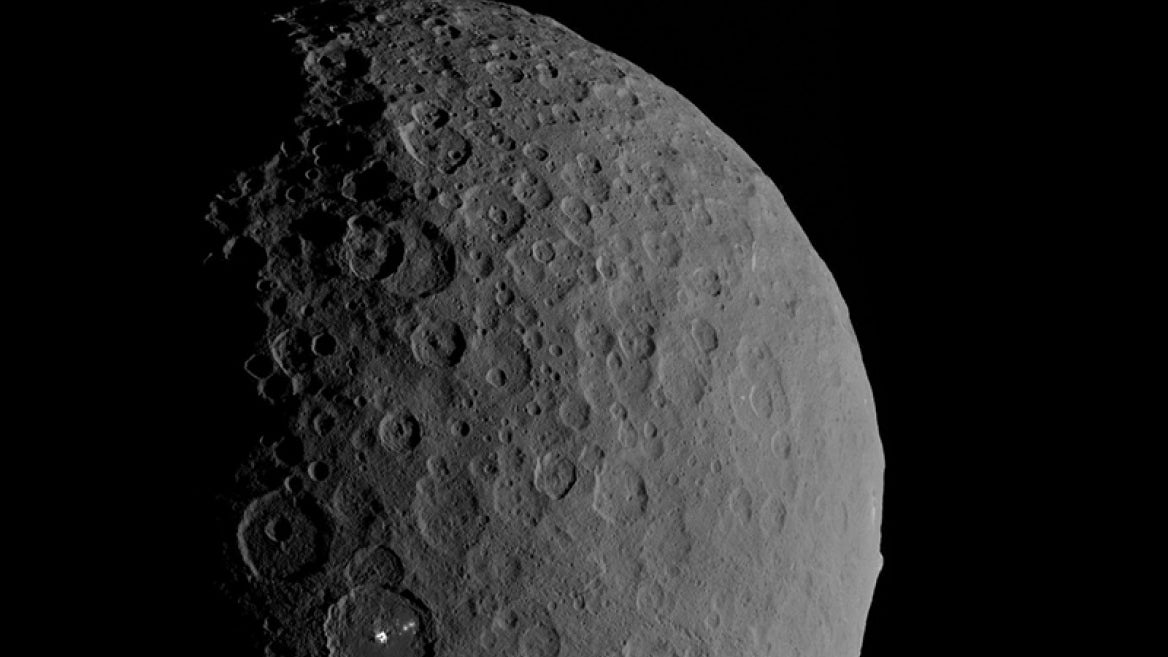 Dwarf planet Ceres: An asphalt body in the solar system?

The dwarf planet Ceres is the largest object in the main asteroid belt between Mars and Jupiter. In 2015, it became the first dwarf planet to receive a visit from a spacecraft by NASA’s Dawn mission. That mission has provided a treasure trove of data for scientists seeking a greater understanding of Ceres and our solar system.

With the information provided by Dawn, one question planetary scientists are trying to answer about Ceres is its interior composition. This body has a relatively low density, which means that it contains light materials in addition to rocks. The light materials are generally thought to be water ice and ice-like gas hydrates concentrated in the upper interior of the body.

But could the light materials be something else?

In a recent study published in Icarus, Arizona State University School of Earth and Space Exploration researcher Mikhail Zolotov analyzed data on Ceres from Dawn. His goal was to assess the interior structure and composition of the planet and investigate how it was formed and evolved.

Dawn’s exploration of Ceres provides data on the morphology, topography and composition of the surface, together with the body’s exact density, gravity and shape. From this data, he determined that Ceres could contain between 20% and 30% of organic matter by volume. The organic-rich body would be similar to road asphalt pavement on Earth.

“A mixture of sand and bitumen, used to make road asphalt, could be an analog of Ceres’ materials,” said Zolotov.

And because organic matter has much lower density than rock, ices (including water ice and ice-like hydrates) would not be the only materials that could explain the low density of Ceres. Furthermore, ices are not needed to explain the density of the organic-rich body.

In addition, Zolotov analyzed the evidence of significant flattening of the body at the poles, which indicates a very mild density increase toward the center of Ceres.

“This could be due to a mild compaction of organic-rock mixtures and suggests a lack of low-density materials like ice closer to the surface, which corresponds to a chemically uniform and undifferentiated body,” he said.

The elevated organic content together with earlier detected carbonates and ammoniated minerals on Ceres’ surface suggest a major contribution of cometary materials that are rich in organic matter, carbon oxides and ammonia.

“Ceres and comets likely formed at larger distances from the sun than parent asteroids of known meteorites,” said Zolotov.

Ceres and similar organic-rich asteroids could have been delivered to the asteroid belt within the first 10 million years after the formation of the solar system, possibly through the gravitational influence of giant planets.

Zolotov hopes that we can one day conduct a sample-return mission to Ceres, or find an asphalt-like meteorite, to further help us understand how Ceres and similar bodies formed and evolved.