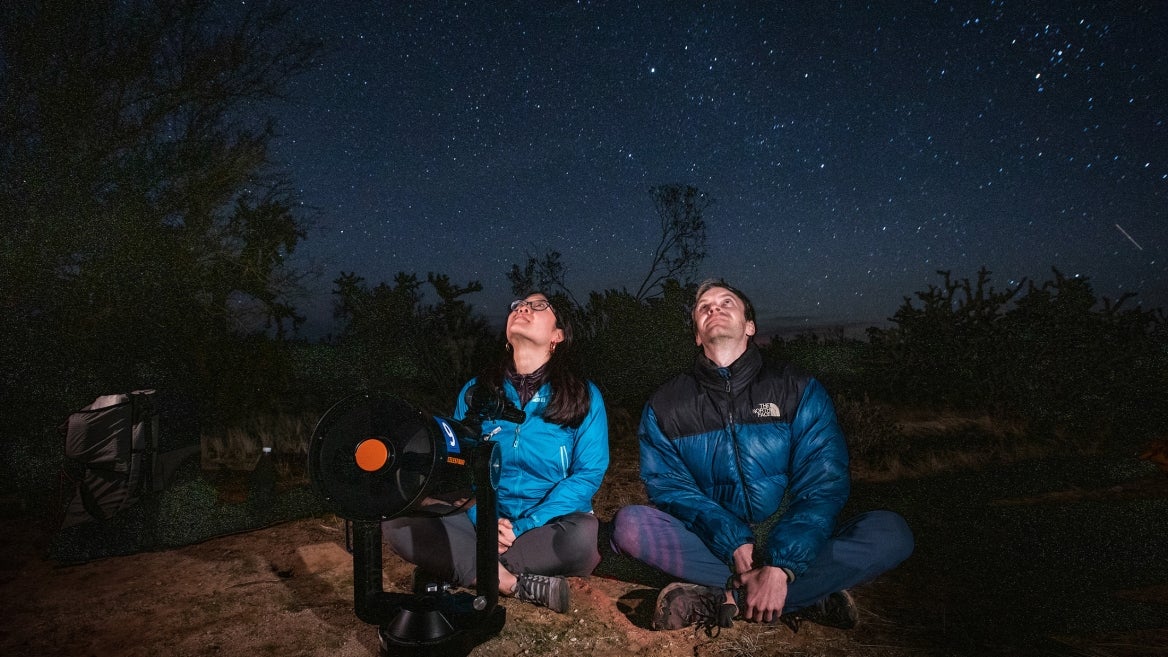 Explore the stars and the wilderness

Most vacations are additive experiences: They add something to you. Scuba diving in the Maldives. A rave at Versailles. Sailing off Cape Cod.

All fun, yes, but an experience that strips you down until you are reduced to your barest expression — an organism roaming the planet — can bring as much, if not more, joy. No house. No car. No roads. No furniture. Staring at the stars above while perched on a rock ledge is something you can share with an Ice Age hunter who lived 30,000 years ago.

That’s the point of a unique class in wilderness astronomy being offered this spring at Arizona State University. Combining a weeklong backpacking trip with astronomy and planetary science, students will learn the night sky, along with how to navigate the backcountry.

“Astronomy is being part of a shared human heritage,” said co-instructor Melodie Kao, a NASA Hubble postdoctoral fellow in the School of Earth and Space Exploration. “Every person before us and every person after us will wonder about the night sky. When we’re out there for the first time and really seeing what the Milky Way really means or discovering how and why stars move, that same thought process has led to a lot of human innovation and progress over millennia. This class is basically about connecting to something that is fundamental to what it means to be a human being on this planet Earth in this universe.”

The trip will be seven days through Sedona’s Red Rock country: three days on the trail, a layover day for rest, and three more days on the trail. Kao and co-instructor Parke Loyd, a postdoctoral researcher in the School of Earth and Space Exploration, called it their passion project.

“We’re both avid backpackers and of course we’re also passionate about astrophysics,” Loyd said. “It occurred to us that there’s a ton of overlap between those two things. I know that I spend a lot of time thinking about how our planet works and also using some of the technical skills I’ve learned to navigate and read maps and stuff like that when I’m in the backcountry. When we recognized that overlap, and also how passionate we were about those two subjects, we just wanted to share it with students.”

“We can leverage some of those skills to make us more comfortable and safer in the backcountry,” he said. “Some examples would be like: we will talk a lot about how the atmosphere works, and when the students sleep out under a cloudy sky, they can actually sense the greenhouse effect, which is really important in determining the surface temperature of planets. We’ll also teach them how to find their latitude using the stars.” The Wilderness Astronomy course is offered in the spring. Students will learn concepts in astronomy, physics, planetary science and outdoor camping that help them better understand and better explore Earth. Photo by Charlie Leight/ASU Now

Students will also learn a truly great skill: how to read a topographic map and use it with a compass.

“It’s a skill that you can use broadly,” Loyd said. “If you can read a topographic map, then you can essentially interpret any three-dimensional data set that has been represented with contour lines on paper like that. Of course it’s also extremely practical. Last year that was what students were most excited about: learning how to navigate with a map and compass.”

After they’ve learned the basics, they will be on point to experience an amazing thrill: using it for real, on their own. Naturally, paying close attention to landforms is part of that education. Each day one student will lead the group using their new skills.

It’s all part of getting students closer to the Earth and cosmos.

“That’s a huge part of my motivation,” Loyd said. “The reason I do both backpacking and astronomy is that they both make me really hyperaware of how much bigger the universe is than I am. I personally find that extremely satisfying to know and I hope the students do also.”

What if you’re not an astronomy major and you’ve never spent a night out? In both cases you’re welcome to sign up. The idea is to learn, Kao said.

“The No. 1 thing I hope they learn is to believe in themselves, and to trust that even in the face of something that may seem intimidating, whether that’s science or a weeklong backpacking trip or both, that they have what it takes to do either of them, and do them well,” she said. “This class is geared towards both nonmajors and people who don’t have a lot of experience in backpacking. One of the most rewarding aspects of it from last year for both me and Parke was that we got to watch students really transform in their self-confidence and trust in themselves.”

Kirsten Terrill, a senior majoring in anthropology, and DJ Morales, a conservation biology grad, both took the class last year.

“It was cool to learn about astronomy in an outdoor setting and not sitting in front of a screen,” Morales said. The course highlight is a week-long backpacking trip during spring break near Sedona. Photo by Charlie Leight/ASU Now

Terrill thought she was going to hate it. She’d never been camping before, let alone for a week. But by day two she felt comfortable.

“Being able to see the actual night sky was amazing compared to the city,” she said. “The quiet was really nice.”

Morales has used a map and compass once since the class.

“I’ve been hiking but I didn’t use a map and compass,” Terrill said. “I’d feel comfortable doing it if I had to.” However, she uses the sun when she hikes and keeps a close eye on landforms.

Morales was concerned about the physicality of it. “It was definitely doable,” he said. “I recommend the course for anyone who likes the outdoors and the night sky.”

At its core, the class is about exploration.

Science pops up in all aspects of the trip. Last year, some students couldn’t figure out what caused condensation on the inside of their tents.

“Instead of telling them how it worked, we would start a conversation with them and ask certain questions,” Kao said. “They would figure it out themselves. The first step to science is developing observational skills. … A lot of science comes from a deep love of the natural world. Arizona is just such a spectacular example of the natural world, whether it’s the night sky or being out in a desert mountain region, this is sort of like science at its purest rawest form — being there in nature and figuring out how it works.”

Top photo: Postdoctoral astrophysics researchers Melodie Kao (left) and Parke Loyd, of the School of Earth and Space Exploration, observe the countless stars, and a few shooting stars, in the near-dark sky by the Tom Mix Memorial, south of Florence, Arizona, on Dec. 13, 2019. Photo by Charlie Leight/ASU Now