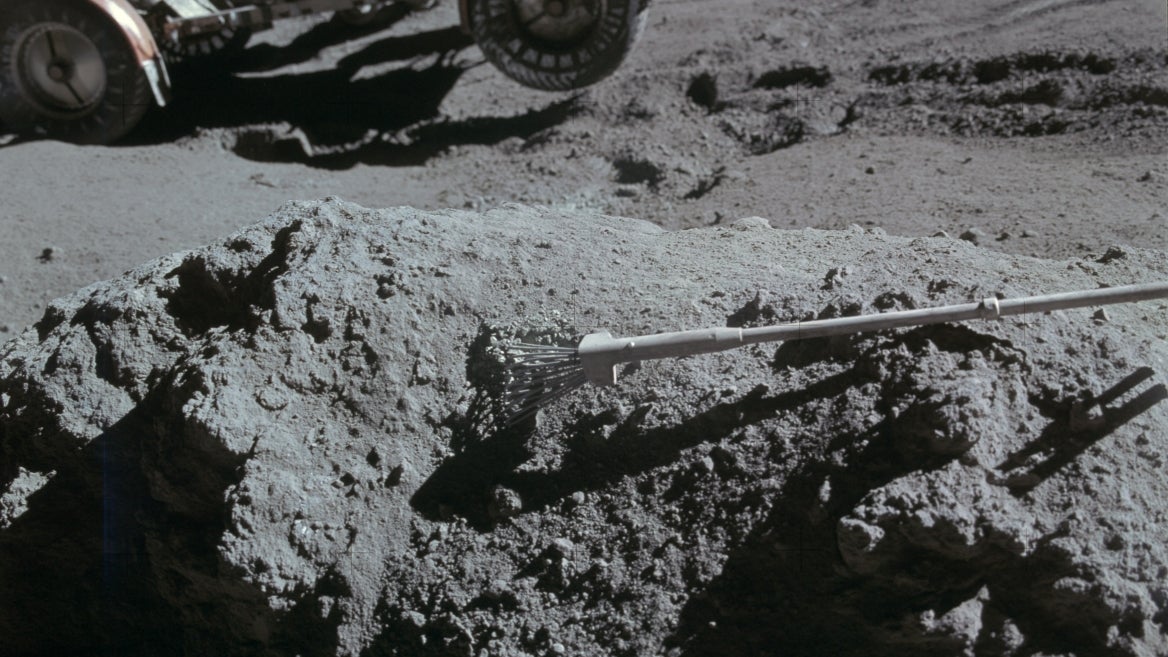 The moon is thought to have formed 4.5 billion years ago after a planetary embryo known as “Theia” collided with proto-Earth (Earth at an early stage). This collision, referred to as the “Giant Impact,” was the last major event during Earth’s accretion.

In a recently published article in the journal Geochemistry, authors Steve Desch of Arizona State University’s School of Earth and Space Exploration and Katharine Robinson of the Lunar and Planetary Institute in Houston have carefully analyzed lunar samples to help determine the size and composition of Theia. With these new models and calculations, they provide more clues about the origin of the moon and the origin of Earth’s water, two linked mysteries of the solar system.

“Figuring out what Theia was made of has just about everything to do with the question of how Earth got its water, and whether other Earth-like planets around other stars should have more or less water,” Desch said.

For their study, Desch and Robinson used Robinson’s previous work on moon samples collected during NASA’s Apollo 15 mission that contain apatite (a calcium phosphate mineral) that can incorporate hydrogen.

To analyze the Apollo 15 samples, Robinson used mass spectrometry to determine the ratio of deuterium (a heavy form of hydrogen) and regular hydrogen in the sample. This ratio provides information about the hydrogen’s source.

“Basically, I used an instrument the size of a large room with a four-ton electromagnet to make holes about one-third the width of a human hair in moon rocks,” Robinson explained. “We then measured the material that sputtered out of these holes.”

From her analysis, Robinson found that these particular Apollo 15 mission samples had apatite with a very low deuterium-to-hydrogen (D/H) ratio, much lower than any other known planetary materials.

What they needed to understand next was why.

Desch and Robinson then incorporated the data from the Apollo 15 samples into calculations and modeling. From this, they concluded that Theia was a very large body, comparable in size to the proto-Earth. This means that the impact of Theia on proto-Earth was likely a “merger” of similarly sized bodies.

When this happens, the hydrogen can chemically dissolve into the molten rock, the way oxygen and carbon dioxide dissolve into our water oceans, a process called “ingassing.”

Recent studies have shown that this ingassing happened with proto-Earth, but it didn't change the D/H ratio inside proto-Earth that to the extremes seen in the lunar samples.

“That's because there was already a lot of hydrogen in the proto-Earth with high D/H, accreted in the form of water or clay minerals in the material that built up the Earth,” Desch explained. “So whatever hydrogen proto-Earth ingassed, it was mixed with other hydrogen and didn't result in D/H as low as in those lunar samples.”

What this helps explain is that the light hydrogen must have been in Theia. It also helps define Theia as dry (so that the solar nebula hydrogen didn't mix with other hydrogen) and big (because otherwise it wouldn't accrete a thick atmosphere of nebula gas that could then dissolve into the magma ocean).

“What's significant about this finding, beyond just understanding the moon, is how many implications it has for how planets form,” Desch said. “Our research strongly suggests that the early solar system made a handful of large, Mars- to almost Earth-mass planetary embryos that merged into planets, rather than hundreds of moon-sized embryos.

“It strongly suggests as well that much of the material in the inner solar system was bone-dry, with no water in it.”

The researchers hope that these findings spur new thinking about planet formation. Their constraints on Theia suggest the building blocks of Earth got much larger, much faster, than previously thought. New measurements of D/H in lunar and even terrestrial samples should be made to see if they fit into this new context for planet formation and hydrogen in the moon. Desch and Robinson hope to follow up on this to learn more about how the moon formed and about the origins of Earth’s water.