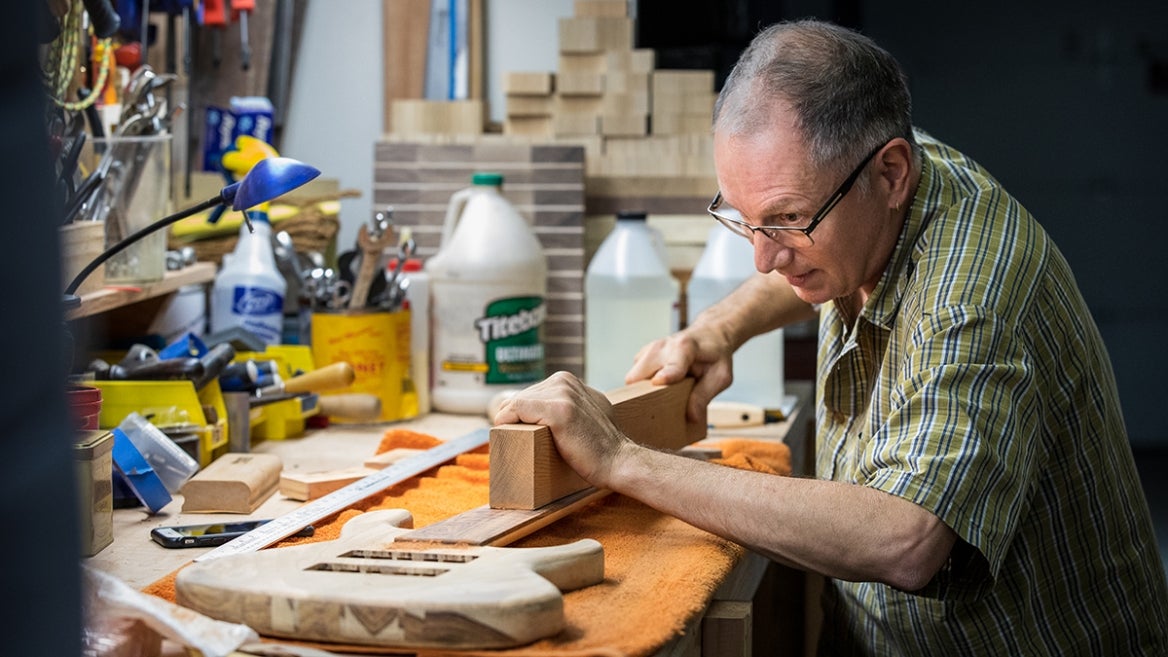 Feeling the vibrations of creation

But his relationship with pulsing waves goes beyond wielding the biggest ax on the stage.

Garnero is a seismologist at Arizona State University. He studies earthquakes and how waves move through Earth and other planets.

And he applies seismology to building guitars.

He may be the only one of his kind in the world.

Garnero has been building guitars for years, but he hasn’t yet found his grail. What he seeks through constant reiterations in his garage woodshop is taking an electric bass to the other side, on the inside, until it comes alive. He knows what it will feel like when he creates it.

“There’s a feeling you get in your hands with the instrument. It’s ‘Let’s go!’” he said. “This thing vibrates with that crisp energy!”

He wants to mimic the sensation of driving an exotic car. A friend once took him for a ride in a Ferrari. That instant sensation of power that runs from your feet up through your sternum when you step on the gas in a car like that, when the 12 cylinders in the rear engine roar like angry beasts — that’s what Garnero is going for in his quest for the perfect electric bass.

“The response is in your fingertips,” he said.

His bass guitars are hollow inside but filled with structures and channels and barriers, small pieces of wood meticulously designed and shaped and placed to direct and sculpt sound waves.

As a professor in ASU's School of Earth and Space Exploration, Garnero researches structures in the deep interior of the planet. His imaging work includes two continental-size anomalies ("blobs") in the deepest mantle rock.

He is trying to understand structures inside the planet and the moon that relate to dynamical motions and evolution of the body itself, and how such things relate to surface observables, like plate tectonics and volcanism.

He has been evolving his guitars for years. His latest iteration is an electric bass. It’s hollow, with different strips of wood intricately set inside. Ribs like ceiling joists run all the way up into the hollow neck, creating channels. Each channel has its own natural frequency. Each cavity has its own natural pitch. When Garnero plays, he can feel the vibrations against his body.

“It changes the way you play,” he said. “The chamber helps the instrument to lose weight and to vibrate more when you play it.”

Earth's surface moves around like pieces of a puzzle. The hot mantle slowly churns. In some places tectonic plates go into the planet and make huge earthquakes. Those tectonic plates diving in can act as a wave guide, where seismic energy goes through the rock structure. It’ll go around it, but it’ll also focus and travel through. Sometimes, if there’s a channel, waves will go into that channel and focus their energy there.

“That’s when I started to get the idea,” Garnero said. “Can we cause a sonic vibration that kind of amplifies? In the neck the channel starts shallow and gets bigger as you go towards the body. … All this energy here goes into the neck and amplifies as it comes down because the space is getting smaller. You’re forcing a vibration into a tinier space. That actually is just like tsunamis. Below the ocean an earthquake happens and it pushes the water up, maybe only a few feet. That bubble of water falls back down and travels out. As you go towards the shore, the water depth is decreasing, but the energy is the same, so the wave height grows.”

Tsunami waves that hit 100 feet on the shore might have started as 6 feet high 100 kilometers off shore. The same energy is being forced into a tinier space. (And Thrashing Tsunamis of Tsound could make a good band name.)

So how did music and seismology converge in Garnero's life?

He never thought he’d make instruments, but he has been into music since he was 12. His mother played guitar in a church group, and his best friend since he was 6 was a guitar prodigy. His buddy pushed him into playing and taught him some bass lines on an acoustic guitar. When he was 15, he got his first bass guitar from Montgomery Ward. (His parents paid for half, and Garnero earned the other half mowing lawns).

The duo formed a garage band that played the same three songs over and over: "Johnny B. Goode," "Rock and Roll, Hoochie Koo," and an original composition called "Euclid Jam," named after their street: Euclid. (Garnero had no idea who the mathematician Euclid was back then. "Later in my science life I would come to like and adore (Euclid), an amazing person who came up with amazing theories even after he had gone blind.”)

During high school and for four years afterward Garnero played in pop bands in Monterey, California. Then he went to college. He was an undecided major at Berkeley; someone told him to check out geology. He majored in it, and liked it, but just not memorizing rock names. He took an elective on the geophysics of earthquakes. He liked the math, and earthquakes were cool.

“It was just kind of curiosity,” he said. He had a professor who loved seismic data. That hooked Garnero.

“How do you pick apart those wiggles? What happened to them traveling through the medium? It was more like I was interested in the process.”

Becoming a seismologist was possible, but he never thought he’d make an instrument. When he arrived at ASU, he had a bass repaired at the Roberto Venn School of Luthiery in Phoenix. An instructor told Garnero he should start working on guitars and sold him a book.

He began by fiddling around with his own instruments; then he got the guts to try a few things. The next step was always an impossible one. “I’ll just destroy the instrument,” he worried. Then he’d talk himself into trying it.

“And I’d destroy it.” It was usually a dumb mistake, and he thought he could pull it off the next time if he didn’t make that same dumb mistake.

“So now I’m making instruments, and I’m making mistakes, but they’re informing me for the next ones,” Garnero said.

“Can we cause a sonic vibration that kind of amplifies? … All this energy here goes into the (guitar's) neck and amplifies as it comes down because the space is getting smaller. You’re forcing a vibration into a tinier space. That actually is just like tsunamis.”
— Ed Garnero, ASU professor, musician and guitar maker

He spends one night a week working as a monitor in the ASU woodshop and other nights in his garage shop, a space jammed with pieces of wood: acacia slabs, mahogany door panels, cedar planks.

“I’m always sleuthing Craigslist free for stuff.” He squirts water on a cedar plank. “There’s a lot of flame down there that will come out.”

Making guitars from scratch for about eight years, sometimes he finds himself lying awake at night thinking about what to do with different pieces of wood: “I love wood so much I’m trying to use wood more and more.”

If he wasn’t busy being a university professor and research scientist, he could build a guitar from scratch in two months.

“We’re thinking of working forward until in five years we have our own version of guitars that are channeled and look like the kind of things people spend a lot of money on, like a Stratocaster, a Les Paul, a Telecaster, whatever — these common rock-star hero lineage instruments — and make our own versions of that stuff with our own design tweaks, but chambering them.”

Someday some rock god could be in an arena, hoisting his Garnero ax to the roar of thousands.

“An arena — that would be awesome. I hope so. I hope I can make something that somebody is excited to make music on because of the way it feels. I’m less attached to my name in that way.”

He has made a lot of bass guitars for people and enjoys the process of creating something someone loves.

He likes the way his guitars feel when he plays them.

Top photo: Professor Ed Garnero works in his woodshop at his Tempe home. The ASU seismologist makes guitars and other projects when he's not studying the interior of the planet. Photo by Charlie Leight/ASU Now