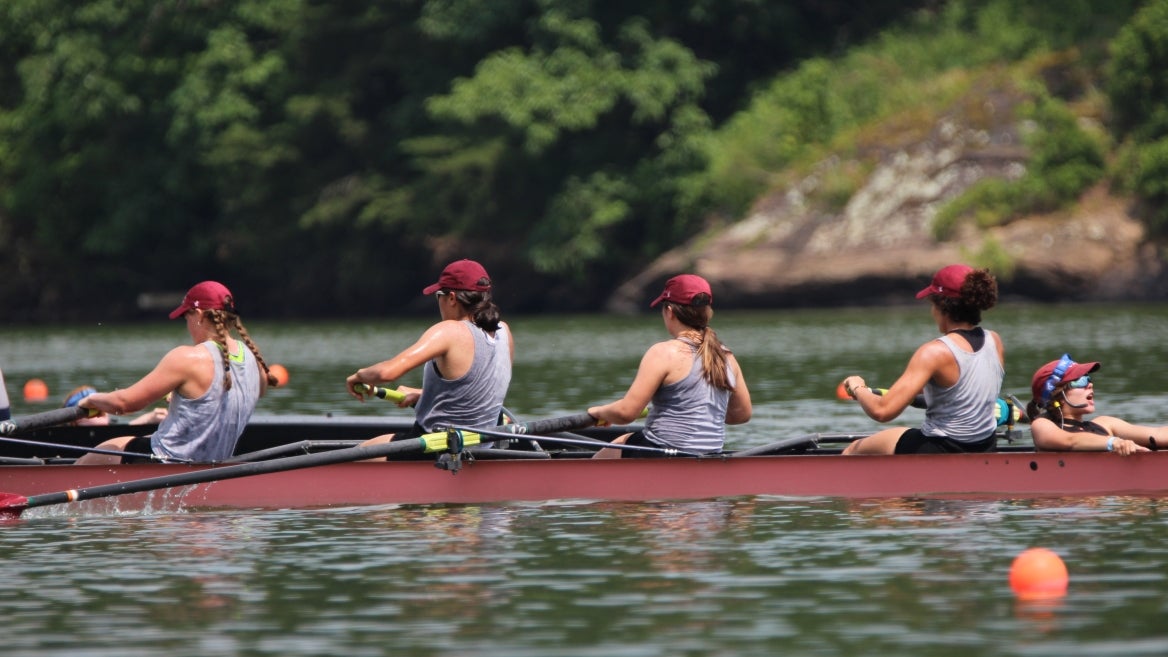 From black holes to row boats: Astrophysics major shares experience as a student-athlete

Some students throw themselves headfirst into their studies. Others focus their energies on extracurriculars and sports.

Katie Cranmer does both.

To say she’s busy is an understatement –– Cranmer juggles life as a sophomore astrophysics major in The College of Liberal Arts and Sciences’ School of Earth and Space Exploration with being a coxswain on both Arizona State University's men's and women’s rowing teams.

“It's hard when you're balancing a sport, a bunch of difficult classes and everything to stay on top of it,” she said. “But it definitely helps that you have a lot of resources here. I've had some really good professors who I've talked to in their office hours and who have helped me out a lot.”

When she’s not hitting the books, Cranmer is hitting the lake — Tempe Town Lake, to be precise.

The rowing team practices on the lake six days a week for two hours a day, and five of those practices are at 5:15 a.m.

Cranmer’s role as a coxswain on the team involves steering the boat and shouting technical directions, often acting as the motivational center for the team.

Cranmer said her interest in rowing developed while she was a high school student in Connecticut.

“I started rowing as a freshman in high school,” she said. “I was lucky enough to go to a public high school that had a rowing team.”

Now, even with a demanding practice schedule, Cranmer says she’s found her double life as a student-athlete to be very rewarding.

“It keeps you focused more because you always have something going on, and physically and mentally you're engaged in different ways than you would be as just a student or just an athlete,” she said. “The relationships you form with your teammates, especially in a sport like rowing where everyone has to be on board in order to do well, is really an important part of your life. I don't know where I would be without rowing.”

Despite her course load, Cranmer said she’s not the only one on her team with a full academic schedule.

“I have a teammate who brings flashcards in the boat sometimes,” she said. “So when we're doing a drill and he's sitting out, he's reading the flashcards. We have lots of people in very difficult majors, so there are a lot of high-achieving people (on the team) who are always studying and rowing.”

In addition to her love for athletics, Cranmer’s other passion is astrophysics.

Cranmer said her parents, who are both doctors, initially wanted her to become a doctor, too.

But it was her father’s hobby for astrophysics and cosmology that helped guide Cranmer to her current major.

Last summer, she worked as an engineering student assistant for the Kitt Peak National Observatory.

Her work at the observatory began with studying what other people were doing and helping wherever she could.

"And then I started debugging, which doesn’t mean I went through lines of code to find typos. It meant I was literally sweeping the lady bugs out of the garage while they were doing some delicate testing. And by the end of the summer I was doing some of that delicate testing myself.”

Cranmer said her work at the observatory was primarily on the Dark Energy Spectroscopic Instrument, or DESI project.

“It's a device attached to the male telescope at Kitt Peak in Tucson, which collects the light that is either absorbed or emitted from a galaxy and it will compare it to what that light should be,” she said.

The DESI project will gather the light for about 35 million galaxies over a period of five years, according to Cranmer, in order to measure the expansion of the universe.

While completing the prerequisites for her major, Cranmer said she has had the opportunity to branch out and explore other subject matter, like her Roman literature class in the School of International Letters and Cultures.

In part because of her interest in Roman literature, Cranmer is considering adding a second major in classics.

“I've definitely been exposed to a lot of different subjects, even in a specific major like astrophysics, through the general education requirements,” she said. “And I've met a lot of people in a lot of different disciplines and learned a lot from them, too.”