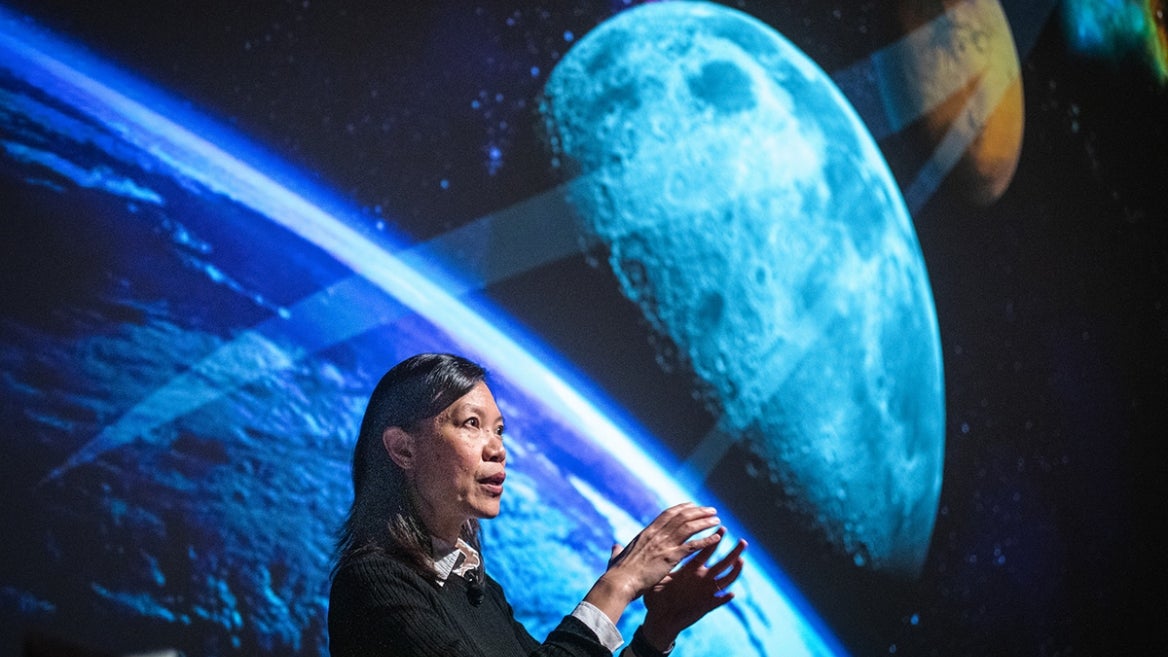 Putting boots on Mars — and beyond

Lots of things have to be invented and perfected before people explore deep space: suits, radiation protection, habitats, communications.

Darlene Lim is on it.

A NASA geobiologist, Lim spearheads the space agency’s BASALT project, which designs and develops elements of future missions that could put humans on Mars. She spoke Wednesday afternoon at Arizona State University’s School of Earth and Space Exploration.

Her topic? “Designing and Developing for Human Scientific Exploration of the Moon, Deep Space, and Mars.”

Lim’s work focuses on seamlessly blending field science research with developing human tools, technologies and concepts that will directly inform NASA missions. She has spent more than 20 years leading field research programs around the world and has conducted research in both the Arctic and Antarctic and in various underwater environments where she has spent hours piloting submersibles as a scientist and explorer.

“I think the world is about to change before you very quickly,” she said.

Walking around on Mars (extra-vehicular activities, in NASA parlance) will be how science is conducted on the Red Planet, by both humans and robots, Lim said.

Working there will involve a new operational paradigm. Currently it takes 1 millisecond to communicate with the International Space Station one way. Want to talk to the moon? 1.3 seconds one way. Mars? Three to 22 minutes, one way.

She outlined a basic Mars operation: There will be an Earthbound mission control team, a smaller but similar team on the Red Planet, people in one or more rovers, and finally astronauts on foot, all in communication with each other.

How will this affect science and discovery? “What are all the little devils in the details?” Lim asked.

Lim’s work revolves around theory, not necessarily engineering final solutions, which she acknowledges will likely come in the future.

There are research analogs to deep space exploration, such as studying extreme environments. There are also operational analogs, where concepts of operations and capabilities for future missions are explored. Lim has led research in Mars-like environments on Earth, in places like Kilauea, Hawaii, and the Craters of the Moon monument and preserve in Idaho.

“If 1% (of my research) affects the future, I will die a happy woman,” she said.

And the payoff? “If the humans at the other end can be themselves and convey that, we’ll be better off," she said.

Top photo: Darlene Lim, a geobiologist based at the NASA Ames Research Center, talks about designing and developing Earth-based missions to foster methods for successful human exploration of the moon, Mars and deep space. She delivered the final SESE Colloquium Fall 2019 lecture at the Marston Exploration Theater, on Dec. 4, 2019. Photo by Charlie Leight/ASU Now