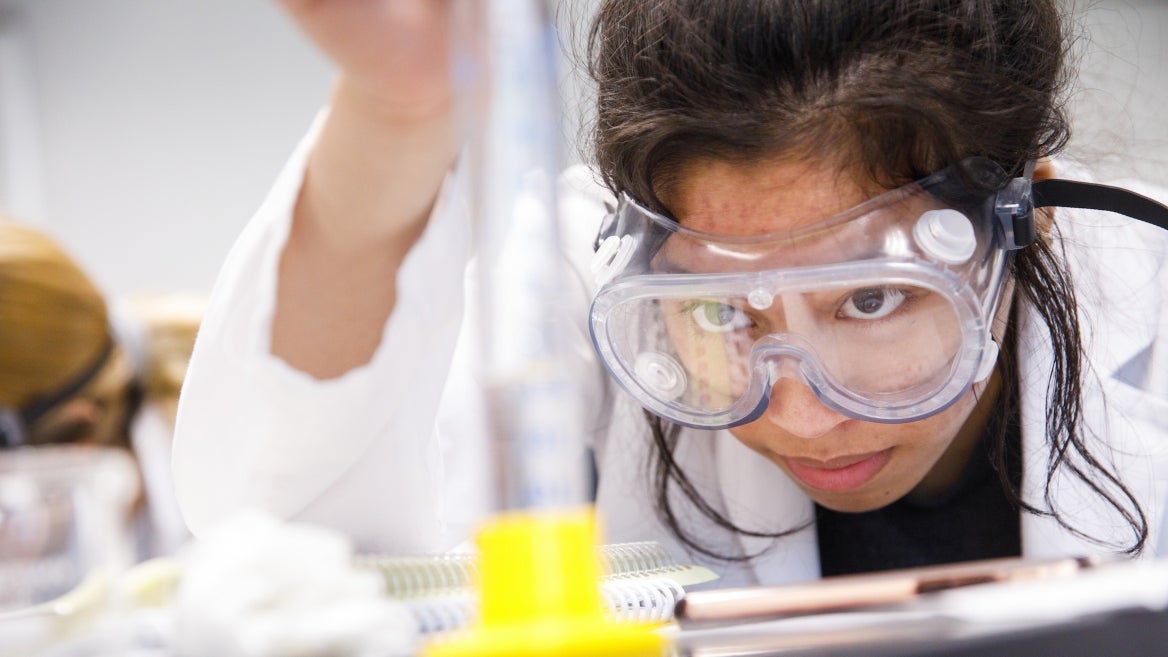 Arizona State University continues its ascent in the national research rankings, rising to No. 7 in total research expenditures for universities without a medical school, according to the latest National Science Foundation Higher Education Research and Development rankings.

ASU receives research funding through several avenues, including businesses, nonprofits and philanthropy, as well as federal, state and local grants.

“These rankings are a further testament to the innovative spirit that permeates ASU in all disciplines, and across all of our faculty, who have a collective goal and commitment to solving global grand challenges for society,” said Sethuraman "Panch" Panchanathan, executive vice president of ASU’s Knowledge Enterprise and ASU’s chief research and innovation officer. “This combination of individual excellence and collective spirit of solving problems is a powerful recipe for success. The evidence of that success is reflective in what we are seeing in the rise in our national rankings.”

ASU has experienced explosive growth in research. In 2002, for example, it reported $123 million in expenditures. Today, it is at $617.7 million.

With each year’s gain in expenditures, the university has risen in the ranks of specific categories. In the fiscal year 2018 report, for example:

• ASU is ranked No. 1 in geological and earth sciences, ahead of University of Michigan and MIT.

• In anthropology, ASU maintained its No. 1 spot, ahead of Stanford and Harvard.

• In transdisciplinary, multidisciplinary and other sciences, ASU moved up to No. 2, ahead of Johns Hopkins and Ohio State University.

• In political science and government, ASU is ranked fifth, ahead of Duke and the University of Arizona.

• In humanities, ASU is ranked fifth, ahead of Yale and the University of Wisconsin.

• In social sciences, ASU is ranked No. 4, ahead of University of Pennsylvania and UCLA.

• In electrical, electronic and communications engineering, ASU moved up to No. 8, ahead of MIT and Stanford.

Current research projects at ASU exemplify the importance of research to the good of society and to the advancement of worldwide economies. But it also plays a crucial role in student education.

“One of the most enriching experiences a student can have at ASU is to be fully engaged on the front lines of cutting-edge research through their work with our professors,” Panchanathan explained. “It is through these experiences that students not only learn about science but also about the real world. It helps them solve problems and allows them to apply their talents to the greater societal good.”

Zachary Holman, an ASU associate professor of electrical engineering, has a penchant for breaking solar efficiency records. In 2017, he and his team set a world record of 23.6% efficiency for a tandem solar cell stacked with perovskite and silicon. Last year, the team broke that record and achieved 25.4% efficiency.

Holman’s research explores alternative photovoltaic materials and tandem solar cells, which involves stacking a cell that converts visible light into energy and one that converts infrared light, enabling the technology to harvest a greater portion of the solar spectrum and improve efficiency.

Holman believes his newest round of research will increase cell efficiency to 30%.

“We have to make sure that the increased efficiency balances the costs,” he said. “It must be affordable in addition to being efficient.”

In addition to having led the NSF Research Experiences for Undergraduates solar power summer program the past four years at ASU, Holman routinely hosts undergrads as research assistants in his lab — last year’s undergrads, who were each leading their own project, are now succeeding in industry internships or their careers.

Monitoring the pulse of Earth

ASU geologist Christy Till, a professor in ASU’s School of Earth and Space Exploration, runs the Experimental Petrology and Igneous processes Center, or EPIC lab. Her work focuses on determining the timescales and triggers for volcanic eruptions at active volcanoes — leading to a fledgling method of volcano forecasting. Her group is also growing minerals and magma in high-pressure and high-temperature laboratory experiments.

“We are trying to understand what causes these different eruption behaviors to better protect the people who live close to volcanoes and better forecast future volcanic behavior,” said Till, who is especially proud of her students’ participation in the research.

“Without our federal funding, ASU students would not have the opportunity to be conducting cutting-edge research that helps inform our understanding of volcanic hazards,” she explained. “Because of our grants, I have had the opportunity to conduct research with ASU students at volcanoes including Yellowstone, Mount Shasta and Medicine Lake in the U.S., as well as other important volcanoes around the world, such as Mount Fuji in Japan and Laguna del Maule in Chile.”

In their recent studies of the Cascade Mountain range, which includes Mount St. Helens, her team proposed a new reason for differences in eruption behavior, looking at the big picture told by all the volcanoes' eruptions together to complement the myriad of research at individual volcanoes. The team’s first discovery was that different amounts of magma are being generated beneath the volcanoes within the Cascades volcanic arc. They also learned that the storage of these different amounts of magma in the Earth’s crust leads to different properties of the crust, like the speed at which earthquake waves travel through them and how hot the crust is.

Nancy Grimm, a Regents Professor in the School of Life Sciences at ASU, studies how humans interact with the Earth and how we change its ecosystems. Her research focuses on stream and urban ecosystems.

For more than three decades, Grimm’s desert stream research has focused on the impacts of and resilience to climate disturbances, such as flooding or drying. Both alter the ecosystems’ structure and function.

In a long-term study of Sycamore Creek in Arizona, Grimm, along with her students and colleagues, is looking at how hydrologic regimes influence ecosystem structure and function and the transition between gravel-bed and wetland ecosystems states. Her long-term urban research program, affiliated with the Central Arizona–Phoenix Long-Term Ecological Research Program since 1997, addresses problems of urban sustainability and resilience given the effects of climate change on water, infrastructure and ecosystem processes and services.

“Our research rankings are truly reflective of the widespread, multidisciplinary expertise we have fostered here at ASU,” Panchanathan said. “I am grateful to our students, faculty and staff for driving toward ever higher levels of research intensity and excellence.”