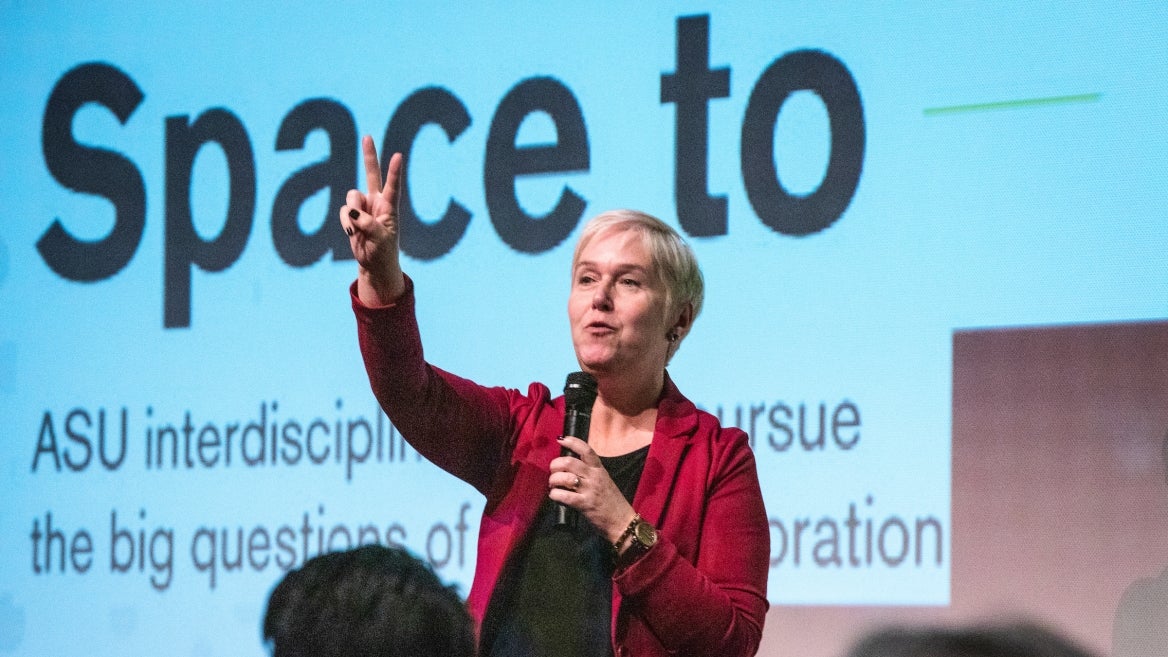 Reaching for the stars

Millions of people around the world are working on making the push into space. Blue Origin is testing landers in the west Texas plains. SpaceX engineers are putting in long hours at its headquarters in the old Hughes Aircraft plants in Los Angeles. And universities are researching, experimenting and testing in every field from planetary geology to astrobiology to astronomy, plus running their own missions with NASA and foreign space agencies.

Now Arizona State University’s School of Earth and Space Exploration has unveiled its efforts to solve some of the millions of problems that will have to be solved as mankind moves off Earth and colonizes the solar system.

The Interplanetary Initiative kicked off more than two years ago. The project brings together faculty from across the university, from the arts and sciences to the humanities, to brainstorm on significant problems and offer solutions.

“You’re going to see the results of research tonight,” Lindy Elkins-Tanton, co-chair of the effort along with university President Michael Crow, said Thursday night at a Space to Thrive public panel on the Tempe campus. “It’s in our genes to explore. That’s what we’re doing.”

WATCH: The Space to Thrive panel's recorded livestream on LinkedIn

In his remarks, Crow asked the audience: Are we a single-planet species?

“Absolutely not,” he said. “Our job is to build into our species as much adaptability as possible.”

A series of presenters gave flash talks about their projects during Thursday's panel.

Lance Gharavi, associate professor and assistant director/artistic director of theater in the School of Film, Dance and Theatre, introduced “Port of Mars.”

“Port of Mars” is a card game created to see how cooperation might shake out in an off-world colony. Players are members of an early Martian settlement charged with working together to sustain the welfare of the community. Player actions are tracked and behavior analyzed. Researchers examine that data, looking for what behaviors, structures and systems worked, and what failed. Each instance of gameplay is a simulation, a modeling exercise for future space missions.

“How do we make sure they won’t tear each other apart?” asked Gharavi, raising the spectre of a "Lord of the Flies" scenario in outer space. “How do we best sustain healthy human communities in space?

“It’s a social science experiment disguised as a game,” he said, a way to engage the public in science with a fun game that rehearses the future.

Data will be collected from sessions and eventually be provided to organizations like NASA and Blue Origin. In spring 2020 a video game version will launch as well as a tournament Gharavi dubbed “March Mars Madness.”

Some of the other Interplanetary Initiative projects

Space exploration is going to require flexible, adaptive and quick thinking. As the adage goes, “We don’t know what we don’t know.” Evgenya Shkolnik, a professor of astrophysics, introduced Exploration Learning, a set of education techniques that engages students in critical thinking, problem solving and taking personal agency over their learning.

Near Earth orbit is jammed with satellites watching everything from the stars above to license plates below. But there’s a dearth of professionals qualified to operate satellites. To remedy that, Kaylee Poetsch, a technical training developer at Qwaltec, announced a partnership with ASU to create a Satellite Operations Course. The world’s first online satellite command and control certificate, the designation will be an insurance policy to employers that grads will be able to hit the ground running.

When techs pack supply loads for the International Space Station, the last things to go in are vegetables and produce. When the astronauts open the load, the first thing to hit them are smells of the planet below.

His team has constructed virtual reality, augmented reality and real engines and spaces simulating exploration on Mars (with real NASA data) — and a mobile Martian habitat.

“We look forward to you joining us on the Red Planet,” LiKamWa said.

Geoffrey Clark, a PhD student in Hani Ben Amor’s Interactive Robotics Lab, introduced an exoskeleton prototype that has applications for both astronauts and people on Earth.

On long duration missions, astronauts will have to deal with a number of adverse physical effects, like losing bone and muscle mass. When they return to Earth, they will need help moving around until they recover. The exoskeletons built in the lab can be used to maintain strength in space and regain it on Earth.