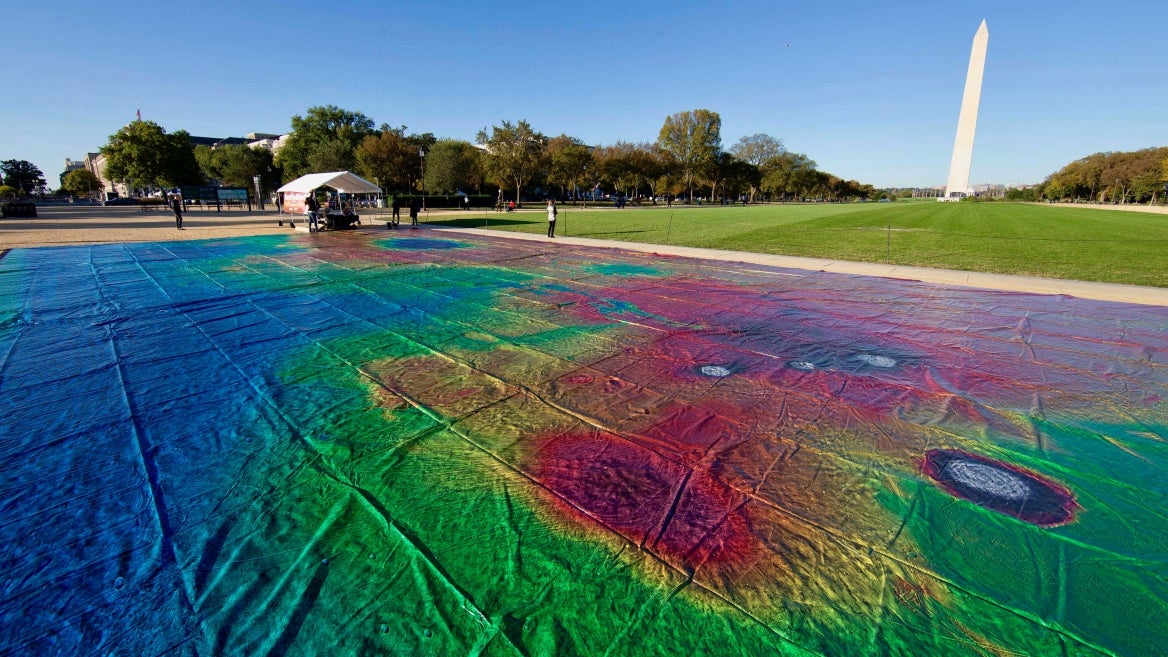 Bringing Mars to the National Mall

When Lillian Keyes visited Washington, D.C., from Poughkeepsie, New York, on Friday, she didn’t know she would have the opportunity to visit Mars as well. Keyes found the Red Planet “eye-catching.”

“Everyone was very friendly,” she added.

On Friday and Saturday, strollers and tourists on the National Mall in Washington could look at the world’s largest map of the surface of Mars. The roughly basketball-court-size map was put on display by representatives from Arizona State University’s School of Earth and Space Exploration.

“We wanted to show people the incredible detail of the map,” said Jonathon Hill, Mars scientist from ASU and project lead for the Mars map. “We wanted to make the map a more physical experience so you could actually walk around and really look down and see the detail at your feet.”

Mission accomplished, according to the young Kellerman sisters, visiting with their parent, Terry Ferguson from Grass Valley, California.

“It’s cool. It’s amazing how many pictures it took to make it,” said Ella Kellerman.

Her sister Clara was impressed by “how many things hit it and how they make that big of a dent.” Planetary science may be in her future.

The whole family was wowed by the map. “When I asked what the colors were, to learn that that was about to see the different range in height and everything on the planet is, that’s really amazing,” Ferguson said.

The map is a combination of 24,000 individual images taken by the Thermal Emission Imaging System camera on NASA’s Mars Odyssey orbiter. The various colors of the map indicated the elevation of different geographical landmarks of the planet. Hill is a PhD student from SESE and mission planner for the camera.

The Mars Odyssey was launched in 2001 and took each image over the course of 16 years. It took another four years for Hill and his team to piece it together into a seamless map. Hill made it clear that there were several challenges with a feat this large.

“We had to write software to combine all the images seamlessly, and then just the logistics of printing something this large was difficult,” he said.

All the work was worth it, according to Lucy Forman, an Australian tourist from Perth.

“It’s really cool, like, it’s insane!” she said. “How would you even print something like this? It’s nuts, and it’s really cool you can go around pick out individual craters and kind of think about how each of those different craters might have formed and what kind of impact would have happened to cause those craters, which is really cool.” Visitors walk, sit and take selfies on the Mars map Friday at the National Mall in Washington, D.C.

The map has already been a feature at a variety of events in Arizona, Colorado, California and Texas. Hill hopes this project can grow and that more people can learn from what the map has to offer and how it can help others learn about planetary sciences more broadly.

“Next, we’re actually looking into printing additional maps: one of the Earth and one of the moon all with the same color scale and then displaying them together so that people can start doing what planetary scientists do and start comparing and contrasting them,” he said.

Hill expressed that this hopefully will not be the last that the Earth has to see of Mars.

“People really want to see this, and they’re really excited by it,” Hill said, “and they don’t even know they’re excited about it until they know it exists.”

The event was sponsored by the American Geophysical Union in honor of the organization’s 100th anniversary.

Top photo: A vinyl map of Mars, roughly 95 by 50 feet, waits to greet visitors on the National Mall on Friday.