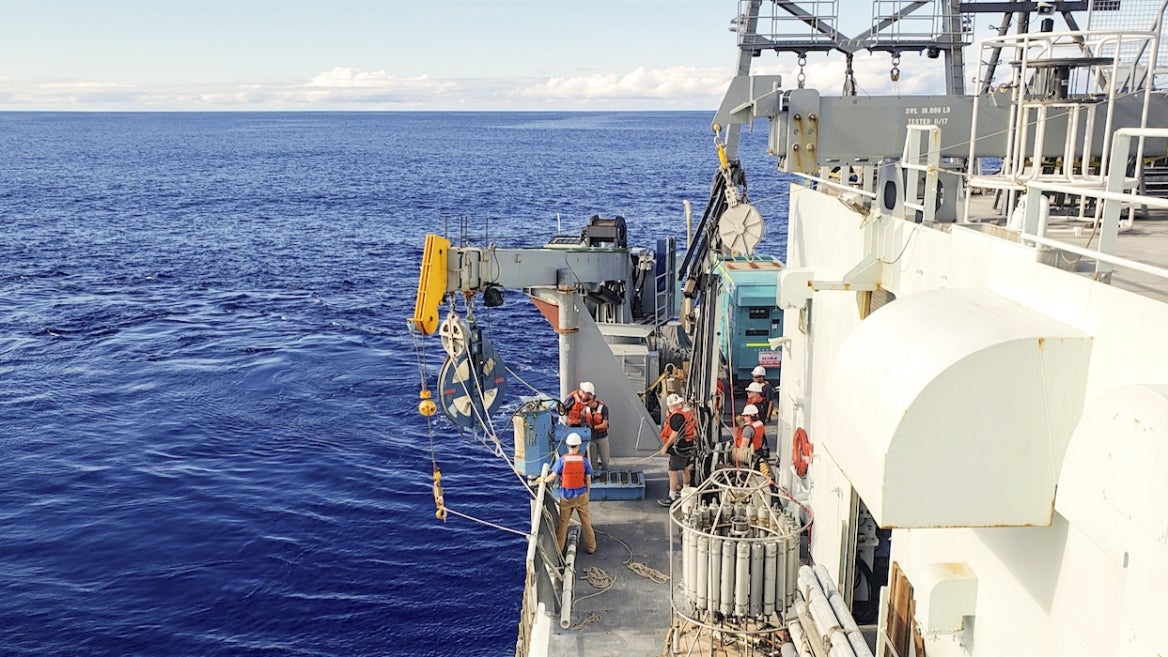 Sediment samples, collected from the ocean floor, have unlocked scientific mysteries around the world. By analyzing these sediment cores, scientists have been able to follow seasonal cycles, glacial movement and even meteorite fallouts over thousands of years. These data help interpret both the history and future of Earth’s climate.

The Southern Ocean is one of the most remote places on Earth. Until very recently, scientists rarely had access to sediments from these oceans and most of the available data are more than 40 years old.

Hartnett’s objective in joining the research cruise was to obtain between 30 and 50 cores of sediment. At sea, Hartnett was responsible for sampling, analyzing and storing the cores.

Those samples are now being analyzed in Hartnett’s lab at ASU. The research cruise is also the subject of an upcoming New Discoveries Lecture featuring Hartnett on Oct. 3 at 7:30 p.m. on the Tempe campus.

Samples of the past

Hartnett refers to the cores collected from the CROCCA-2S cruise as “samples of the past,” as they hold clues to the history of Earth’s climate over time and can tell us when the ocean was hot or cold and what the chemical composition of the ocean floors were over time.

Every year, many tons of dead plankton and other marine organisms, dust blown from far-off lands and river sediments settle on the ocean floor on top of materials from previous years. They record a history, similar to the rings of a tree.

Some of the marine organisms deposited have shells made of calcium carbonate, which holds a record of the chemistry of the ocean and atmosphere.

While these samples hold a treasure trove of data, collecting them is no easy task. The CROCCA-2S cruise departed last November from Perth, Australia, and sailed west into the Southern Indian Ocean for nine full days, to reach one of the deepest areas of the Indian Ocean.

After mapping the ocean floor for the right locations, one of the instruments the team used to collect samples was a piston corer. The collection process involves a cylindrical piston system, which slides down a core barrel with the help of weights and acts to drive the corer deep into the sediment.

The cores used on this cruise were about 30 feet long, and the team collected more than 440 feet of cores during the cruise. Back on the ship, the team scanned the core samples, split them, described them, then stored the cores for analysis after the cruise.

“The range of sediment types was amazing and beautiful,” said Hartnett.

To learn more about Hartnett’s research and this cruise, join the School of Earth and Space Exploration for the New Discoveries Lecture "Cruising and Coring the Southern Ocean in Search of Past Climates" on Thursday, Oct. 3, at 7:30 p.m. At this lecture, she will give listeners a look at life aboard a research ship exploring the Indian Ocean and speak about how cores are collected from the ocean depths and what they can tell us about the history and future of Earth’s climate.