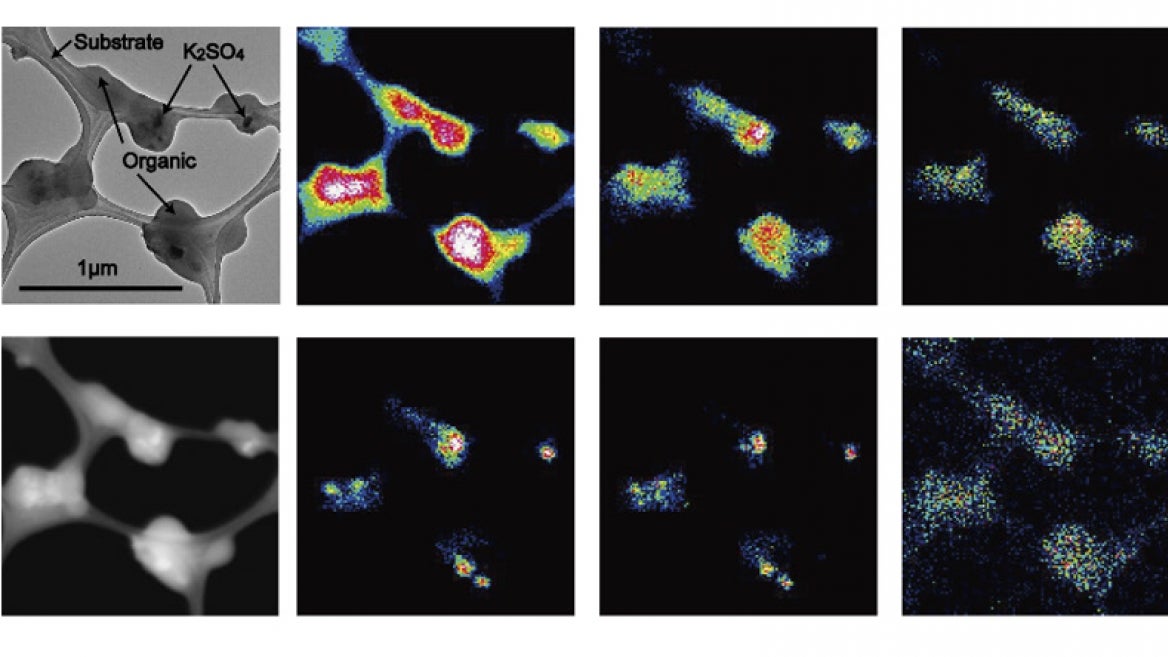 Wildfires are widespread across the globe. They occur in places wherever plants are abundant — such as the raging fires currently burning in the Brazilian Amazon. Such biomass burning (BB) can be an environmental calamity.

The smoke from BB events produces large amounts of aerosol particles and gases. These emissions can cause major problems for visibility and health, as well as for local and global climate.

BB emissions are expected to increase in the future as a result of climate change. Tarballs, which are microscopic organic BB particles, are estimated to contribute up to 30% of BB aerosol mass. Because tarballs are a dominant, light-absorbing type of aerosol particle in BB smoke, understanding their influence on climate is crucial. But details of how they form and influence climate change have been unclear.

Senior researcher Kouji Adachi, currently working at the Meteorological Research Institute in Tsukuba, Japan, was a postdoctoral research associate from 2005 until 2011 with Professor Peter Buseck of Arizona State University’s School of Molecular Sciences and School of Earth and Space Exploration.

Their work attracted the attention of colleagues from the Department of Energy’s Brookhaven National Lab in Upton, New York. Principal investigators, Arthur Sedlacek III and Lawrence Kleinman, with support from the Atmospheric Sciences Program, were planning the Biomass Burning Operational Period (BBOP) field campaign, in which an instrumented airplane would measure rapid chemical changes in wildfire smoke. Kouji Adachi and Peter Buseck at the American Geophysical Union Conference in New Orleans in December 2017.

Sedlacek and Kleinman approached Buseck about participating in BBOP, as the sampling strategy provided an ideal laboratory in the sky to study tarball formation.

The results, published online Thursday, are in a Proceedings of the National Academy of Sciences paper titled “Spherical tarball particles form through rapid chemical and physical changes of organic matter in biomass-burning smoke.”

The team’s observations show that tarballs form through a combination of chemical and physical changes of organic aerosols formed within the first hours following smoke production.

“I’m so pleased that tarballs, the subject of this paper, were first reported in 2003 papers in which an ASU chemistry graduate student, Li Jia, and postdoctoral research associate, Mihaly Posfai, were major contributors; thus the School of Molecular Sciences and the School of Earth and Space Exploration had an important role,” said Buseck.

Buseck, an ASU Regents Professor, also is being awarded the 2019 Roebling Medal this month, the highest award of the Mineralogical Society of America for outstanding original research in mineralogy.

“This study of tarball particles and the possible effects on climate change further shows the breadth and diversity of Buseck’s research,” said School of Earth and Space Exploration Director Meenakshi Wadhwa. “From solid-state geochemistry and mineralogy, to atmospheric geochemistry, to cosmochemistry, he continually proves to be a pioneer in his field.”

“Peter Buseck and his group have developed the use of transmission electron microscopy to study minerals, meteorites and aerosol particles in a uniquely interesting way,” said Professor Neal Woodbury, director of the School of Molecular Sciences. “His team’s current findings on tarball formation are a good example and will significantly improve assessments of biomass burning impacts on regional and global climate.”

Tarballs used in this study were collected from large wildfires sampled during the BBOP campaign in the summer of 2013 in the northwestern United States. Using a Gulfstream-1 research airplane, the team collected wildfire aerosol particles on repeated flights through smoke plumes. Shapes and compositions of more than 10,000 particles were measured using transmission electron microscopy, with detailed chemical analysis of tarballs performed using scanning transmission X-ray spectroscopy.

The analysis reveals that the fraction of aerosol particles that are tarballs increases with particle age. In addition, the tarball ratios of nitrogen and oxygen relative to potassium, and the particle roundness, also increase with particle age.

In summary, BB emissions including tarballs are expected to increase in coming decades as a result of climate change. This study reveals their formation process through chemical and microphysical analyses. The findings can be used to improve interpretation of BB smoke from satellite data and ground-based observations by considering tarball shape, viscosity and compositional changes during aging and to provide better estimates of their effects in climate models.