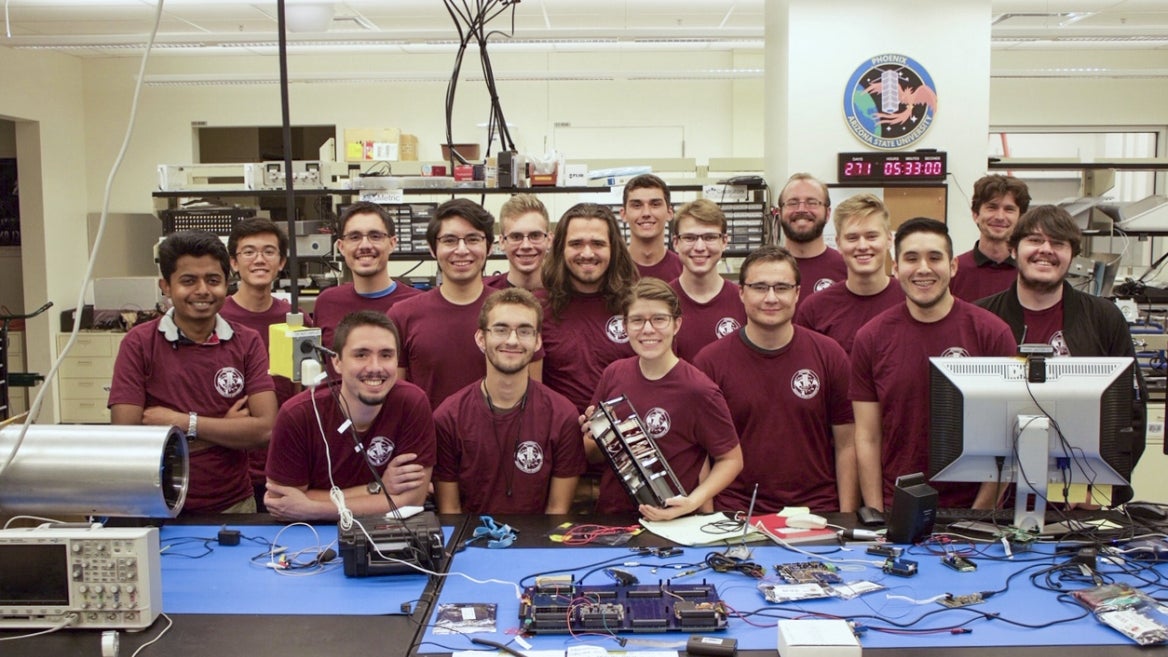 Editor's note: This story is being highlighted in ASU Now's year in review. Read more top stories from 2019.

Editor's note: The following update was added to this story on Nov. 4, following the successful launch of the Phoenix CubeSat.

On Saturday, Nov. 2 at 6:59 a.m. Arizona time, the Arizona State University-led Phoenix CubeSat was launched into space onboard the Antares II rocket from Wallops Flight Facility in Virginia as part of a Cygnus resupply mission to the International Space Station (ISS).

“Watching our Phoenix CubeSat launch meant more to me than I can ever possibly put into words," said Sarah Rogers, project manager for the Phoenix CubeSat and a graduate student in the Fulton Schools of Engineering. “And the fact that I got to share that experience with my team, who all mean so much to me, made the experience all the more special.”

The spacecraft safely arrived at ISS with its cargo on Monday, Nov 4. It will remain at the ISS until mid-January, when it will depart the station and deploy its CubeSats, including Phoenix.

“Then, we’ll get to see Phoenix come out of the Nanoracks deployer, deploy its antenna, and detumble,” said Rogers. “Once Phoenix has been deployed, the operations phase of the project will officially begin, and we will be able to collect data from the spacecraft while it is in orbit.”

During the first month or so, the team will perform checkout operations to monitor the health of the spacecraft and make sure they are comfortable commanding it from orbit before the science investigation officially begins. All operations will be conducted from ASU by the student team.

If all goes as planned, one day this October a spacecraft the size of jumbo loaf of bread will leave from Wallops, Virginia, packed aboard a cargo rocket bound for the International Space Station.

The spacecraft is a cubesat named Phoenix, and it is the creation of more than 100 science and engineering students, faculty and researchers at Arizona State University.

On Aug. 18, the Phoenix spacecraft was hand-delivered by the student team to Nanoracks, a launch integrator, at their facility in Houston. There it underwent final tests and preparations for its launch to the Space Station, planned for Oct. 21, 2019. After it arrives at the Space Station, Phoenix will be sent into low-Earth orbit sometime early next year.

The Phoenix spacecraft is designed for a two-year mission to take thermal images of several American cities (including its namesake, Phoenix) by day and by night.

The students who built Phoenix came from ASU's School of Earth and Space Exploration, the Ira A. Fulton Schools of Engineering, the School of Geographical Sciences & Urban Planning, the Herberger Institute of Design and the Arts and the Walter Cronkite School of Journalism and Mass Communication.

Students have made up by far the largest part of the Phoenix workforce. Ranging from those pursuing graduate degrees to first-year undergraduates, a total of 96 students are either working on or have contributed to the project, which began in April 2016. A number of students who contributed to the mission have already graduated from ASU, with several entering the national aerospace workforce.

"The Phoenix cubesat is a student-run project funded by NASA with an educational mission to train students in satellite development," said Judd Bowman, the mission's principal investigator and professor in the School of Earth and Space Exploration. "We have incorporated a student science team mentored by ASU professors to help provide scientific interpretation of the thermal images that the satellite will acquire from orbit."

As project head, Bowman is joined by Assistant Professor Daniel Jacobs, whose role is faculty mentor for the student workforce.

Said Jacobs, "NASA's goal was space workforce education, but they required a real target for the program — a technology demonstration or a scientifically worthwhile project."

The Phoenix spacecraft is a cubesat, 4 inches square by 12 inches long, a standard size and shape devised to make it easier for anyone to develop a small satellite. Four ultra-high frequency antennas sprout from one end like stiff whiskers, and solar panels wrap around two long sides to provide power. Sun and Earth sensors feed data to a commercial gyroscope unit to keep Phoenix aimed at the ground.

The heart of the spacecraft is its infrared imager, a commercial microbolometer from FLIR Technologies. This provides a resolution of 640x512 pixels. Fitted with a 100mm lens, it has a 5 degree by 6.2 degree field of view that covers an area 22 miles by 27 miles on the ground and provides a resolution up to 228 feet per pixel.

Phoenix will travel in a 92-minute orbit inclined 52 degrees to the equator at an altitude of about 250 miles, matching that of the Space Station. This means it passes over the entire contiguous United States, plus Hawaii, so it will see a given point within the geographic limits at many different times of day.

The initial plan is to concentrate the imaging on the city of Phoenix, both because it is the mission's hometown and because the ASU ground station provides easy radio communications to the satellite. Images and data will be downloaded at the School of Earth and Space Exploration and studied by the team, and new commands will be uplinked to the spacecraft, all from the Tempe campus.

An additional reason is that the Phoenix metro area has become one of the fastest growing regions in the United States, which ties directly into the scientific plans for the spacecraft.

As urban areas develop, changes occur in the landscape. In the case of metro Phoenix, its land coverage and land usage are both increasing faster than in most other cities. Typically, as land cover and land usage increase, the change from a rural or agricultural landscape to an urban metropolis yields warmer temperatures than in the surrounding areas. This phenomenon is called the urban heat island.

Seen by day or night with heat-sensitive eyes, cities loom as islands of warmth embedded in "seas" of cooler terrain. The Phoenix mission's primary scientific task is to study the heat radiation from the selected cities to determine their urban heat island effects.

The effect arises from a city's hardscape — its buildings, streets and pavements — which absorb heat from the sun during daytime, then cool off overnight at a slower rate than the natural landscape surrounding the city. Urban heat islands create negative effects on sustainability and the overall quality of life for people living in them.

Said Jacobs, "The goal is to image temperature variations across cities that include parks, residential neighborhoods and streets with a lot of shade trees — as well as unshaded industrial areas."

During its two-year mission, Phoenix will track changes in urban temperature patterns due to daily and seasonal effects.

In preparation for the mission, the students have charted how land is used in different parts of Phoenix and several other cities to identify local climate zones. These range from open grassland to compact, high rise urban areas. Students will use zone identifications to interpret their measurements from orbit and to investigate how the different uses of land within a city affect its heat island.

For many of the students, the Phoenix project stretched their ideas of what they could do. Starting with off-the-shelf hardware components (including electronics), linking them together within the tight confines available, and writing software to control them so as to gain scientifically usable data — the whole process was a challenging learning experience.

Students were accountable for meeting milestones and schedules, along with technical requirements determined by NASA and the launch provider. As Bowman said, "There aren’t many shortcuts you can take when you’re building a spacecraft."

Sarah Rogers joined the project as an undergraduate student and is now pursuing a master's degree in aerospace engineering in the Fulton Schools. She has been Phoenix project manager since the start.

"This was the first opportunity that students had to program and integrate complex spaceflight hardware," she said. "It required them to spend a lot of time with the hardware to get it all working properly."

The hardware came from different vendors and didn’t all work seamlessly together, she explained. The students on the team spent a lot of time and effort in really getting to know the hardware inside and out to ensure everything would work as a unified system.

Rogers said, "Programming our hardware was very different from using an Arduino microcontroller board, for example. With those, everything is open source, it's easy to use, and there's a wide community to call on for advice." (Arduino boards are popular with electronics hobbyists looking to build digital devices.)

As a result, she says, the team made mistakes, such as circuit boards getting fried by too-high voltages. "We had to learn how to handle the hardware safely, at the same time we were struggling to get everything to work together."

In the end however, Rogers said, "This experience led the student team to develop a professional lab environment that operated on standard space industry practices."

Not taught in classrooms

Yegor Zenkov, an undergraduate student in materials science in the Fulton Schools of Engineering, found that tasks which might look simple turned out difficult: "The biggest challenge for the payload team was trying to get raw, uncorrected data from the camera and calibrate it for space."

The student team was starting from scratch, he said. "At the beginning, none of the team had any experience with thermal cameras or microbolometers."

Every time they learned something new about the camera, they had to rewrite their test plans. And every test run involved several days of around-the-clock monitoring. The first set of tests in a vacuum chamber took months to set up — and then had to be redone.

Zenkov said, "This project forced me to learn and do research quickly, constantly stay nimble under pressure, and understand how to manage a team of volunteers."

Devon Bautista, now a graduate student in computer engineering at the Fulton Schools, started on the Phoenix project as an undergraduate. Involved in developing the flight software, he found that in working with multiple developers, communication is important and that it is sometimes difficult to reach a consensus on ideas.

"I learned how to translate technical concepts abstractly so other teams could understand them," he said. "In addition, this was my first large collaborative software project. Working with many developers from different backgrounds, I discovered which practices were good and effective, as well as which ones weren't."

Looking toward a career in systems engineering, Rogers found the project all-engaging. "My role in Phoenix has given me the opportunity to work on the science side as well as practically every technical area of the spacecraft."

She added, "I also gained valuable skills in interdisciplinary communication because Phoenix was created by individuals from different engineering and science backgrounds who didn't all use the same vocabulary."

Ultimately, Rogers said, "The skills I learned from Phoenix taught me both technical and personal lessons I could never get from a classroom setting."

For Bowman, the project is a new way for ASU to help the local community. "We see the Phoenix project as contributing to the trend of helping local governments and communities gain direct access to space to address their own needs."

Phoenix will be the first student cubesat launched by ASU, which prompts Bowman to say, "As the students reflect on how far we’ve come together — from knowing very little about satellite development to delivering an operational spacecraft — I think they should be quite proud of what they've achieved."