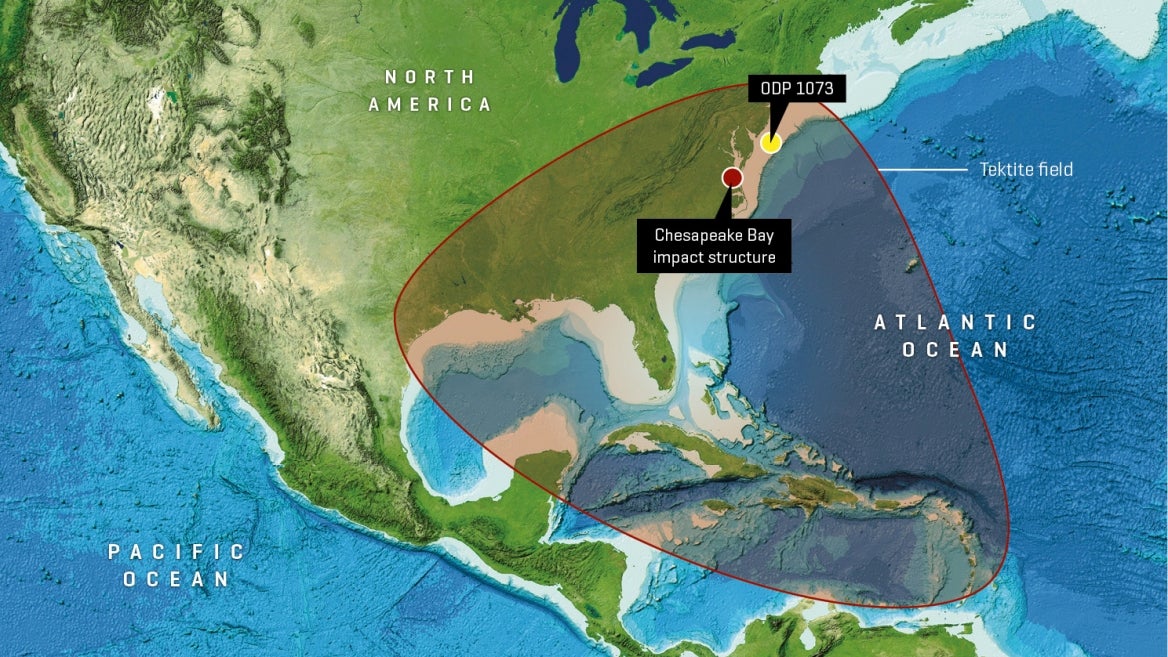 ASU researchers study largest impact crater in the US, buried for 35 million years

About 35 million years ago, an asteroid hit the ocean off the East Coast of North America. Its impact formed a 25-mile diameter crater that now lies buried beneath the Chesapeake Bay, an estuary in Virginia and Maryland. From this impact, the nearby area experienced fires, earthquakes, falling molten glass droplets, an air blast and a devastating tsunami.

While the resulting “Chesapeake Bay impact crater” is now completely buried, it was discovered in the early 1990s by scientific drilling. It now ranks as the largest known impact crater in the U.S., and the 15th largest on Earth.

When the asteroid hit, it also produced an impact ejecta layer, which includes tektites (natural glass formed from debris during meteorite impacts) and shocked zircon crystals which were thrown out of the impact area. Scientists refer to this layer as the “North American tektite strewn field," which covers a region of roughly 4 million square miles, about 10 times the size of Texas. Some ejecta landed on land while the rest immediately cooled on contact with seawater and then sank to the ocean floor.

A team of researchers, including Arizona State University School of Earth and Space Exploration scientist and lead author Marc Biren, along with co-authors Jo-Anne Wartho, Matthijs Van Soest and Kip Hodges, has obtained drilling samples from the Ocean Drilling Project site 1073 and dated them with the “uranium-thorium-helium technique” for the first time.

Their research was recently published in the international journal Meteoritics & Planetary Science.

“Determining accurate and precise ages of impact events is vital in our understanding of the Earth's history,” Biren said. “In recent years, for example, the scientific community has realized the importance of impact events on Earth’s geological and biological history, including the 65 million years old dinosaur mass extinction event that is linked to the large Chicxulub impact crater.”

The team studied zircon crystals in particular because they preserve evidence of shock metamorphism, which is caused by shock pressures and high temperatures associated with impact events. The dated crystals were tiny, about the thickness of a human hair.

“Key to our investigation were zircon — or to be more precise: zirconium silicate — crystals that we found in the oceanic sediments of a borehole, which is located almost 400 kilometers (250 miles) northeast of the impact site, in the Atlantic Ocean,” says co-author Wartho, who began the study when she was a lab manager at the Mass Spectrometry Lab at ASU.

For this study, Biren worked with co-authors Wartho (now working at GEOMAR Helmholtz Centre for Ocean Research Kiel), Van Soest and Hodges to prepare samples for analysis and to date zircon crystals with the uranium-thorium-helium dating method. Biren then identified and processed shocked zircon fragments for imaging and chemical analysis with an electron microprobe.

“This research adds a tool for investigators dating terrestrial impact structures,” Biren said. “Our results demonstrate the uranium-thorium-helium dating method’s viability for use in similar cases, where shocked materials were ejected away from the crater and then allowed to cool quickly, especially in cases where the sample size is small.”