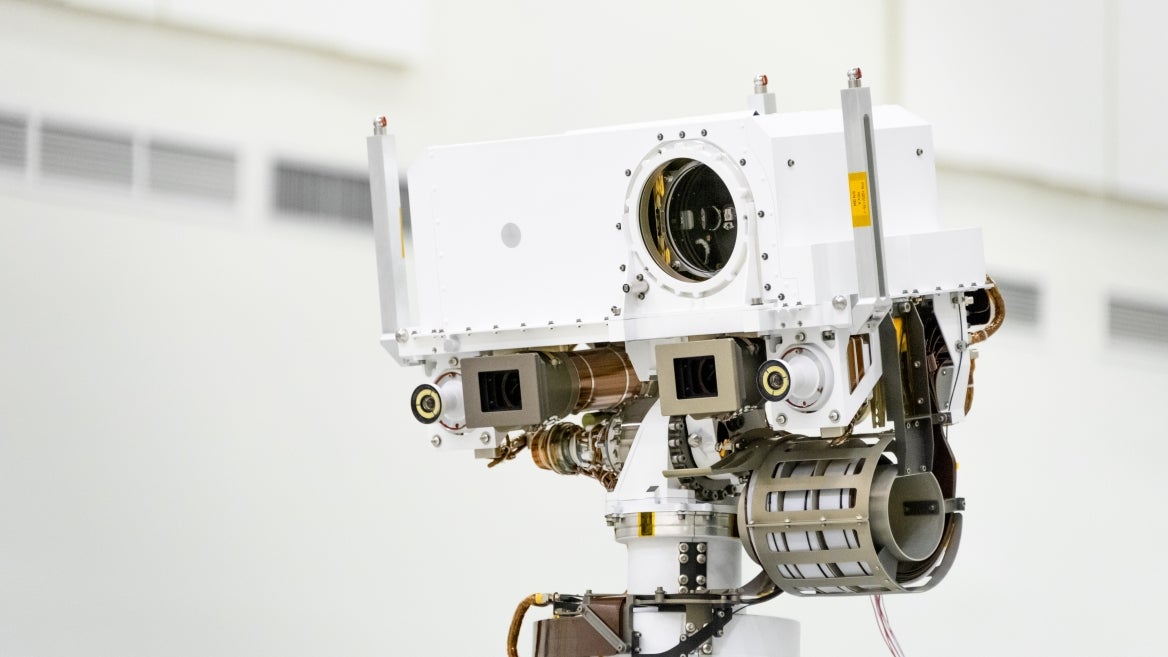 In June, the Arizona State University-led mast-mounted camera system for NASA’s Mars 2020 rover mission, "Mastcam-Z," was delivered to NASA’s Jet Propulsion Laboratory (JPL) and the cameras were officially installed on the rover’s mast.

Now, the cameras are in “ATLO,” which stands for “Assembly, Test and Launch Operations.” This stage of the Mars 2020 mission is where the rover is assembled, tested and prepared for launch.

Part of this process involves essential calibration testing of the cameras, which takes place on-site at JPL and also remotely by the Mastcam-Z team on the ASU Tempe Campus. The most recent testing was just a few weeks ago.

"This was one of our first tests of transferring Mastcam-Z digital photos out of the cameras and into the rover's computer, then through the JPL telemetry system, and then distributed to our operations and data processing team at ASU,” explained Mastcam-Z’s principal investigator Jim Bell, of ASU’s School of Earth and Space Exploration.

“We'll be doing that kind of data flow every day once the rover is on Mars, except the cameras will be more than 130 million miles away, instead of just 400 miles away!”

During the testing process, the team captures images of targets that are different sizes and shapes so that they can calibrate the cameras, remove distortions and ultimately produce images that are of scientific value for the mission.

“By imaging dots and other targets placed at various distances and angles around the rover, we're doing a complete shakedown of the stereo performance of the system, so that we'll know precisely how to process the images and make our 3D views of the landscape once we're on Mars," Bell said.

“During testing, we were monitoring the geometric calibration happening at JPL and remotely reviewing instrument telemetry and verifying that commands were being executed,” said Kristen Paris, Mastcam-Z’s Downlink Operations lead.

Ernest Cisneros, the Mastcam-Z Ground Data System lead, was also on the ASU campus during the testing, working remotely with JPL. His role was to ensure network connectivity, advise on software tools, debug software problems and assist with data analysis.

“This was the first significant test of the Mastcam-Z cameras since they’ve been fully integrated on the Mars 2020 rover,” Cisneros said. “We were able to fully test the flow of data, our downlink capabilities, and where we have issues that need to be resolved, so that we can be ready for launch and flight operations.”

Testing like this is essential for all components of the Mars 2020 mission. Over the next year, until launch of the mission in July 2020, the cameras will undergo many more tests to ensure success for both the instruments and the human teams responsible for them.

“It will be exciting to be among the first people to see these spectacular images streaming back every day from the Red Planet,” Bell said. “But we have a lot of work to do to turn them into the panoramas and other image products (like 3D models) that will be used to influence rover operations every day. We need to practice, and these kinds of tests are giving us our first chances."

Mastcam-Z is a dual camera system that can zoom in (hence the "Z" in Mastcam-Z), focus and create 3D pictures and panoramas at a variety of scales. This will allow the Mars 2020 rover to provide a detailed examination of both close and distant objects on Mars.

The two cameras are mounted on the Mars 2020 rover mast at the eye level of a 6-foot-6-inch tall person. They are separated by 9.5 inches to provide stereo vision and they will produce images of color quality similar to that of a consumer digital HD camera (2 megapixels).

The cameras are designed to help other Mars 2020 experiments on the rover by looking at the whole landscape and identifying rocks and soil (regolith) that deserve a closer look by other instruments. They will also spot important rocks for the rover to sample and cache on the surface of Mars, for eventual return (by a future mission) to Earth.

Bell leads the Mastcam-Z team, which includes dozens of scientists, engineers, operations specialists, managers and students at ASU. In addition, the team includes deputy principal investigator Justin Maki of NASA's Jet Propulsion Laboratory; the Planetary Society, which serves as the instrument’s education and public outreach partner; and Malin Space Science Systems, Inc., which is the prime subcontractor for instrument development and uplink operations.

About the Mars 2020 Mission

Mars 2020 will launch from Cape Canaveral Air Force Station in Florida in July of 2020, landing on Mars in February 2021. The mission is expected to last at least one Mars year (687 Earth days). JPL is building and will manage operations of the Mars 2020 rover for the NASA Science Mission Directorate at the agency's headquarters in Washington.

The mission is part of NASA's Mars Exploration Program, a long-term effort of robotic exploration of the Red Planet. The mission addresses high-priority science goals for Mars exploration, including key questions about the potential for life on Mars. The mission also seeks to gather knowledge and to demonstrate technologies that address the challenges of future human expeditions to Mars. These include testing a method for producing oxygen from the Martian atmosphere, identifying other resources (such as subsurface water), improving landing techniques and characterizing weather, dust and other potential environmental conditions that could affect future astronauts living and working on Mars.