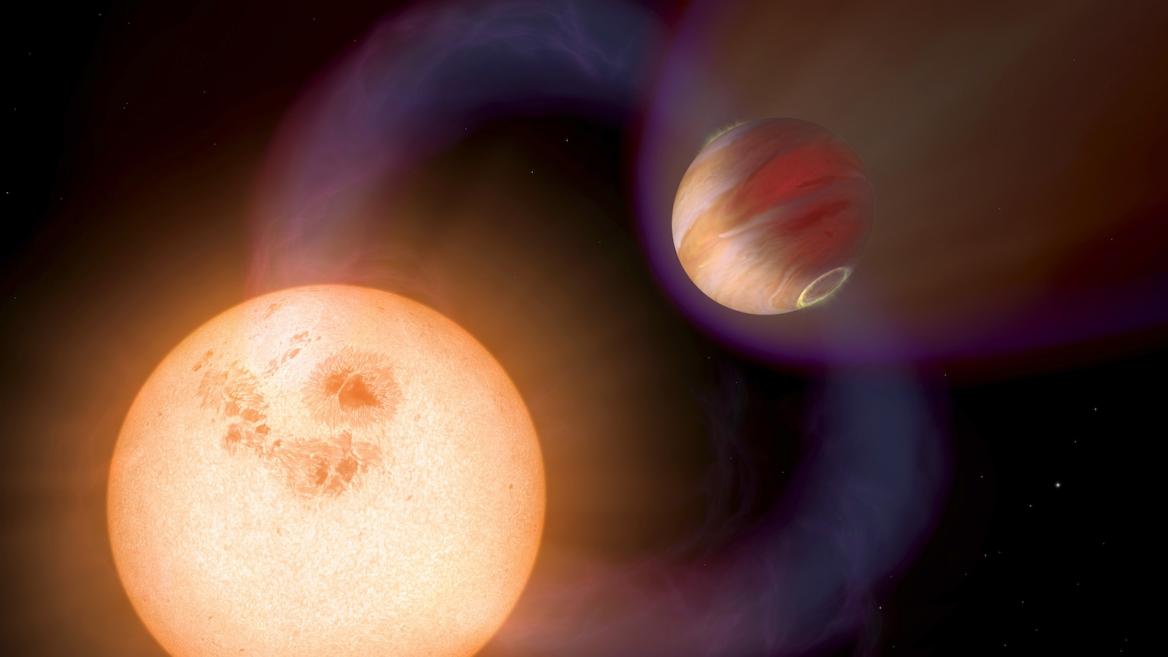 Gas-giant planets orbiting close to other stars have powerful magnetic fields, many times stronger than our own Jupiter, according to a new study by a team of astrophysicists. It is the first time the strength of these fields has been calculated from observations.

The team, led by Wilson Cauley of the University of Colorado, also includes associate professor Evgenya Shkolnik of Arizona State University's School of Earth and Space Exploration. The other researchers are Joe Llama of Lowell Observatory and Antonino Lanza of the Astrophysical Observatory of Catania in Italy. Their report was published July 22 in Nature Astronomy.

"Our study is the first to use observed signals to derive exoplanet magnetic field strengths," said Shkolnik. "These signals appear to come from interactions between the magnetic fields of the star and the tightly orbiting planet."

More than 3,000 exoplanet systems containing over 4,000 planets have been discovered since 1988. Many of these star systems include what astronomers call "hot Jupiters." These are massive gaseous planets presumed to be like the sun's Jupiter but orbiting their stars at close distances, typically about five times the star's diameter, or roughly 20 times the moon's distance from Earth.

Such planets travel well inside their star's magnetic field, where interactions between the planetary field and the stellar one can be continual and strong.

Previous studies, the team says, have placed upper limits on exoplanet magnetic fields, for example from radio observations or derived purely from theory.

"We combined measurements of increased stellar emission from the magnetic star-planet interactions together with physics theory to calculate the magnetic field strengths for four hot Jupiters," lead author Cauley said.

The astrophysicists used telescopes in Hawaii and France to acquire high-resolution observations of emission from ionized calcium (Ca II) in the parent stars of the four hot Jupiters. The emission comes from a star's hot, magnetically heated chromosphere, a thin layer of gas above the cooler stellar surface. The observations let the team calculate how much energy was being released in the stars' calcium emission.

"When this happens," Cauley said, "energy can be released as the two fields reconnect, and this heats the star's atmosphere, increasing the calcium emission."

Astrophysicists have suspected that hot Jupiters would, like our own Jupiter, have magnetic fields produced deep inside them. The new observations provide the first probe of the internal dynamics of these massive planets.

"This is the first estimate of the magnetic field strengths for these planets based on observations, so it's a huge jump in our knowledge," Shkolnik noted. "It's giving us a better understanding of what is happening inside these planets."

She adds that it should also help researchers who model the internal dynamos of hot Jupiters. "We knew nothing about their magnetic fields — or any other exoplanet magnetic fields — and now we have estimates for four actual systems."

The field strengths, the team says, are larger than one would expect considering only the rotation and age of the planet. The standard dynamo theory of planetary magnetic fields predicts field strengths for the sampled planets that are much smaller than what the team found.

Instead, the observations support the idea that planetary magnetic fields depend on the amount of heat moving through the planet's interior. Because they are absorbing a lot of extra energy from their host stars, hot Jupiters should have larger magnetic fields than planets of similar mass and rotation rate.

"We are pleased to see how well the magnitude of the field values corresponded to those predicted by the internal heat flux theory," Shkolnik said. "This may also help us work toward a clearer understanding of magnetic fields around temperate rocky planets."