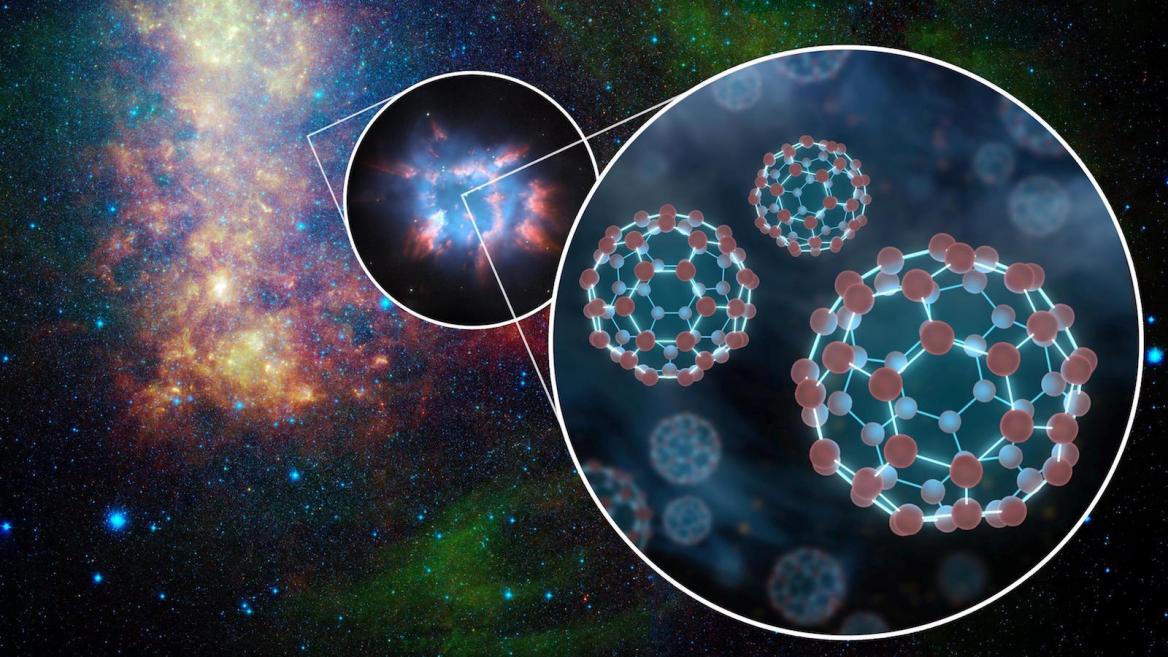 Astrophysicists know that iron (chemical symbol: Fe) is one of the most abundant elements in the universe, after lightweight elements such as hydrogen, carbon and oxygen. Iron is most commonly found in gaseous form in stars such as the sun, and in more condensed form in planets such as Earth.

Iron in interstellar environments should also be common, but astrophysicists detect only low levels of the gaseous kind. This implies that the missing iron exists in some kind of solid form or molecular state, yet identifying its hiding place has remained elusive for decades.

A team of cosmochemists at Arizona State University, with support from the W.M. Keck Foundation, now claims that the mystery is simpler than it seems. The iron isn't really missing, they say. Instead it's hiding in plain sight. The iron has combined with carbon molecules to form molecular chains called iron pseudocarbynes. The spectra of these chains are identical with the much more common chains of carbon molecules, long known to be abundant in interstellar space.

The team's work was published late in June in the Astrophysical Journal.

"We are proposing a new class of molecules that are likely to be widespread in the interstellar medium," said Pilarisetty Tarakeshwar, research associate professor in ASU's School of Molecular Sciences. His co-authors, Peter Buseck and Frank Timmes, are both in ASU's School of Earth and Space Exploration; Buseck, an ASU Regents Professor, is also in the School of Molecular Sciences with Tarakeshwar.

The team examined how clusters containing only a few atoms of metallic iron might join with chains of carbon molecules to produce molecules combining both elements.

Recent evidence obtained from stardust and meteorites indicates the widespread occurrence of clusters of iron atoms in the cosmos. In the extremely cold temperatures of interstellar space, these iron clusters act as deep-freeze particles, enabling carbon chains of various lengths to stick to them, thus producing different molecules from those that can occur with the gaseous phase of iron. Iron pseudocarbynes are likely widespread in the interstellar medium, where extremely cold temperatures would lead carbon chains to condense on the Fe clusters. Over eons, complex organic molecules would to emerge from these Fe pseudocarbynes. The model shows a hydrogen-capped carbon chain attached to an Fe13 cluster (iron atoms in reddish brown, carbon is gray, hydrogen is light gray). Illustration credit: P. Tarakeshwar/ASU

Said Tarakeshwar, "We calculated what the spectra of these molecules would look like, and we found that they have spectroscopic signatures nearly identical to carbon-chain molecules without any iron." He added that because of this, "previous astrophysical observations could have overlooked these carbon-plus-iron molecules."

That means, the researchers say, the missing iron in the interstellar medium is actually out in plain view but masquerading as common carbon-chain molecules.

Buseck explained, "Longer carbon chains are stablized by the addition of iron clusters." This opens a new pathway for building more complex molecules in space, such as polyaromatic hydrocarbons, of which naphthalene is a familiar example, being the main ingredient in mothballs.