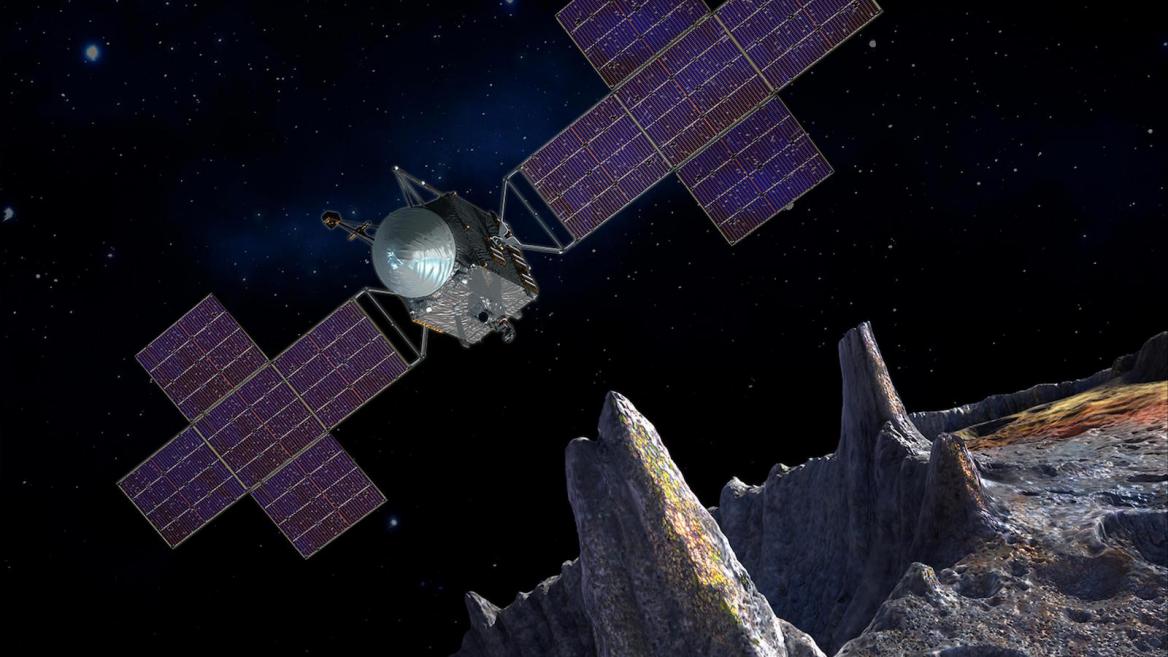 The ASU-led NASA Psyche Mission is inviting undergraduate students from any university or community college in the U.S. and its territories to apply to become one of the space mission’s featured creatives, or “Psyche Inspired Interns,” for the 2019–20 academic year.

The goal of Psyche Inspired is to share the excitement, innovation and scientific and engineering content of NASA’s Psyche Mission through artistic and creative works. Prior Psyche Inspired interns have brought their mission-inspired artistic ideas to life in an array of mediums including stop-motion animation, clothing and jewelry design, ceramics, needlepoint and acrylic, all of which are highlighted on the Psyche Mission’s official Psyche Inspired webpage.

The application for the 2019–20 academic year can be found on the Psyche Inspired Application webpage. The deadline for applications is Aug. 9 at 1 p.m. PDT.

Up to 16 interns will be selected for the 2019–20 academic year, which has been dubbed the “Cobalt Class.” If selected for the program, students will be supplied with a stipend of $250 to purchase materials, such as art supplies, computer software and crafting materials needed to create their works.

Selection criteria includes the quality and originality of sample work submitted, as well as responses to application questions and references. The selection panel will also look to include the best and widest range of creative genres and presentation styles.

Each Psyche Inspired intern selected for the 2019–20 program is expected to create at least one original creative work every six weeks, for a total of four works throughout the school year. In the spring, these works will be curated into a show available online, as well as incorporated into a coffee-table book.

“The Psyche Inspired program is unique because it challenges students from different backgrounds and majors to create original works that explain complex topics,” said Brooke Owen, the program’s student manager. “Then those original works become great outreach tools that allow the public to connect with the Psyche mission and space exploration as a whole.”

During the internship, the new 2019–20 Cobalt Class interns will learn about the Psyche mission by talking to experts including scientists, staff, scientific artists and engineers. Weekly virtual meetings allow interns to talk about their projects, ask questions and receive feedback. This support allows the interns to create scientifically accurate pieces that will inspire and educate the public.

“Applying to Psyche Inspired was one of the best decisions I've made,” said Psyche Inspired intern Ryan Powell, a music major from Albion College in Michigan. “If you're an open-minded, art- and science-loving, motivated space nerd, then you should consider applying. Not only will you personally gain from the experience, others will gain from the things you create as well."

Participants in the program are also encouraged to collaborate with their peers, enabling them to develop skills and relationships with people around the country with diverse academic backgrounds and artistic abilities.

"The Psyche Inspired program was such an awesome experience to be a part of, not only being involved with a NASA mission, but meeting and collaborating with other artists,” said Psyche Inspired intern Jessika Raisor, an animation major from the Columbus College of Art and Design in Ohio.

“I was worried I wouldn’t fit in when I applied since I didn’t have a science background, but that wasn’t the case at all,” said Psyche Inspired intern Addison Rizer, an English major at Arizona State University. “We all brought our own skills to the mission; we were all there to learn and grow together. It was an incredible experience.”

The Psyche spacecraft is planned to launch in August 2022 and travel to the asteroid using solar-electric (low-thrust) propulsion. After flying by Mars in 2023 for a gravity assist, the spacecraft will arrive at Psyche in 2026 and spend 21 months orbiting the asteroid, mapping it and studying its properties.

The spacecraft's instrument payload will include a magnetometer, a multispectral imager and a gamma ray and neutron spectrometer. The mission will also test a sophisticated new laser communications technology, called Deep Space Optical Communications (DSOC).