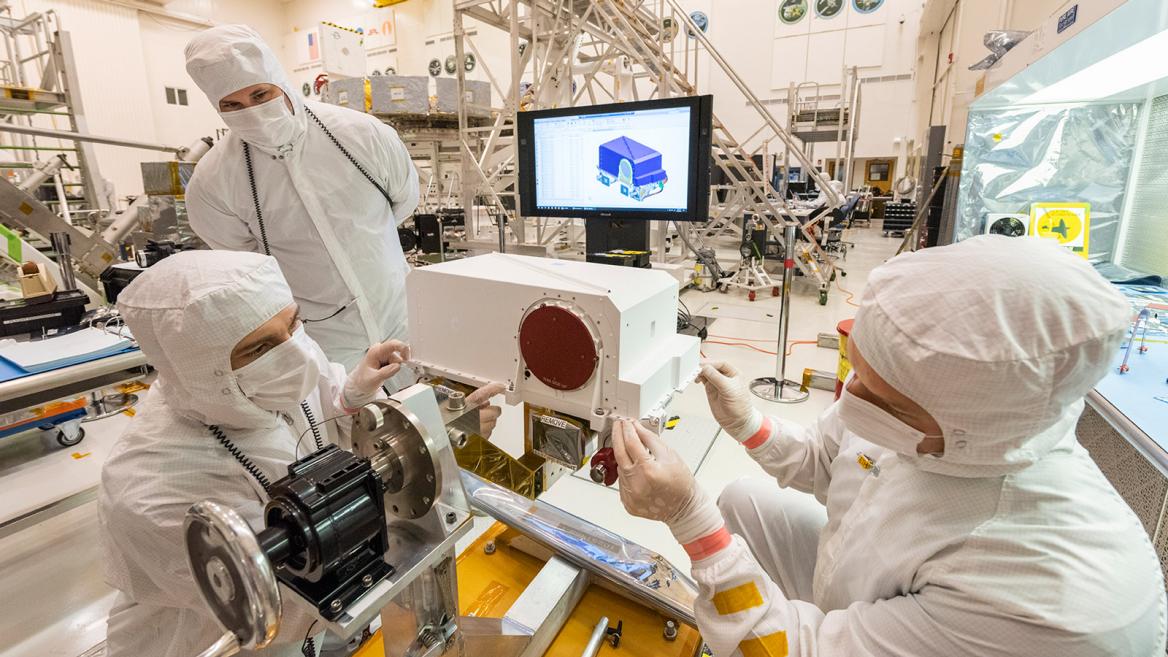 The Arizona State University-led mast-mounted camera system for NASA’s Mars 2020 rover mission, "Mastcam-Z," achieved a major milestone recently when the instrument was delivered to NASA’s Jet Propulsion Laboratory, and the cameras were officially installed on the rover’s mast.

Mastcam-Z is a dual camera system that can zoom in (hence the "Z"), focus and take 3D pictures and panoramas at a variety of scales. This will allow the Mars 2020 rover to provide a detailed examination of both close and distant objects on Mars.

The two cameras are now mounted on the Mars 2020 rover mast at the eye level of a 6-foot-6-inch person. They are separated by 9.5 inches to provide stereo vision and they will produce images of color quality similar to that of a consumer digital HD camera (2 megapixels).

“It's a bittersweet feeling for our team, kind of like sending a child off to college, because we'll never be as close to them as we have been over the past few years,” Bell said. “During testing and calibration we showed that the cameras work spectacularly well — meeting or exceeding all of their performance requirements. Now they are heading off to their new home high atop the Mars 2020 rover, which will soon head off to its new home — Jezero crater, on Mars.”

The cameras are designed to help other Mars 2020 experiments on the rover by looking at the whole landscape and identifying rocks and soil (regolith) that deserve a closer look by other instruments. They will also spot important rocks for the rover to sample and cache on the surface of Mars, for eventual return to Earth by a future mission.

The cameras are now in “ATLO” which stands for Assembly, Test and Launch Operations. This phase of the Mars 2020 mission is where the rover is assembled, tested and prepared for launch.

“It was a surreal experience to see these cameras follow in the footsteps of so many great instruments and missions,” said Andy Winhold, ASU Mastcam-Z calibration engineer. “To know that the cameras were bound for JPL's Spacecraft Assembly Facility where the Mars 2020 rover is being assembled adds a historical and human significance to the whole experience. The facility itself is just a giant room stocked with tools and engineers, but when you bring in the hard work, care and passion of all those involved, the process carries a weight you can feel.”

In addition, scientists and engineers from the University of Copenhagen in Denmark have been responsible for the design and testing of the Mastcam-Z calibration targets, which were recently delivered to JPL and will be mounted onto the rover's deck in the next few weeks.

“We first dreamed up the Mastcam-Z cameras more than six years ago when we sent in our proposal to NASA,” Bell said. “Initially the cameras existed only as PowerPoint slides, CAD models and spreadsheets. Then, with this team, the cameras started becoming real, physical objects that we could take real photos with. Now we've reached the next step, delivering them to JPL to be mounted on the rover.”

About the Mars 2020 Mission

Mars 2020 will launch from Cape Canaveral Air Force Station in Florida in July 2020, landing on Mars in Jezero Crater in February 2021. The mission is expected to last at least one Mars year (687 Earth days). JPL is building and will manage operations of the Mars 2020 rover for the NASA Science Mission Directorate at the agency's headquarters in Washington.

The mission is part of NASA's Mars Exploration Program, a long-term effort of robotic exploration of the Red Planet. The mission addresses high-priority science goals for Mars exploration, including key questions about the potential for life on Mars. The mission also seeks to gather knowledge and to demonstrate technologies that address the challenges of future human expeditions to Mars. These include testing a method for producing oxygen from the Martian atmosphere, identifying other resources (such as subsurface water), improving landing techniques, and characterizing weather, dust and other potential environmental conditions that could affect future astronauts living and working on Mars.