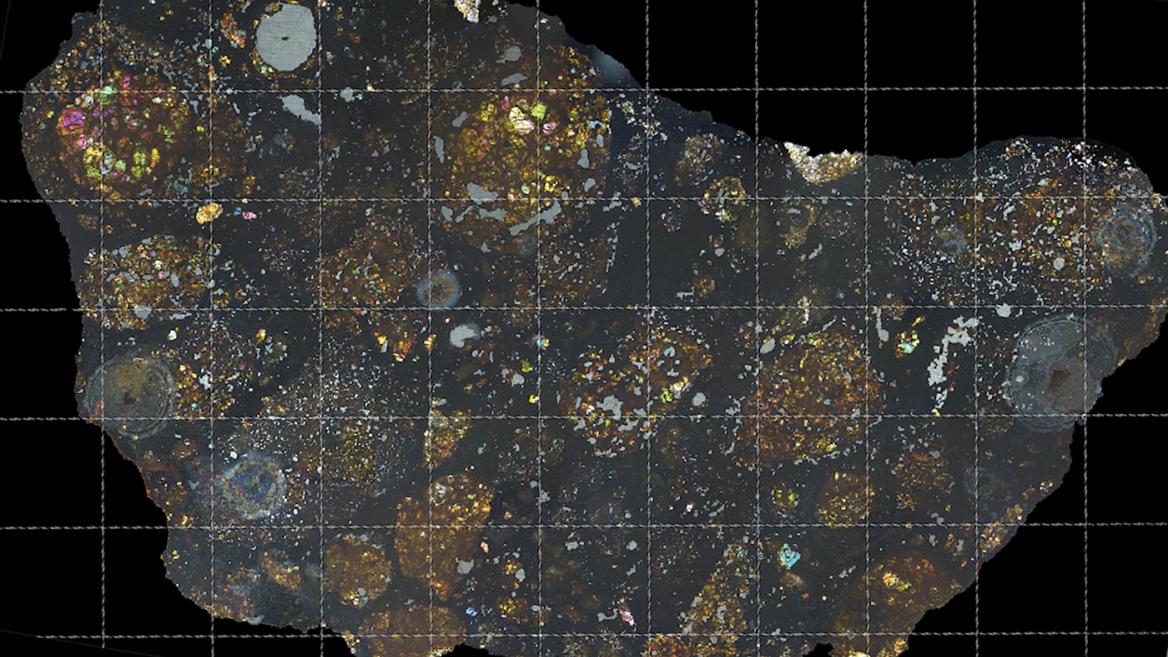 Team finds tiny fragment of a comet inside a meteorite

A tiny piece of the building blocks from which comets formed has been discovered inside a primitive meteorite. The discovery by a Carnegie Institution for Science-led team, including a researcher now at Arizona State University, was published April 15 in Nature Astronomy.

The finding could offer clues to the formation, structure and evolution of the solar system.

"The meteorite is named LaPaz Icefield 02342," said research scientist Jemma Davidson, of ASU's Center for Meteorite Studies in the School of Earth and Space Exploration. "The name comes from where it was found in Antarctica's LaPaz Icefield."

She adds that it belongs to a class of primitive carbonaceous chondrite meteorites that have undergone minimal changes since they formed more than 4.5 billion years ago, likely beyond the orbit of Jupiter.

Meteorites were once part of larger bodies, asteroids, which broke up due to collisions in space and then survived the trip through Earth’s atmosphere. Their makeup can vary substantially from one meteorite to the next, reflecting their origins in diverse parent bodies that formed in different parts of the solar system.

Asteroids and comets both formed from the disk of gas and dust that once surrounded the young sun, but they aggregated at different distances from it, which affected their chemical makeup. Compared to asteroids, comets contain larger fractions of water ice and far more carbon, and typically formed farther from the sun where the environment was colder.

By studying a meteorite’s chemistry and mineralogy, researchers such as the paper’s lead author, Carnegie’s Larry Nittler, can unlock details about its formation and how much heating and other chemical processing it experienced during the solar system’s formative years.

'Bonbon' with a surprise inside

Inside the LaPaz meteorite, Nittler’s team found a very carbon-rich slice of primitive material. It bears some striking similarities to extraterrestrial dust particles that are thought to have originated in comets that formed near the solar system’s outer edges.

Approximately 3 million to 3.5 million years after the solar system formed, but while Earth was still growing, this tiny object — about one-tenth of a millimeter across — was captured by the growing asteroid from which the meteorite originated.

"Primitive meteorites provide a snapshot of the early solar system that we can study in the lab,” Davidson said. "The LaPaz meteorite is a nice example since it has experienced minimal terrestrial weathering."

Meteorites like LaPaz, she notes, are great places to hunt for presolar grains, microscopic pieces of stardust formed by stars that predate the solar system. But none of the team expected also to find evidence for a surviving cometary building block inside a meteorite.

"When I saw the first electron images of the carbon-rich material," Davidson said, "I knew we were looking at something very rare. It was one of those exciting moments you live for as a scientist."

By undertaking sophisticated chemical and isotopic analysis of the material, Nittler and his colleagues — who besides Davidson include Carnegie’s Conel Alexander as well as Rhonda Stroud and Bradley De Gregorio of the U.S. Naval Research Laboratory, and Josep Trigo-Rodríguez, Carles Moyano-Cambero and Safoura Tanbakouei of the Institute of Space Sciences in Barcelona, Catalonia — were able to show that the encased material likely originated in the icy outer solar system along with objects from the Kuiper Belt, where many comets originate.

"Because this sample of cometary building-block material was swallowed by an asteroid and preserved inside this meteorite, it was protected from the ravages of entering Earth’s atmosphere," Nittler explained. "It gave us a peek at material that would not have survived to reach our planet’s surface on its own, helping us to understand the early solar system's chemistry."

The existence of this primitive material captured inside the meteorite suggests that due to the drag caused by the surrounding gas, particles like it migrated from the outer edges of the solar system, where comets and Kuiper Belt objects formed, to the closer-in area beyond Jupiter, where the carbonaceous chondrites formed. This reveals details about how our solar system’s architecture took shape during the early stages of planet formation.

"Discoveries like this demonstrate how important it is to retrieve precious meteorites like LaPaz from Antarctica," Davidson said. "We never know what secrets they’ll reveal."

Top image: LaPaz Icefield 02342, named for where it was found in Antarctica, is a primitive meteorite of a type that formed at the dawn of solar system history. However, this particular meteorite (seen here in thin section by polarized light) contained a scientific surprise: a carbon-rich fragment of a cometary building block. Image by Carles Moyano-Cambero/Institute of Space Sciences, Barcelona