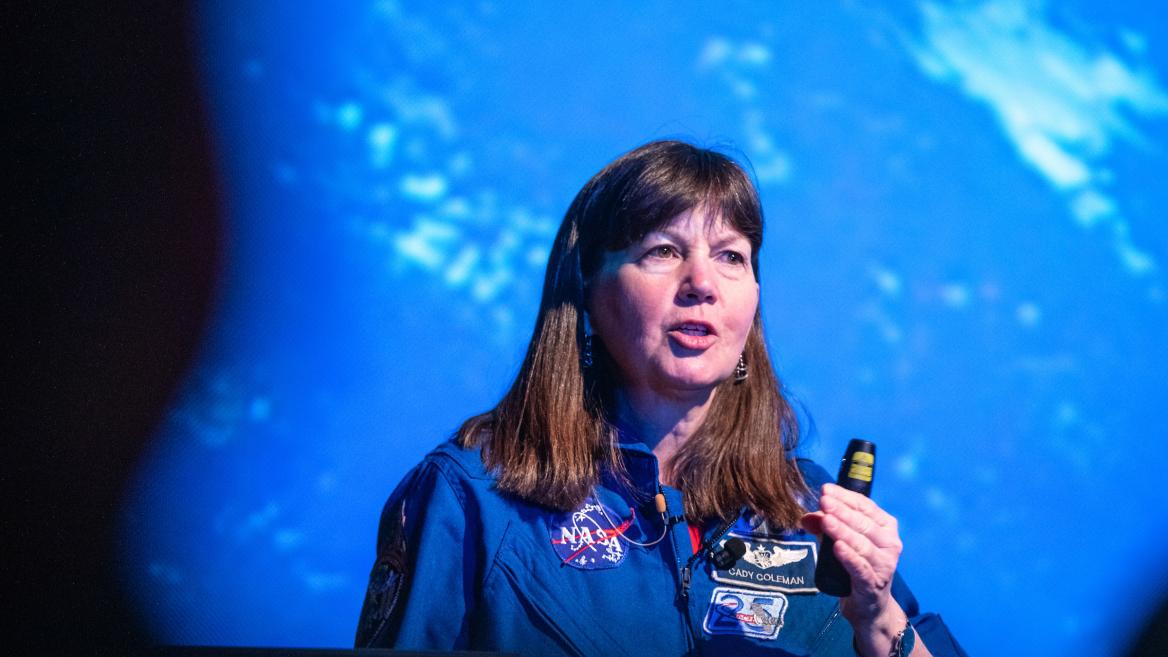 The power of space

“Space is compelling,” understated astronaut Cady Coleman at the end of her inaugural lecture at Arizona State University as the new Global Explorer in Residence.

Amidst her 24 years at NASA, Coleman spent six months on board the International Space Station, as well as two space shuttle missions.

Being launched into space, “there’s nothing like it,” Coleman told a packed house at Marston Exploration Theater in Tempe. “You realize once those engines light, you are going somewhere and you are not going to stop until you get there.”

Getting to space takes 8.5 minutes. The station is as wide as a football field. At the 50-yard line sits the crew quarters, storage areas and labs. The length of 10 train cars strung together, it’s “a city in space.”

And after you arrive it’s an endless lesson in looking at everything in new ways — from people to the planet to water, it’s all different up there.

Being in zero gravity gives a new way of looking at common things, such as water. “What does liquid really want to do?” Coleman said, showing photos of globs of liquid floating around. “Surface tension becomes the dominant force.”

Frequent medical tests to see what living in space does to humans are part of flying on the ISS. She learned women in space lose bone density 10 times faster than a 70-year-old woman with osteoporosis. What the 70-year-old loses in a year, younger women lose that in a month in space. (Exercise, however, can replace the lost density, at least in certain areas.)

“The work we do for space and exploration is very compelling,” Coleman said.

As the lead robotics and lead science officer aboard the station, she performed the second-ever robotic capture of a supply ship from the station. A 16-ton supply ship can be dangerous to lasso in. “This is something completely routine,” she said.

What is not routine is learning how to get along with people very different from you. Of the thousands of questions and requirements and needs NASA throws at astronauts, “Will you like this person?” is not one of them.

Her Russian crewmate Dmitri Kondratyev lacked the American trait of smiling for the camera.

“I needed to realize I can’t rely on what I see on the outside, and we come from different places and different cultures,” Coleman said. “All of us bring things the others can’t see. ... In order to be a really effective team, you have to connect with each other.”

This was the theme of her lecture — “Lessons from Space Lead Straight Back to Earth” — and she brought it home.

One space lesson, that it’s normal to toss things around — demonstrated in a video of her slow-motion tossing her flute from side to side after performing an Earth-space duet with Jethro Tull's Ian Anderson — had to be unlearned back home. Astronaut (and space flautist) Cady Coleman shares photos and videos of her adventures aboard the International Space Station during her inaugural lecture as the new Global Explorer in Residence for ASU's Interplanetary Initiative. Photo by Charlie Leight/ASU Now

When her mission ended, “I remember landing as the wheels touched down and I thought, “That was too soon.’ ... I would have lived another six months up there in a minute.”

“It makes you feel like a citizen of everywhere,” looking down on the planet, she said.  When she returned home, she asked a cab driver where he was from.

“I was just there!” she thought, having passed over the Sinai Peninsula in the ISS.

Looking back on that time, she considered it a lesson in using the art of perspective.

“If you try to stretch your perspective and see people and work and jobs in a different way, you can work well together as a team,” she said. “Every one of us has something inside we should bring out and have others help us use.”

Down in Tempe, as well as being the Global Explorer in Residence for ASU’s Interplanetary Initiative, Coleman is also a professor of practice in the School of Earth and Space Exploration.

As well as being an astronaut, Coleman is a chemist and a retired U.S. Air Force colonel.

In her spare time, she coached actress Sandra Bullock in preparation for Bullock’s astronaut role in the movie “Gravity.” During her time on the ground at NASA, Cady served in a variety of roles within the Astronaut Office, including chief of robotics, lead for tile repair efforts after the Columbia accident, and lead astronaut for integration of supply ships from NASA’s commercial partners, SpaceX and Northrop Grumman. Before retiring from NASA, she led open-innovation and public-private partnership efforts for the Office of the Chief Technologist at NASA Headquarters.

Cady earned a BS in chemistry from MIT in 1983 and a PhD in polymer science and engineering from the University of Massachusetts in 1991. Commissioned as a second lieutenant in the U.S. Air Force, she pioneered new materials for aviation as a research chemist before being selected as an astronaut in 1992.

Top photo: Astronaut and ASU Global Explorer in Residence Cady Coleman talks about her adventures in space during her inaugural lecture at the Marston Theater in Tempe on Thursday. Coleman, a retired Air Force colonel, spent more than 180 days in space. Photo by Charlie Leight/ASU Now