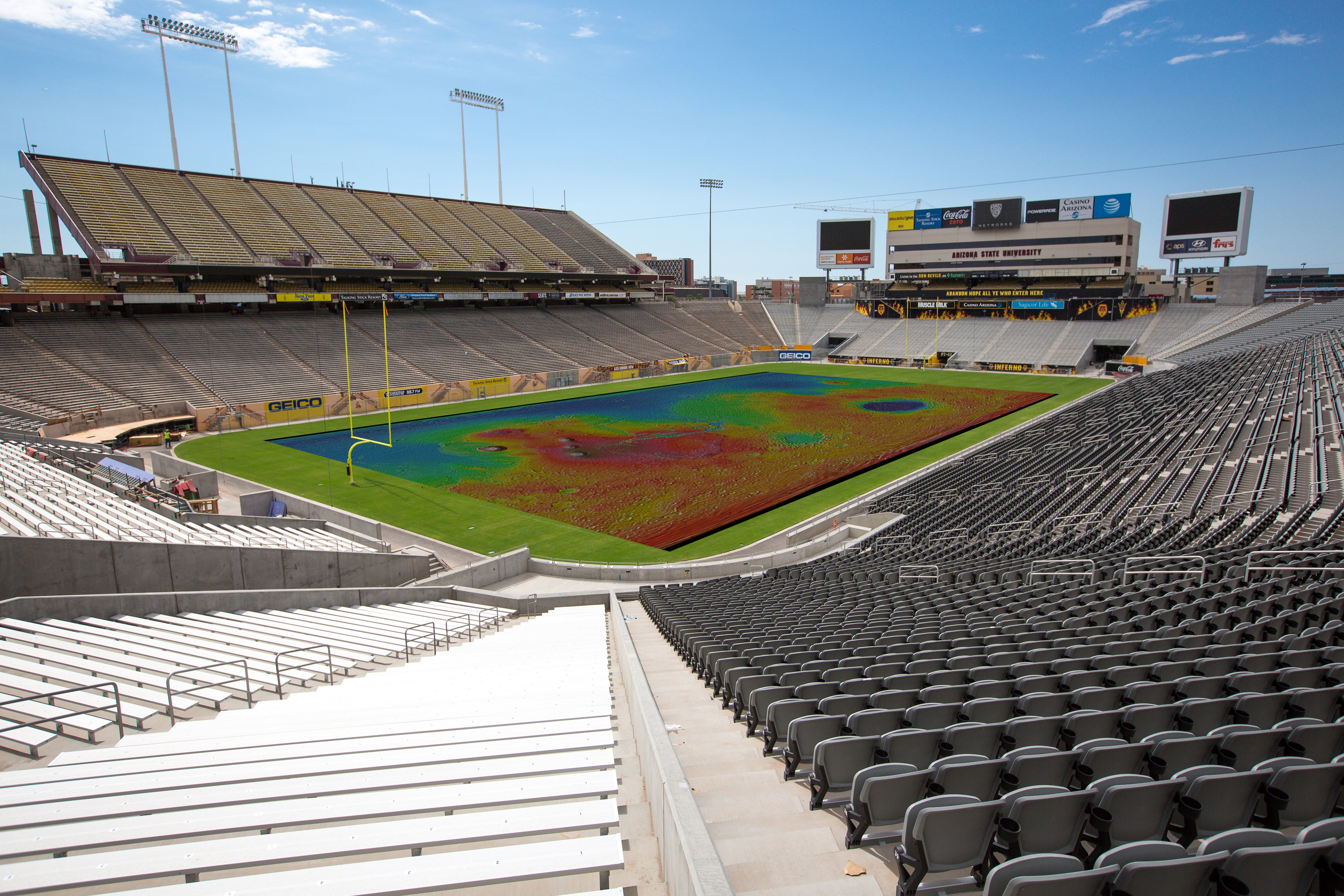 More than 265,000 images have been collected over the mission’s lifetime, and the best of those have been painstakingly stitched together into a global mosaic, which was then printed on vinyl so that it could function as a durable, portable and walkable "Map of Mars."

The vinyl map, which is currently the size of a basketball court, has been displayed at dozens of events and has been walked on by more than 5,000 participants. It is also slated to be on display at a "Mars on the Mall" event in front of the Smithsonian Institution's National Air and Space Museum in Washington, D.C., in May of this year.

While a basketball-court-size walkable map of Mars is impressive, the map is still too small to display the THEMIS images at full resolution. So, in celebration of THEMIS’ 18th anniversary, the ASU Mars team has a dream to see this map at its full resolution (100 meters per pixel), filling a certain nearby football stadium.

To do so, they are seeking help from the public to raise $35,000 to make the dream a reality and to set a world record for the largest ever map of Mars.

“We want to share everything that THEMIS has taught us about Mars,” said ASU Mars researcher and map designer Jonathon Hill. “We are asking all members of the ASU community and Mars enthusiasts around the world to help us raise funds for a football-field-size map, so we can share the excitement of Mars exploration with as many people as possible.”

For this fundraising effort, the Mars team has set up an ASU Pitchfunder "Walk on Mars" webpage where the public can choose their donation amount, ranging from as little as $5 up to $762, which represents one penny for each of the 76,200 orbits Odyssey has made around Mars.

Donations to help create the map are being accepted throughout the month of March. All donors will be added to a mailing list and will receive exclusive updates about the map’s production and be the first to know when the map will be displayed, which the team hopes will be at Sun Devil Stadium in Tempe.

"From the beginning of Mars Odyssey's mission, the THEMIS team has been keen to convey the excitement of Mars exploration to students and the public," said THEMIS instrument principal investigator and Regents’ Professor, Philip Christensen. "This is the latest step in that process."

NASA’s Mars Odyssey spacecraft and ASU’s THEMIS camera launched to Mars on April 7, 2001. Today, it is the longest-lived robotic spacecraft in the history of Mars exploration. The instrument has acquired over 265,000 infrared images of the Martian surface since starting science operations in February 2002.

The THEMIS images were taken in Martian daytime at infrared wavelengths. For the vinyl map, each image was individually blended into the global map, one piece at a time. They cover the entire planet pole-to-pole and show every surface feature larger than 100 meters (roughly a football field) in size.

To provide the third dimension, the THEMIS image mosaic is combined with elevation data from another NASA instrument, the Mars Orbiter Laser Altimeter, or MOLA. This instrument's data is colored-coded to show elevation relative to Martian "sea level," which is the planet's average radius. Following terrestrial mapping practices, MOLA elevations below this altitude appear in cool colors, while the higher elevations are in warm tones that turn white at the highest elevations.

When fully funded, the football-field-sized map will be printed on durable vinyl ordinarily used for billboards and giant outdoor advertising wraps. Together with its plastic underpad, the giant map will be tough enough to let visitors walk upon it wearing socks or other soft foot coverings.

The vinyl "Walk on Mars" map will be transportable and available for display to the public anywhere with a football field (or a football-field-sized space). It is the hope of the ASU Mars team that this map be shared with communities nationwide.