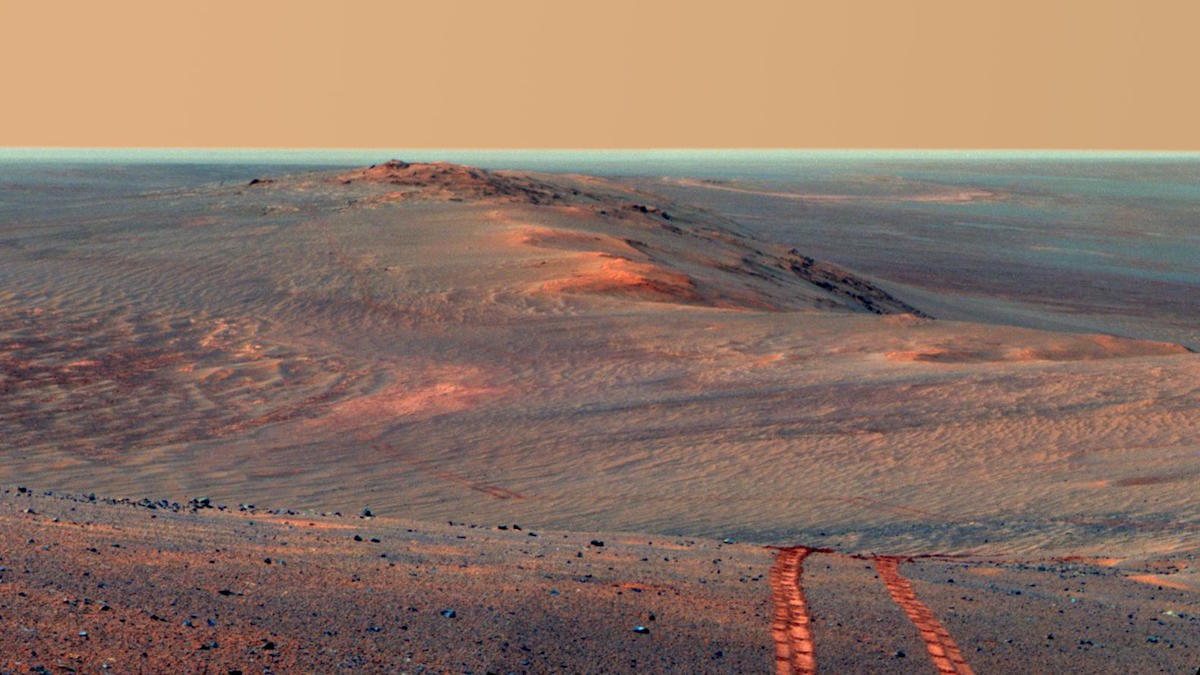 In January 2004 NASA landed two Mars Exploration Rovers opposite sides of the Red Planet. Named Spirit and Opportunity and designed to last just 90 days, they were sent to find evidence of activity by liquid water on the rocks and soils. Their journeys of exploration compelled scientists to rewrite the book of Mars.

Landing in Gusev Crater, Spirit explored the crater's floor and nearby Columbia Hills, discovering evidence for an ancient hot spring and carbonate minerals testifying to abundant water activity in the past. After driving nearly five miles, Spirit became bogged in soft ground and succumbed to the cold of martian winter in March 2010.

It was a hole-in-one, as Opportunity landed in Eagle Crater. The low outcrop directly across the crater revealed both hematite and cross-bedded sedimentary features. NASA image

The other rover, named Opportunity, landed on Meridiani Planum, where spectral data from orbit showed an abundance of hematite, a water-associated iron mineral. On landing, Opportunity identified the hematite-bearing rock and over a 28-mile trek lasting more than 14 years, explored water-altered sandstones and ancient rocks exposed in the rim of a large 14-mile-wide impact crater named Endeavour.

But in the summer of 2018 Opportunity — which like Spirit was solar-powered — fell silent when a global dust storm cut off sunlight for weeks on end. After more than a thousand attempts to contact the rover, on February 13, 2019, NASA announced that Opportunity's mission was over. It had last communicated with Earth on June 10, 2018.

Numerous scientists and graduate students at Arizona State University's School of Earth and Space Exploration have worked on the dual missions of Spirit and Opportunity over the years. Asked about memorable moments from either rover's journey, some of them shared these thoughts.

Probably the most memorable time in the mission was from late January through early May 2004. We were all living on Mars time and operating two spacecraft on opposite sides of the planet at the same time. We never slept — and the Sun never set on the NASA Mars empire!

The mission project had decided that when the rovers landed, scientists and mission engineers would ignore clocks on Earth and instead would live on local Mars time for one or the other of the two rovers. Mars days, however, run 39 minutes longer than Earth days, putting the two clocks quickly out of sync.

This placed mission staff based at the Jet Propulsion Laboratory in California under a lot strain with regard to family life. Scientists, who were staying in rented accommodations and eating in all-night restaurants, had it somewhat easier.

Beautifully exposed in the walls of Endurance Crater were layers of sandstone, dubbed the Burns Formation. This rock forms the surface of Meridiani Planum and consists of layers that have been repeatedly wetted and dried. (A true-scale CGI Opportunity stands at right.) NASA image

For ASU Regents' Professor Philip Christensen, who was the designer and principal investigator for the rovers' Mini-TES spectrometer, living on Mars time gave spare moments to deal with some unexpected snags.

The Mini-TES was designed to be the rovers' remote eyes. It would look out at the rocks all around and find good things to investigate by their infrared spectra. However, it took us a long time for us to learn how to use it because calibrating the instrument on Mars was more challenging than expected. As a result I spent a lot of late nights writing and rewriting code to make it work.

With that done, the Mini-TES pointed us to significant discoveries of water-bearing and water-related minerals — in particular the carbonate rocks in the Columbia Hills of Gusev Crater and the hot spring deposits of opaline silica around Home Plate in the Hills.

Yet looking more broadly, this mission closed a circle for me. When I was a grad student in the 1970s I worked on NASA's Viking Mars mission. That experience was incredibly energizing and really hooked me on being part of a space mission.

With Spirit and Opportunity, I was able to bring along to JPL eight graduate students of mine and for three months immerse them in the same kind of experience I had back on Viking. On a space mission like this any day can bring something entirely new — that's incredibly exciting.

I think often of how lucky I was to be involved in the mission. I was in the right place (ASU, in Phil Christensen's group) at the right time. I was thrilled to be working alongside so many great scientists and engineers.

The most memorable moment for me was seeing the first image of the landing site from Opportunity. With its light-toned rocks and dark, abundant sands, Mars looked so different than the previous landing sites spacecraft had visited. We expected Meridiani Planum to look different, but it was just hard to imagine it ahead of time.

One of the big surprises for mission scientists on landing was seeing thousands of little round pebbles all over the ground. Scientists dubbed them "blueberries," but it took a while before they connected them using Mini-TES spectra with the hematite detected from orbit.

Heat shield and rock: Mission engineers wanted to examine the wreckage of the heat shield to see how well it worked. Just beyond it lies a curious "rock" that turned out to be a nickel-iron meteorite, the first ever found on another planet. NASA images

The plains of Meridiani are noteworthy not only for their hematite "blueberries" but also for their lack of rocks, making this place unlike any other landing site on Mars.

So finding a football-size rock with strange holes in it, perched right next to the smashed heat shield that fell from the sky during Opportunity's fiery descent, was especially weird.  As the first year on Mars was drawing to a close, the team made plans, urged by the engineers, to investigate the heat shield. This made a side trip to Heat Shield Rock, as it came to be known, an easy call.

Over on the Spirit side of Mars, I was hearing rumors about this strange rock and the possibility that it was a meteorite. So when the first infrared spectra from the Mini-TES instrument were scheduled for downlink, I stayed up into the wee hours to be the first to have a look.

My job as a downlink lead for Mini-TES gave me privileged access to these data, which provided compositional information from many meters away, before any of the arm-mounted instruments would get their turn. As soon as the processing was complete, I was shocked to see that the spectrum of this rock looked a lot like the spectrum of the martian sky.

After double-checking that the instrument was actually pointed correctly, it dawned on me that a rock made out of metallic iron would indeed have the spectrum of the sky. That's because metals act like a mirror at infrared wavelengths, and in this case, the rock was reflecting the infrared light of the sky back to Mini-TES.

With great satisfaction, I got to report to the team the next morning that Heat Shield Rock was indeed an iron meteorite, the first meteorite observed on another planet.

Many miles from where it landed, Opportunity reached a target called Endeavour Crater. Here in the rim of the crater, it explored the rocks which were older than any rocks yet visited by landers or rovers on Mars. In effect, the mission began anew at Endeavour. This false-color pancam image looks north. NASA/ASU image

By the summer of 2018 and the global dust storm arose, Opportunity had driven 28 miles from where it landed more than 14 years earlier.

It was partway down Perseverance Valley, a shallow groove in the rim of Endeavour Crater. Scientists were trying to determine whether water or some other agent carved the valley.

Looking toward an extended mission, the science team envisioned driving Opportunity down the wall of Endeavour to where it could examine a resistant outcrop of rock dubbed the "Bench" that might be related to a unit seen earlier in the mission.

After that, the plan was to drive out onto the Endeavour Crater floor. There it would examine large dark ridges of sand, which appear similar to those seen abundantly elsewhere on Mars.

The dust storm that put an end to the journey came with Opportunity partway down Perseverance Valley, a shallow groove in the Endeavour Crater rim. This view combines two Pancam frames showing the valley and looks south over more rim segments to the hills beyond. The arrow shows the probable resting place of Opportunity. NASA images

The final element in the draft plan was to continue onward into the center of Endeavour's floor. Scientists hoped to explore exposures of rock that might be similar or identical to the Burns Formation sandstone, which forms much of the surface of Meridiani Planum which Oppportunity had driven across. Coupled with findings from the Bench, these might help unravel Meridiani's geological history.

But storm winds raised immense amounts of dust, darkening the skies more than scientists had seen over the past 40 years. At some unknown point in the dark and the cold, Opportunity's journey of exploration came to end.