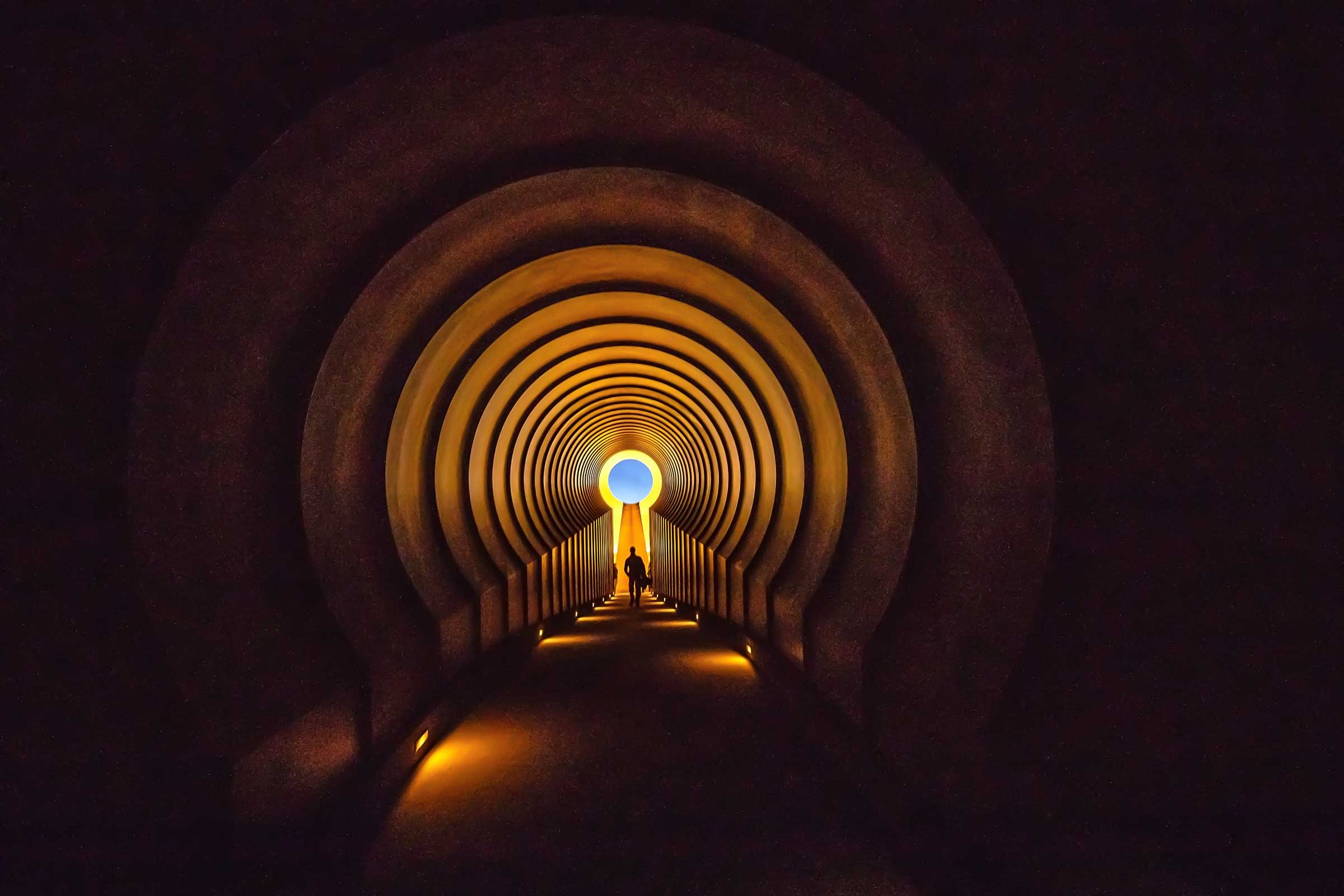 Letting in the light: ASU, artist James Turrell partner on masterwork in the desert

One of the most important large-scale artworks in the world sits in the desert of northern Arizona, where artist James Turrell has spent decades shaping the landscape into an immersive observatory.

His creation, Roden Crater, is a masterwork of light and perception inside a dormant volcano, now only seen by a few hundred people every year.

A new and innovative partnership between Turrell and Arizona State University will help complete the artist’s magnum opus on the edge of the Painted Desert, making it accessible to many more people and developing an academic component for Turrell to share his artistic vision and inspire transdisciplinary approaches to creativity. The enterprise seeks to raise at least $200 million to preserve Turrell’s legacy by building infrastructure at the site, including a visitor center, and ensure conservation of one of the nation’s most renowned cultural assets.

ASU and the Skystone Foundation, a nonprofit that raises money and operates Roden Crater, are in the midst of a yearlong planning process, funded by an anonymous gift of $1.8 million, to determine the scope of the project and pilot academic programs. An online course is now being developed with Turrell, and four lab courses are under way this spring in which ASU students will visit the site.

Turrell’s work at Roden Crater is a fusion of art, engineering, astronomy, architecture and neuroscience, and that approach is a natural fit with ASU, according to Steven Tepper, dean of the Herberger Institute for Design and the Arts.

“This one project is one of the best examples of an interdisciplinary exploration that we have,” he said.

“It’s a remarkable artistic and aesthetic expression, a remarkable feat of engineering, a remarkably reflective and contemplative space in a world that seems to be very hurried. It takes you out of your normal routine and puts you into a transformational space to experience the world.”

Tepper, who is helping lead the yearlong planning process, said that when completed, the project will be the first significant academic enterprise built around a singular piece of art.

“We saw all the ways it could connect with so many of our disciplines: sustainability, archeology, geology, astronomy, tourism, landscape architecture,” he said.

The project evolved after Turrell invited ASU President Michael Crow to the site last year to discuss a partnership. Michael Govan, president of the Skystone Foundation, is the director of the Los Angeles County Museum of Art. Last year, ASU entered into a partnership with LACMA to increase diversity among museum professionals.

Tepper said that Turrell is interested in accelerating completion of his project, creating new opportunities for teaching and learning, and ensuring access for future generations of visitors. The goal is for the ASU Foundation, the nonprofit fundraising unit of ASU, to help raise at least $200 million over the next two years to complete the artistic vision within the crater and to build the infrastructure to support visitors within the next five years.

The site, which is about a half-hour drive from Flagstaff, is on a dirt road and is currently accessible only to invited visitors. Inside the crater, which is a volcanic cinder cone, those visitors have a chance to experience a number of tunnels, rooms and spaces that are mind-altering in their impact.

“It’s been designed to the quarter inch, with each of the 23 spaces envisioned with full awareness of how it’s physically oriented to the cosmos and what is trying to be captured,” Tepper said.

Turrell, 75, who was born in California, is a pilot. He spent years flying around the Southwest to find the perfect site for his project and bought the site in the volcanic field near Sunset Crater in the late 1970s. He has been working on it ever since.

One of the installations at Roden Crater is a 900-foot-long tunnel that acts as a pinhole camera that visitors walk through. The experience is “mind-bending,” according to Kelly Fielder, a master’s degree student in the youth theater program in the Herberger Institute. She was among a handful of students who visited the site last fall in the inaugural lab class.

“I wish more words existed so I could use them to convey what it’s like,” she said.

“You’re walking along this really long tunnel and finally you reach this moment when you realize that you’ve been looking at the sky the whole time but you didn’t understand that until you reach a certain point. For me, it was almost a spiritual experience.”

In another viewing experience, visitors lie down to view the rim of the crater and then gaze upward.

“And then, you start to perceive the sky the way it actually exists and not the way our mind interprets it and you realize the sky is really a big oval on top of you,” Fielder said.

The true experience of Roden Crater is not so much the earth, the structures or the architectural interventions James has created inside, according to Olga Viso, a senior adviser to Tepper who is the liaison between ASU and the Skystone Foundation. She is a renowned independent curator and arts consultant who has known Turrell for years.

“As James likes to say, the work is really about you seeing yourself seeing,” she said.

“He’s creating conditions that allow you to pause, to sense, to isolate specific experiences like understanding the amplification of your own voice or of tracing the path or arc of the sun or moon across the landscape.”

Viso said that one of the planned installations will be a spherical space that, at certain times of the day, will project the adjacent Painted Desert into the crater, bringing this breathtaking exterior landscape inside and into the viewer’s field of perception.

“The class was all about finding the intersection between volcanic sciences and art and blending those to create a showcase performance that we will be performing in February,” Fielder said. “It was an interesting experience in combining different areas of art and science.”

That’s the kind of innovative collaboration that Roden Crater will inspire, Tepper said.

“That’s why James is interested in working with ASU — he wants this artwork to not be exclusive but to be generative of ideas and open to people who otherwise might not experience it, and open to people in other fields,” he said.

“He’s said it’s a fantastic learning experience for him at this point in his life,” she said. “Working closely with an academic institution and with students is pushing him into areas of inquiry that he hadn’t anticipated. That’s both overwhelming and exciting.”

Viso is involved in working out details of what the site might look like, with a visitor and discovery center that educates participants on Turrell’s body of work as well as the volcanic, geologic and human history of the region. She said the hope is that Roden Crater will also boost tourism and provide economic development opportunities in the area, drawing visitors from around the world.

One of the field lab classes under way this semester is called “Indigenous Stories and Sky Science,” which is significant because the crater is located in the ancestral homelands of a variety of indigenous groups, including the Hopi and Navajo peoples. The course is taught by Wanda Dalla Costa, Institute Professor in the Herberger Institute, an architect and a member of the Saddle Lake First Nation in Alberta, Canada.

“James Turrell is one of the masters who’s not an architect but is an influential figure in architecture because it’s all about the perception, which is what we’re aiming to create in the best-case scenario,” she said.

“He’s very interested in seeing where the synergies are between what he’s done with light and perception and land art and the indigenous worldview.”

Dalla Costa teaches through an indigenous lens, which means collaborating with people from the local community. Her course will include talks by a Navajo math professor who teaches about the Navajo science of astronomy and an archeologist who is from the Hopi reservation, among others.

“They will help us navigate and mediate those sensitive cultural-knowledge boundaries, because it’s really important for me to get this right,” she said.

“We’ll ask ourselves, ‘Whose story is this, and how do we make it have value for the community?’”

Like all the field labs, her class will visit Roden Crater, but to give context, she’ll take the class to other locations in the Navajo and Hopi communities as well. The work will culminate in an exhibition.

While completion of Roden Crater is likely several years away, Viso said that this is a good time for the ASU community to be reminded of the power of Turrell’s work by visiting “Air Apparent,” just northeast of Interdisciplinary Science and Technology Building 4 on the Tempe campus. The work, part of Turrell’s Skyspace series, was installed in 2012 and is open to the public 24 hours a day.

“Air Apparent” is best enjoyed at sunrise and sunset, when the changing effects of light can be observed over time, Viso said.

“James is trying to show us that the sky, the earth, humanity and everything around us are in a constant state of evolution and transformation.”