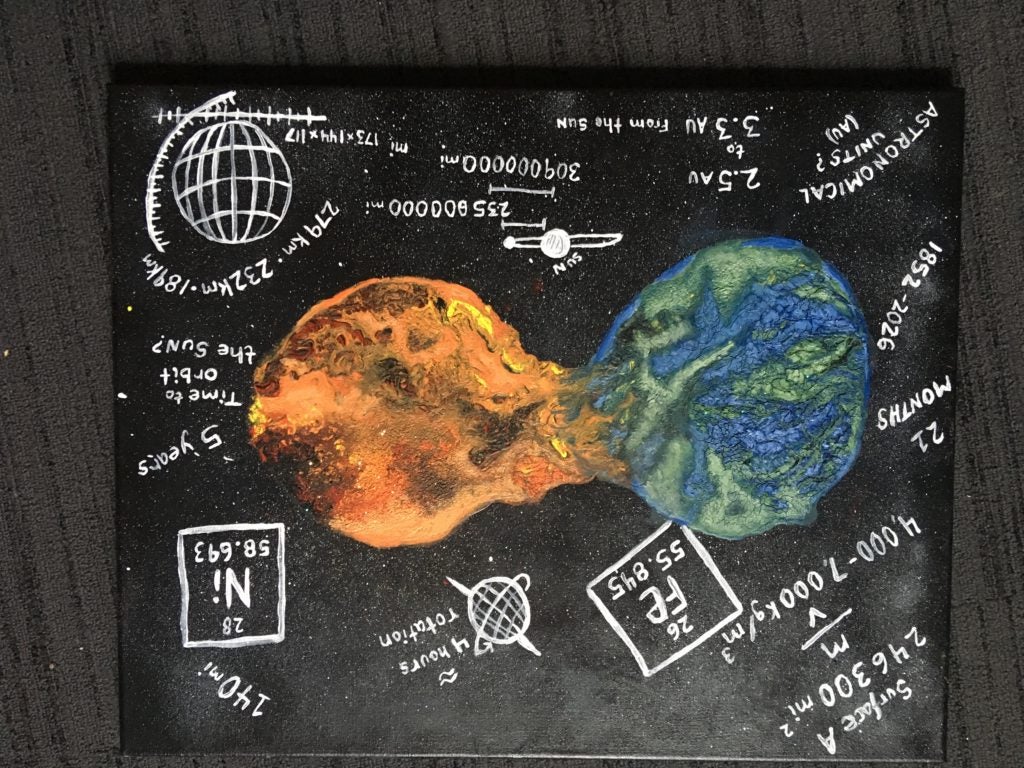 While scientists and engineers are essential to the success of a space mission, artists also play an increasingly pivotal role, providing a vital connection between the public and the mission. This connection is being taken to new levels with the NASA Psyche mission’s “Psyche Inspired” program, led by Arizona State University.

Through this program, the Psyche mission team has created a way to integrate art and science through a creative internship program that focuses on the Psyche mission, a NASA space mission to a unique metal asteroid of the same name. The Psyche Inspired program is open to undergraduates nationwide pursuing any major. Students selected for the program have the freedom to collaborate and explore different genres and mediums, as long as the subject of their work is focused on an aspect of the Psyche mission.

“Psyche Inspired is unique because it really is for everyone,” said Psyche Inspired student manager Brooke Owen, who is studying biology at ASU. “It has challenged students from different backgrounds and majors to create original works that explain complex topics. Then, those original works become great outreach tools that allow the public to understand, and feel more connected to, the Psyche mission and space exploration as a whole.”

“I am most excited about getting to try out new things and see what my peers who aren’t art majors create,” said Psyche Inspired intern Anna Vanderberg, who is an art and design major at the University of Michigan. “A really cool aspect of the program is that not all the interns are art majors, and they are all being challenged to create an artistic work.”

The diversity in majors also allows for different perspectives and ideas to be presented through art, something that appeals to Miguel Montanez, an interdisciplinary studies major at ASU. “I have a passion for storytelling and space,” Montanez said. “This is a way to explore visually and inform others about the mission.”

Interns selected for the program are required to complete two artworks per semester that will be displayed on the Psyche mission website, on social media and at an annual Psyche Inspired showcase held on ASU’s Tempe campus and streamed live.

To stay in touch, there are weekly videoconference meetings where interns provide updates on their projects, bounce ideas off one another and have guest speakers talk about the mission. Interns also communicate regularly through the messaging app Slack to ask questions or read announcements.

“The program is teaching me how to effectively communicate the main points of the mission through art,” said Psyche Inspired intern Jessika Raisor, an animation major at the Columbus College of Art and Design.

Psyche Inspired also allows students to experiment with mediums they are unfamiliar with and expand their talents.

“I gained a lot of confidence within Psyche Inspired,” said Brianna Orrill, who was in the program last year and who now works on the mission team. “As an astrobiology and microbiology major, I almost didn’t apply because I didn't think I was anywhere near good enough to make it into the program, but once I made it in I realized that everyone was learning just as much as I was.”

The Psyche spacecraft is planned to launch in August 2022 and travel to the asteroid using solar-electric (low-thrust) propulsion. After flying by Mars in 2023 for a gravity assist, the spacecraft will arrive at Psyche in 2026 and spend 21 months orbiting the asteroid, mapping it, and studying its properties.

The scientific goals of the Psyche mission are to understand the building blocks of planet formation and explore first-hand a wholly new and unexplored type of world. The mission team seeks to determine whether Psyche is the core of an early planet, how old it is, whether it formed in similar ways to the Earth's core, and what its surface is like.

The spacecraft's instrument payload will include a magnetometer, a multispectral imager and a gamma ray and neutron spectrometer. The mission will also test a sophisticated new laser communications technology, called Deep Space Optical Communications.

The mission is led by Arizona State University. NASA’s Jet Propulsion Laboratory is responsible for the mission’s overall management, system engineering, integration and test and mission operations. The spacecraft’s solar-electric propulsion chassis will be built by SSL.