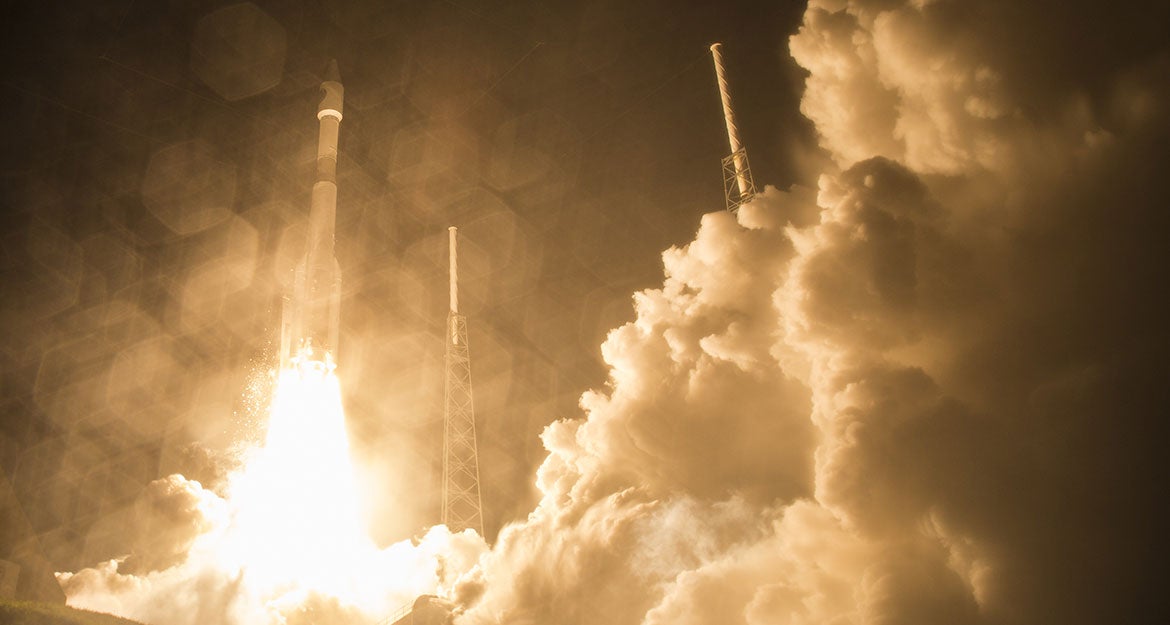 Space is daunting in its enormity and tantalizing in its mysteries, and missions to explore those mysteries are audacious and ambitious. They are also expensive.

Traditionally, governments lead most space science missions. But due to limited budgets, many good ideas never get off the ground. In fact, for every 10 missions proposed to NASA, only one is selected to proceed.

A new model is needed to increase accessibility to space science. The MILO Institute is answering that call.

Through the institute, Arizona State University, Lockheed Martin and GEOshare are pioneering a new way to fund deep-space missions that help us better understand not only our universe, but also ourselves.

The MILO Institute takes a new approach to advancing space science. Through a consortium model, universities, industries and space agencies around the globe are able to become members of the institute. The members split the cost of the missions, allowing more access to space by making it more affordable.

Membership will be available at different levels. For example, some entities might pay more to acquire space in the satellites for their own instruments, such as cameras or other sensors. Other, possibly smaller or emerging organizations, could buy in at a lower level of membership and still have access to the expertise within the institute. Every member will have access to the all data collected from each mission.

Lockheed Martin has an extensive history delivering aerospace, defense, security and other technology to military, intelligence, civil and commercial customers. It has been building planetary science spacecraft for more than four decades and has produced more than all other U.S. companies combined.

GEOshare is a subsidiary of Lockheed Martin, focused on delivering custom payloads to specific orbital locations. GEOshare provides a suite of services, from matching customer payload missions with orbital locations to facilitating construction and launch.

The idea for the MILO institute began with serial space entrepreneur Lon Levin and planetary scientist and ASU Professor Jim Bell. Levin is the president and CEO of GEOshare and has over 30 years of experience developing new space ventures. Bell is a professor in ASU's School of Earth and Space Exploration, director of ASU's Space Technology and Science (NewSpace) Initiative and chief scientist for the MILO Institute.

They are both on the board of the Planetary Society and shared a common frustration with the current funding model for space science. Bell introduced Levin to ASU President Michael Crow, and they decided ASU was the perfect place to try out a new business model to expand access and ability to do more space science.

ASU, with its strong space program and focus on outreach and education, will serve as the MILO Institute’s headquarters. Bell says that ASU is well positioned to be a leader in this field because of “the scientific pedigree that we’ve got here. We’ve been involved in almost every NASA robotic space mission going back to the 1960s. We know what good science is, we know how to do good science, and we know how to work with instruments and spacecraft.”

According to Bell, the “entrepreneurial spirit that infuses everything” at ASU positively places the university as a leading force. Lockheed Martin will provide proven technical expertise and products for the institute. And GEOshare will assist with assembling the consortium and developing the business model.

The name for the MILO Institute comes from a play on “Venus de Milo.”

“In our early days, we needed a code word for the project,” said Levin. “We were working on a potential Venus mission, and chose MILO because of the famous sculpture.”

The name inadvertently turned out to represent what the institute stands for.

“Traditionally, missions to the planet Venus are difficult and often fall just below the cutline of NASA funded missions,” said Betsy Cantwell, CEO of the Arizona State University Research Enterprise and chair of the MILO Institute board of directors. “When the most recent mission led by ASU, Psyche, won funding from NASA, a compelling mission to Venus lost. Sometimes great ideas cannot be funded through traditional channels, and that is precisely the purpose of the MILO Institute.”

“There's a proliferation of space agencies around the world, and why is that? That’s because different countries, big and small, are seeing that being a part of the space economy is important for their own economy,” Levin said.

“There's a rapidly growing number of space agencies around the world. Universities have programs and departments that are focused on space,” added Thomas. “Each one supports growth of the ecosystem around the space market. All are eager to fly their technology into space and demonstrate their capability to the world. The MILO Institute offers that opportunity in an inclusive way.”

When designing its first mission, the institute considered four key focus points. The first was partner participation — allowing many partners to participate. The next was that the mission should be conducted relatively quickly, meaning less than three to five years to validate the concept. This requires the inaugural mission to stay in the inner solar system, close to Earth.

The third factor was that the mission has to be affordable, with a total cost of about $200 million to $250 million, so that the contribution from any one of the anticipated 20 to 40 member organizations would be as affordable as possible. And the last was that the science had to be compelling, as defined by consensus reports like the National Academy of Science's Planetary Decadal Survey.

The MILO Institute’s first scheduled mission, slated for a launch in early 2023, is called NEOShare. NEO stands for “near earth object,” as asteroids that come close to the Earth will be the focus of the mission.

“There’s an alphabet soup of asteroids out there. There are dozens of types, and we’ve visited only six,” Bell said. They are designing a mission that could focus on many kinds of asteroids that have never been seen up close before.

“I think we’re in an environment where we have to think differently,” said Lisa Callahan, vice president and general manager for Commercial Civil Space at Lockheed Martin. “The way we’ve done things in the past has a lot of value in terms of the mission success, but we’re also trying to explore and experiment with different types of business models and different types of relationships. Space science is a difficult place, and I think this just helps to build more relationships to help all of us be successful — ‘a rising tide lifts all boats.’”

The collaboration between ASU, Lockheed Martin and GEOshare will engage globally and increase the capacity for space science research.

“That’s one of the most exciting things that we get to deliver and talk about is a globally sourced education initiative that delivers deep-space missions,” Cantwell said. “Then, all of those entities get to work on the science data that comes back from that.”

“There are a lot of really interesting ways to win as this global team,” said Cantwell.