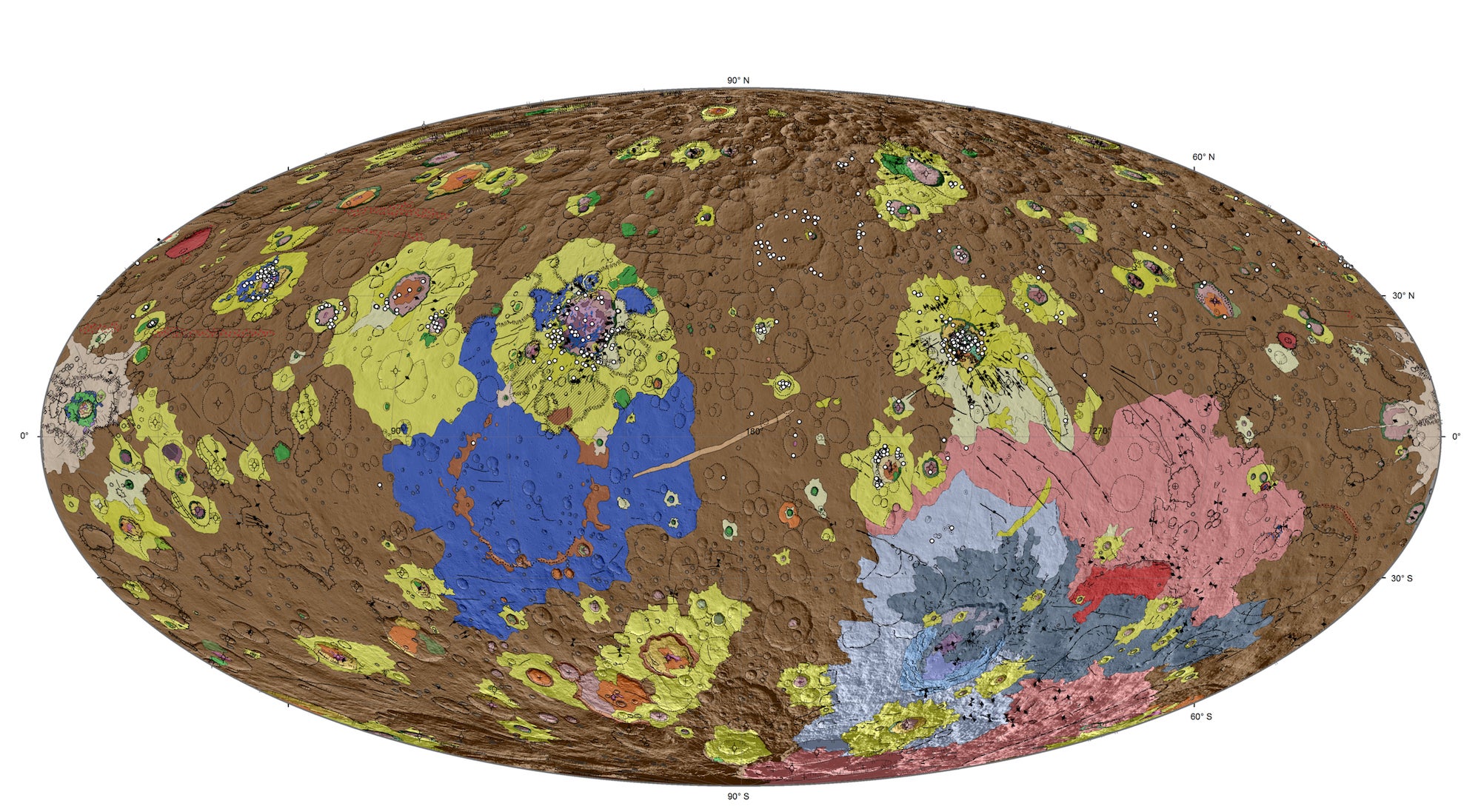 The map, published recently in the journal Icarus, shows a world that appears both old and young in geological terms. It may even be active currently.

"Ceres showed us a heavily cratered surface overall, but some features appear quite young," said Williams, a research professor in ASU's School of Earth and Space Exploration and director of its Ronald Greeley Center for Planetary Studies.

Scientists count numbers of craters as a gauge of relative age — the more craters in an area, the older the surface. And conversely, a lack of craters on features suggests that they formed relatively recently.

"In places, the surface of Ceres is only a few millions to tens of millions of years old," he said. That qualifies as old in human terms, but it's just 1 percent (or less) of the age of the solar system, which is 4.6 billion years.

The data the scientists used to map Ceres came from NASA's Dawn asteroid mission, launched in 2007. Dawn had two targets: The first was the asteroid Vesta, explored between July 2011 and September 2012, and the second was Ceres, where Dawn arrived in March 2015. The spacecraft carried a suite of instruments including a camera, a spectrometer and a gamma-ray and neutron detector.

In all Dawn spent more than three and half years at Ceres, with the mission ending only when the spacecraft ran out of fuel on Oct. 31, 2018.

In the transition zone

Ceres travels around the sun between the orbits of Mars and Jupiter, taking 4.6 Earth years for one revolution. It lies toward the outer part of the asteroid belt at an average distance from the Sun of 2.8 astronomical units (Earth orbits at 1 a.u.).

The asteroids are small bodies that occupy a middle zone between the rocky terrestrial planets from Mars inward and the gas- and ice-giant planets that orbit farther outward. Discovered in 1801, Ceres is the largest body in the asteroid belt, but is less than 600 miles in diameter. It spins once every nine hours.

Before the Dawn mission, studies from Earth (including with the Hubble Space Telescope) had sketched a rough portrait of Ceres.

"It was dark and spherical and had a few bright spots," Williams said. "But we had no idea of the nature of Ceres' geology."

The picture became clearer, if more complex, as Dawn approached Ceres, then flew a sequence of orbital surveys at different altitudes, down to as low as 22 miles above the surface during the last phase of the mission this past summer.

"The first major discovery was that Ceres had many impact craters preserved on it," Williams said. "The original thinking had been that Ceres was mostly an icy object, and ice doesn't preserve impact craters the way rock does because the ice relaxes. So that was a surprise."

Another surprise was a comparative lack of large basins produced by the impact of big meteorites, which are common in the asteroid belt.

"As we studied the high-resolution images and fitted them together into larger mosaics," Williams explained, "we spotted large lowland areas and high-standing areas, but no really large, well-preserved impact basins such as we found on Vesta."

On Ceres, the largest recognizable impact is the Kerwan basin, 177 miles in diameter and named for the Hopi Indian spirit of the sprouting corn. This was in sharp contrast to Vesta, Dawn's first target. Vesta is only about half the size of Ceres yet it has two big impact basins near its south pole. Mapping of Ceres has now revealed the rim of an ancient impact basin, Vendemia Planitia, which was initially recognized as a large lowland area early in Dawn's mission.

Scientists now think the reason for Ceres' appearance is because it is built from a mixture of ice and rock, and has partly evolved geologically. "Its nature is more similar to Saturn's icy outer moons like Enceladus or Dione," Williams explained.

The internal heat that drove the geological evolution probably created a subsurface ocean of brine.

"At some point in its history, Ceres had a global ocean like the icy moons farther out in the solar system," Williams said. "And perhaps its surface today is the remnant of that frozen ocean, with just a couple of hot spots where activity still reaches the surface."

The warm water also acted on the rock to make clay minerals, he said. Especially significant for Ceres' history were ammonia-bearing clay minerals.

"Ammonia is not stable at Ceres' location in the solar system," Williams explained. "So either a bunch of ammonia-bearing comets slammed into Ceres — or perhaps Ceres formed in the outer solar system and moved inward."

Since then, smaller impacts have continued. And in localized places, icy volcanism, with brine taking the role of molten rock, has erupted, producing white spots and pushing up domes, much as lava can build domes on Earth.

"However," Williams said, "such activity is now very limited."

The Lucy spacecraft to Jupiter's Trojans is scheduled to launch in 2021, while the Psyche mission is slated to go the year after. SESE researchers are building an instrument for Lucy and directing the development and the science team on the Psyche mission.

With Bennu, however, the action has already begun. The mission is named OSIRIS-REx, short for Origins, Spectral Interpretation, Resource Identification, Security, Regolith Explorer. The mission, led by the University of Arizona, is designed to bring back samples of the asteroid's surface rocks, sand and dust.

SESE Regents' Professor Philip Christensen has an instrument on the spacecraft: the OSIRIS-REx Thermal Emission Spectrometer, or OTES. It has started to survey Bennu with the aim of helping mission scientists choose the best place to collect the samples.

As for future exploration of the hybrid world of Ceres, scientists are just now beginning to think about what the next mission should be.

No spacecraft is likely to return to Ceres for at least a decade. However, that gives scientists a chance to absorb what Dawn has learned, build models for Ceres' structure and evolution based on what we now know, and also compare the results from other asteroid missions

"We have to fully understand the data returned from the Dawn mission, what it's telling us about the dwarf planet as a whole body," Williams said. "Then we'll be able to design just the right spacecraft and mission to go back to Ceres."