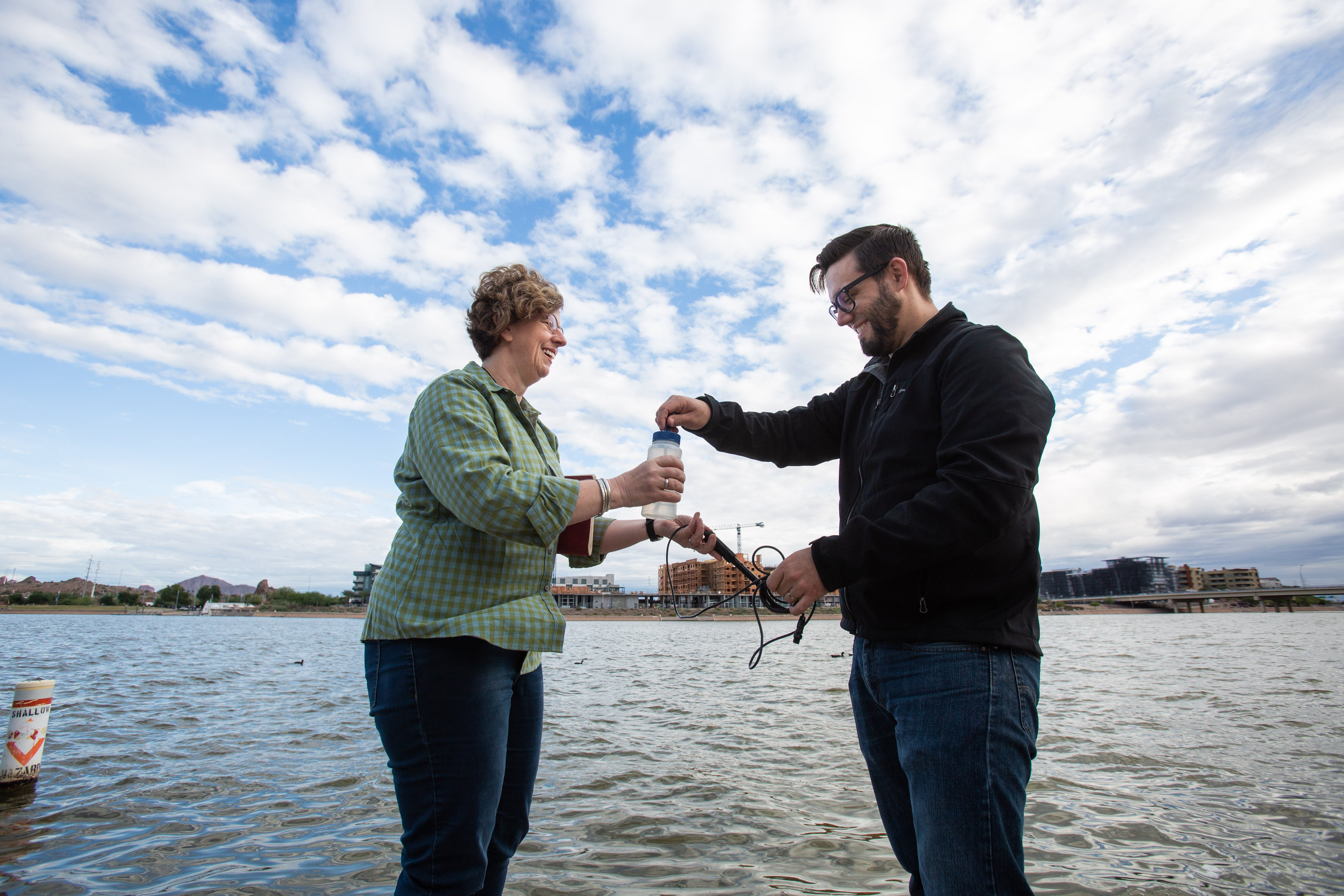 Tempe Town Lake has been a part of the city's landscape for over 19 years, and Hilairy Hartnett's lab has been measuring and collecting data there for the past 13.

With over 1,200 samples of water, Hartnett's work with the Central Arizona Phoenix Long-Term Ecological Research Program hopes to better understand what it takes to maintain the ecological health of a man-made lake in one of the hottest regions of the United States.

The associate professor in Arizona State University's School of Earth and Space Exploration and the School of Molecular Sciences spoke with ASU Now about her decade-plus sampling Tempe Town Lake.

Question: How did your lab get started monitoring the Tempe Town Lake water and what exactly do you look for?

Answer: We started sampling the lake in January 2005 when the first dam release happened; we had been studying the Verde River and the released water was coming from the Verde so we decided to take a sample. We ended up sampling every day for all of 2005. We don’t measure every day anymore; we sample twice a week and we measure water properties — temperature, pH, salinity, dissolved oxygen directly — and we collect samples for suspended sediment, dissolved organic carbon and total nitrogen. These are parameters that help us to understand biogeochemical cycling in the lake. Hilairy Hartnett holds a container of Tempe Town Lake water as she speaks with Elinor Sauer and Donald Glaser at Tempe Town Lake on Oct. 16, 2018. The water will be kept as a sample and measured for suspended sediment, dissolved organic carbon and total nitrogen. Photo by Deanna Dent/ASU Now

Q: Why is CAP interested in recording this data, and why with this frequency?

A: The Central Arizona Phoenix Long-Term Ecological Research program, or CAP-LTER is a 20-year-long (and counting) program funded by the National Science Foundation to study urban ecology. Long-term data is key to understanding how ecosystems behave and how they respond to steady changes and extreme events. This lake is important for the people in the city because it provides ecosystem services: recreation, flood control and biogeochemical cycling.

Q: What are some unique aspects to Tempe Town Lake that have come out of your research?

A: We have learned that the lake is very dynamic. The water chemistry and the carbon content and composition change on daily time scales due to algae, on seasonal time scales due to rainy seasons and dry seasons, and from year to year due to climate and to water management decisions. We know know there is carbon in the lake that is produced and consumed by plants and algae. There is also soil-derived carbon in the lake that comes in with rainstorms and from river flows. Bacteria degrade all of this carbon relatively quickly. We’ve also learned that the lake has high dissolved oxygen levels almost all of the time, which is an indicator of a healthy aquatic ecosystem.

A: I definitely get asked pretty often! The city of Tempe monitors the lake water carefully and makes sure that the water chemistry meets the EPA standards for swimming before events, but I can't say whether or not it's safe since I don't do the EPA measurements. Q: Do you see any differences in the water after storms or during the summer that don’t exist in other man-made lakes?

A: This is a good question we don’t really know the answer to. … This is the only lake we’ve studied in such detail. It would be cool to expand the study to include other lakes in the city and lakes of different sizes. We could also compare Tempe Town Lake with some of the larger reservoirs like Roosevelt Lake or Lake Pleasant.

Q: There are wetlands to the east of Tempe Town Lake — are they related to the lake itself or what’s left of the actual Salt River?

A: The answer is both, the wetlands formed as a result of the construction of the lake and they are water that comes in part from groundwater in the Salt River channel.

Q: Lastly, why does the water smell funny?

A: It doesn’t smell funny! It smells like a lake! Seriously though, it’s not a swimming pool — it isn’t controlled to be exactly the same all the time. It is not very different from any pond or small lake … the combination of algae, birds, fish, organic matter, etc. all contribute to what people perceive as a smell.