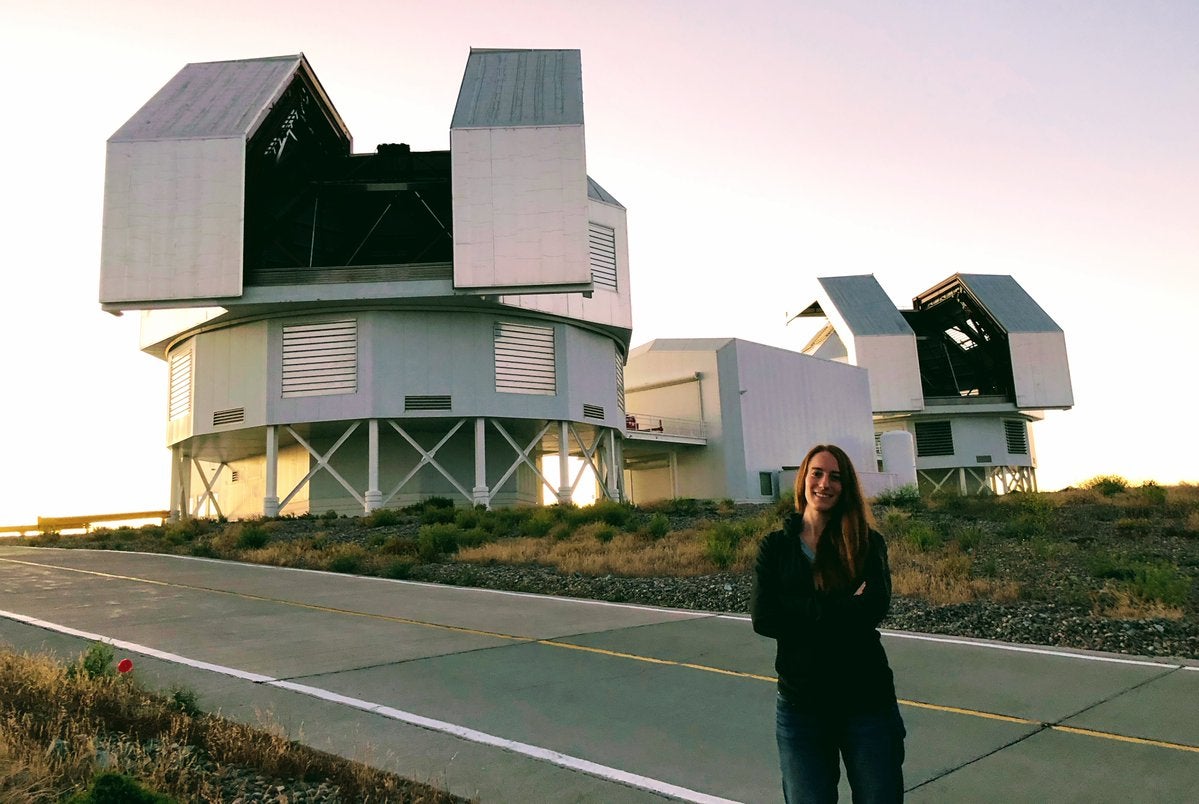 With new technology, astronomers are entering a golden age, witnessing cosmological phenomena as never before.

It’s paved the way for Nobel Prize-winning science, confirmed Einstein’s theories and — seemingly with each discovery — given scientists a new understanding of the universe.

Astronomer Maria Drout, a new tenure-track professor at the University of Toronto, has been in the midst of this revolution. She will be coming to ASU on Oct. 25 to share the excitement of this new era in a public lecture called "Astronomical Alchemy — The Origin of the Elements."

To get a slice of the science, take for example, the afternoon of Aug. 17, 2017, when Drout, working in her lab in Pasadena, California, received a message about an event that turned out to be 130 million years in the making. The text alert came from scientists working at the LIGO and Virgo observatories — very precise instruments located on Earth trying to detect gravitational waves. Already, they had made scientific history in 2015 with a Nobel Prize-winning discovery from the first detection of gravitational waves that came from a pair of colliding black holes.

That August afternoon, they had detected a new cosmic chirp, followed by a burst of gamma rays emerging from deep space. What they were witnessing was the death spiral of a neutron star merger so massive and violent that it threw ripples of gravitational waves across the universe.

Within 15 minutes of receiving their alert, Drout and other astronomers around the world raced to point telescopes at the night sky to find and capture light from the source of the waves.

“Everything just got thrown in the air because it was what everyone had been waiting for for a very long time,” Drout said. “What we knew at that point was that LIGO had detected a neutron star merger. And neutron star mergers can produce light.”

Drout and her team, using the Swope and Magellan Telescopes in Chile, quickly located it. “It was incredibly hectic; we had to analyze the data immediately so we could decide in real time what new observations to take, because it wasn’t like any explosion we had seen before.”

They saw a bright burst of light during their measurements over next few days. It came from material thrown out during the collision of the neutron stars, which created a radioactive stew of heavy elements, including more gold than all the riches on the Earth.

“By studying this light, we were able to say for the first time that these heavy elements were created as the result of a neutron star merger,” Drout said. “If LIGO hadn’t been operating, it’s very likely we would have missed it, because the explosion faded away very quickly. It’s always mind-blowing to think about. Sit back and think how 130 million years ago, these two neutron stars merged and the light has been coming toward us ever since.”

Scientists were able to witness this event — which occurred in the universe around the time when the dinosaurs roamed here on Earth — by building LIGO in the nick of time.

“And if it had happened just three weeks later, we would have never seen it: LIGO was turned off for upgrades, and that patch of sky fell below the horizon of our telescopes.”

“This event was a whirlwind. And in the future, we will know so much more from coupling together gravitational waves and light for a large number of explosions.”

Her early career and graduate work focused on observing supernovae and recording their unique bursts of light that are the telltale sign of a star’s final journey. The very first image of the light from a neutron star merger, taken from the Swope Telescope. Courtesy of Maria Drout

At the ASU lecture, she will take the audience on a journey of the unique conditions — the type of stars and their explosive deaths — that are the cosmic recipes for producing the elements in our universe, including the star stuff that went into making the Earth and each of us.

And still, it’s just the tip of the cosmic iceberg for discoveries yet to come.

“In this field, it’s going to get exciting very quickly. In February 2019, LIGO and VIRGO are going to be turning on again. We should be finding 10 or more of these type explosions per year going forward. There is still a lot of uncertainty about what is the exact contribution of these type of explosions to the total production of heavy elements in the universe. We’ll really start to move in that direction in 2019 and beyond.”

This event is sponsored by the new Interplanetary Initiative from the ASU School of Earth and Space Exploration.

Prior to the lecture, there will be a reception and light refreshments from 4:45 to 5:30 p.m. in the lobby of Interdisciplinary Science and Technology Building IV. Event registration is required.

For those unable to attend, the lecture will also be live streamed.