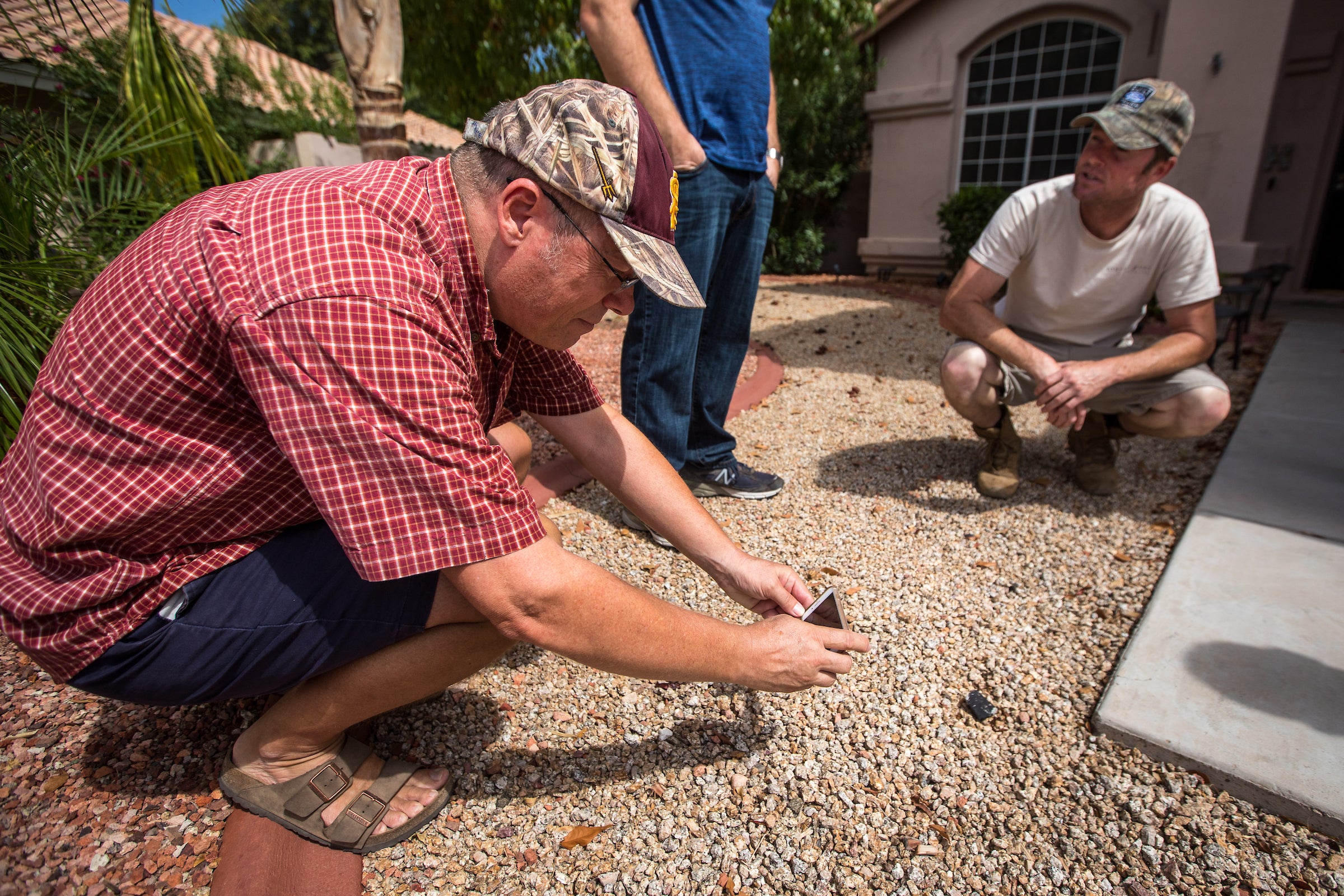 From space to suburbia

Meteorites are totems of great power. Having traversed millions of miles, they command a space in our consciousness shared only by objects like bear claws, sperm whale teeth and dinosaur skulls.

In the vernacular of meteorites, when someone sees a fireball in the sky and the stones are recovered, it’s called a fall. If a meteorite is simply found on the ground, it is called a find.

In the meteorite world, falls are much sexier.

And this summer, the Valley of the Sun had its first one ever. It was the fifth fall in Arizona history.

This is its story.

Around 8:30 p.m. on the night of July 26, a north Phoenix couple relaxed in their pool when a flash lit up the entire yard.

“It’s what made me look up,” Kay G. told the American Meteorite Society. A bright yellow fireball streaked horizontally across the sky, trailing fragments. A sound like distant thunder boomed multiple times over 60 seconds.

Eleven other people across the state, from Williams to Tucson, reported seeing the fireball.

More than 7 miles to the southwest, in a tidy cul-de-sac in Arrowhead Ranch’s Hillcrest neighborhood, a black stone fell from space, ending up on pale beige pea gravel in the front yard of a 38-year-old software engineer named Cody Horvath.

There it sat for two weeks, unnoticed until Aug. 14, when Horvath came out to move his truck into the shade, something he routinely does on hot summer days.

“I walked up to it and I thought, ‘Who threw this black rock in my yard?’” he said. “I almost chucked it into the street. Then I noticed the fusion crust. I noticed this rock had been on fire, so I texted my family and said I found a meteorite in the front yard.” Meteorite researcher Robert Ward holds the meteorite that fell on July 27. The space rock is the first meteorite fall in the Valley. Photo by Charlie Leight/ASU Now

Horvath knew Arizona State University has a meteorite collection. He stayed up that night, surfing the net. Eventually he came across a video featuring research professor Laurence Garvie, collections manager of the Center for Meteorite Studies. The center has about 2,000 different types of meteorites in its 40,000 specimen collection. It’s the world’s largest university-based collection.

It’s also a target for anyone who has picked up a strange rock and thinks they’ve found something from space. There is one day a year that the public is invited to bring in what might be a meteorite for identification. The rest of the year, the center’s doors are closed firmly, as is stated — multiple times — on every single page of the center’s website. The university’s meteorite identification program was closed seven years ago because they were overwhelmed with requests. A voicemail asking not to leave messages on the center’s line gets a few messages every day nonetheless.

Horvath emailed Garvie at 11 p.m. that night. Garvie, who was well aware of the July event, happened to be checking his emails late and replied. Horvath texted a few photos. He had the real thing.

“It’s amazing,” Garvie said. “You don’t get much better than that. … What makes this so exciting for me is that it was a ‘secret’ fall. … Here’s this amazing event in the middle of a huge metropolitan area and no one noticed (stones hitting).”

Meteorites are named after where they fell. Horvath’s meteorite will be named Glendale. “It’s wild,” he said.

Not many people would have recognized the meteorite as something special. Horvath had the eye for detail and knowledge to recognize what he found in his yard.

“He deserves amazing praise for recognizing it,” Garvie said. “This shows the importance of citizen science.” It’s a chondrite, a stony, non-metallic type of meteorite that has not been modified from melting or differentiation of the parent body. Garvie will need to conduct extensive analysis in his lab to determine what type of chondrite. It will be a year before his paper on the stone is ready for publication.

“It’s something the public knows almost nothing about,” Garvie said. “It’s a lot of work. It’s not just me eyeballing it saying, ‘It’s a whatever.’ It’s hours of work here and hours of work on microscopes and hours of work looking through boring Excel spreadsheets. Then you have to write a report and then you have to submit it to the nomenclature committee and then, assuming everything is okay, you have to publish your findings. So it’s a long, long process.”

Ward owns the world’s largest private collection of meteorites. He is now approaching 6,000 meteorite finds at almost 600 locations on six continents across the globe, including the recovery of over 20 witnessed falls. In his pursuit of recoveries, he has been shot at and was even imprisoned for two months in the Middle East.

“Man, you looked like a scarecrow when you came back from that one,” Garcia ribbed him.

The July fall was caught on several cameras across the state, as well as radar. Ward looked up the trajectory on the American Meteorite Society website. It ended about 200 feet from where Horvath found his stone.

But everyone is convinced there are more stones in the area. With multiple sonic booms, “there’s no doubt there’s more stones,” Ward said. “That’s what we want.”

The strewn field Garcia, Garvie and Ward searched is roughly 4 miles long and 2 miles wide. It covers the Hillcrest neighborhood in Arrowhead Ranch. By late last week, the trio had searched a combined total 30 miles.

However, because the fall happened at night, and not many people spend a lot of time in their backyards in the Valley in August, the experts believe the missing stones are on someone’s property, or somewhere on the grounds of the Hillcrest schools. They believe the stones will be within 2 square miles of Deer Valley Road and 75th Avenue in Glendale. Area residents should look for broken roof tiles or a hole in a solar array.

“Those roofs are thick,” Garcia said. “They could be up there.”

Ward bought the meteorite for an undisclosed amount. He donated a chunk to ASU, where it will go into the university’s collection.

And if you suspect you possess a meteorite? ASU’s Earth and Space Exploration Day will be held Oct. 13 on the Tempe campus.

Top photo: Laurence Garvie, curator of ASU's Center for Meteorite Studies, on Thursday, Aug. 16, 2018, takes a picture of the meteorite that fell in the front yard of Cody Horvath's north Glendale home on July 27. The space rock, a little larger than a golf ball, came down during a monsoon storm. Horvath saw the blackened stone in the pea gravel and was about to throw it into the street when he realized it was a meteorite. It is reported to be the fifth meteorite fall in Arizona, and the first in the Valley. Photo by Charlie Leight/ASU Now