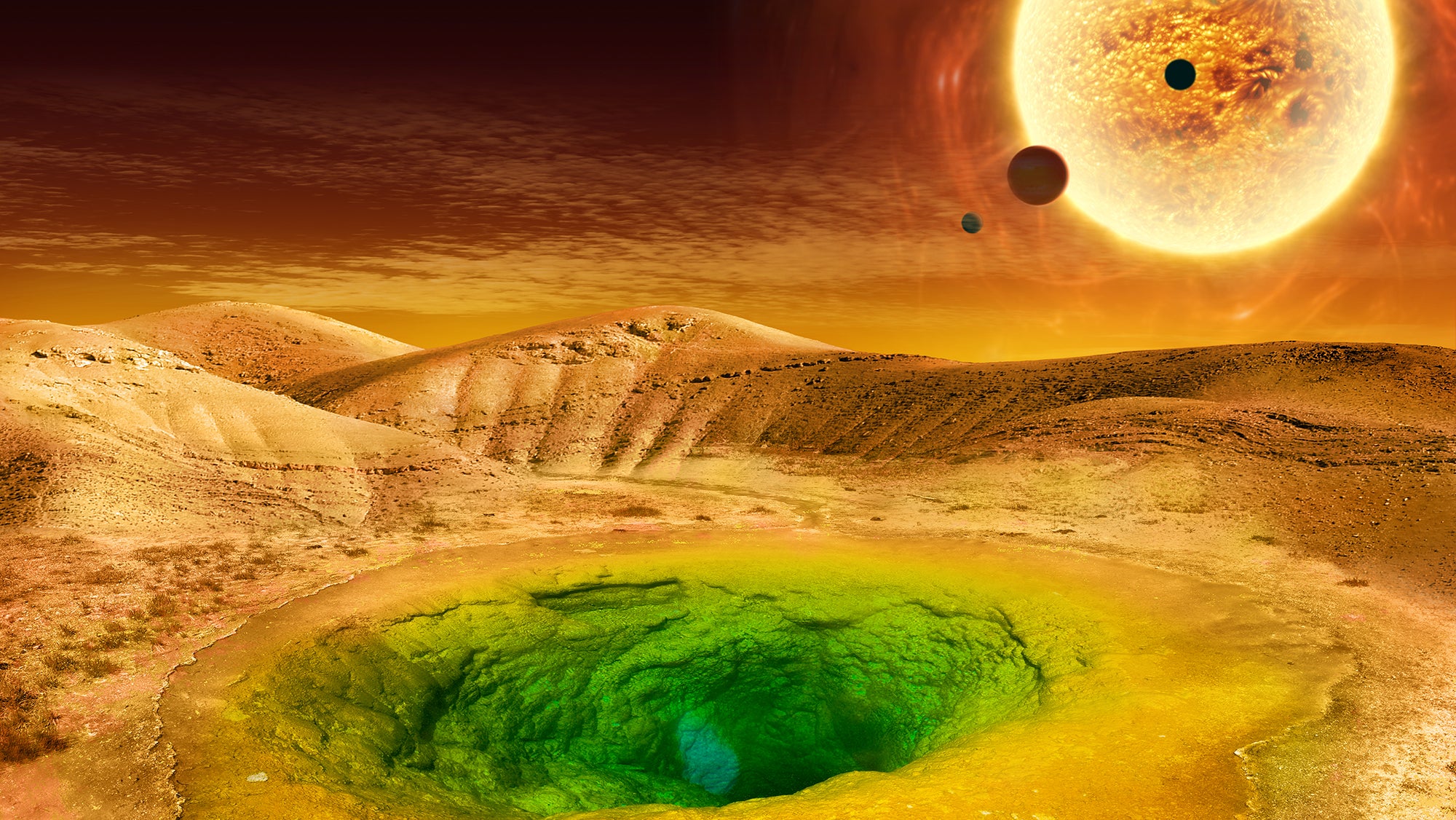 Are we alone? ASU scientists developing strategies to search for life on exoplanets

More than 3,700 exoplanets (planets around other stars) have been discovered over the past 30 years. In response to this, NASA’s Nexus for Exoplanet Systems Science (NExSS) has gathered researchers from around the world to help answer the question: “Are we alone?”

Formed by NASA three years ago, NExSS is an international network of researchers that brings a variety of disciplines together to determine how to characterize, and eventually search for, signs of life, called biosignatures, on exoplanets.

To help with this effort, NExSS has produced a comprehensive series of articles outlining the past, present and future of research on how to search for signs of life on exoplanets.

These articles are featured in a special edition of the scientific journal Astrobiology, released this month. The special edition is the result of years’ worth of work by some of the world’s leading researchers in astrobiology, planetary science, Earth science, heliophysics, astrophysics, chemistry and biology.

"Astrobiology is now a mature science. For the first time in human history we will no longer need to satisfy ourselves by merely speculating about whether or not we are alone — we are now able to test it and assign a significance level to the likelihood we are not alone," Walker said.

In their article “Exoplanet Biosignatures: A Review of Remotely Detectable Signs of Life,” contributing authors Hartnett, Walker and Fisher look to life on Earth for analog signatures that may aid in the search for life elsewhere. In particular, they suggest that Earth’s biosphere, both in the present and through geologic time, provides insights into what might be possible on other planets.

“It has been 16 years since the last review of planetary biosignatures; since that time, we’ve discovered many new ways to detect life on other planets. These range from things we can see — green plants and purple algae — to measurements of the gases living organisms produce — oxygen, methane or other trace gases,” Hartnett said. “One of the things ASU researchers are working on now is how to tell the difference between living and nonliving things when they produce similar signatures, because we will want to be pretty darn sure that we know what life looks like before we say we found it on another planet.”

In their article “Exoplanet Biosignatures: Future Directions,” contributing authors Walker, Shkolnik and Smith suggest that the large statistics of exoplanet samples orbiting a wide variety of stars, combined with the ambiguity of our understanding of universal properties of life, means that the search for biosignatures needs to expand beyond those of known life.

“By focusing on detectability instead of habitability, we avoid making assumptions about alien life, and how its needs might differ from Earth-life,” Smith said. “This is important, because we’re discovering many planets that don’t seem habitable by our standards.”

The intent of the article, say the authors, is to provide the groundwork for how the astrobiology community can move beyond the concept of habitability, so that scientists don’t rule out life on a planet just because it’s too different from life as we know it on Earth.

The authors also stress the importance of understanding the radiation environment of exoplanets as a major component of assessing its potential habitability. They caution that light from the stars the exoplanets are orbiting can make false-positive and false-negatives of biosignatures.

Both of these articles show how scientists can formalize the lessons we have learned from Earth and expand them to the wide diversity of worlds we have yet to discover.

“The data that astronomers collect on exoplanets will be relatively sparse. But by combining information we have in systematic ways and with complex models, scientists can analyze whether data from a planet can be better explained by the presence of life or the absence of it,” said Shawn Domagal-Goldman, an astrobiologist at NASA’s Goddard Space Flight Center.

A consistent theme throughout these articles is the need to consider planets in an integrated way that includes multiple disciplines and perspectives.

“Because life, planet and parent star change with time together, a biosignature is no longer a single target but a suite of system traits,” said Nancy Kiang, a biometeorologist at NASA’s Goddard Institute for Space Studies. “More biologists and geologists are needed to direct how to interpret observations where life processes will be adapted to the particular environmental context.”

Other articles in this special edition focus on the types of signatures that astrobiologists have used to identify life on an exoplanet (namely gases and light), the ways nature could “trick” scientists into thinking a planet without life was alive, or vice versa, and a discussion on the telescopes that will assist in the search for life beyond our solar system, including ground-based and space-based telescopes.

“Being able to infer the presence of life from a single point of light is no easy feat,” contributing author Fisher said. “Given the massive implications of detecting an alien biosphere on an exoplanet, we're going to need all the tools in the toolbox to build up a sufficient level of confidence in our findings. Some of the most exciting research featured in these papers focuses on radically new techniques, like applying methods from complex systems science and network theory to biosignature detection, that will hopefully make this problem a little easier to tackle.”

It is the hope of the contributing scientists that, by 2030, we have the technology and knowledge to detect atmospheric signatures of a few potentially habitable planets.

“I’m excited to see how this research progresses over the coming decades,” Domagal-Goldman said. “NExSS has created a diverse network of scientists that will allow the community to more rigorously assess planets for biosignatures than would have otherwise been possible.”

Top image: An artist’s conception of what life could look like on the surface of a distant planet. Image by NASA