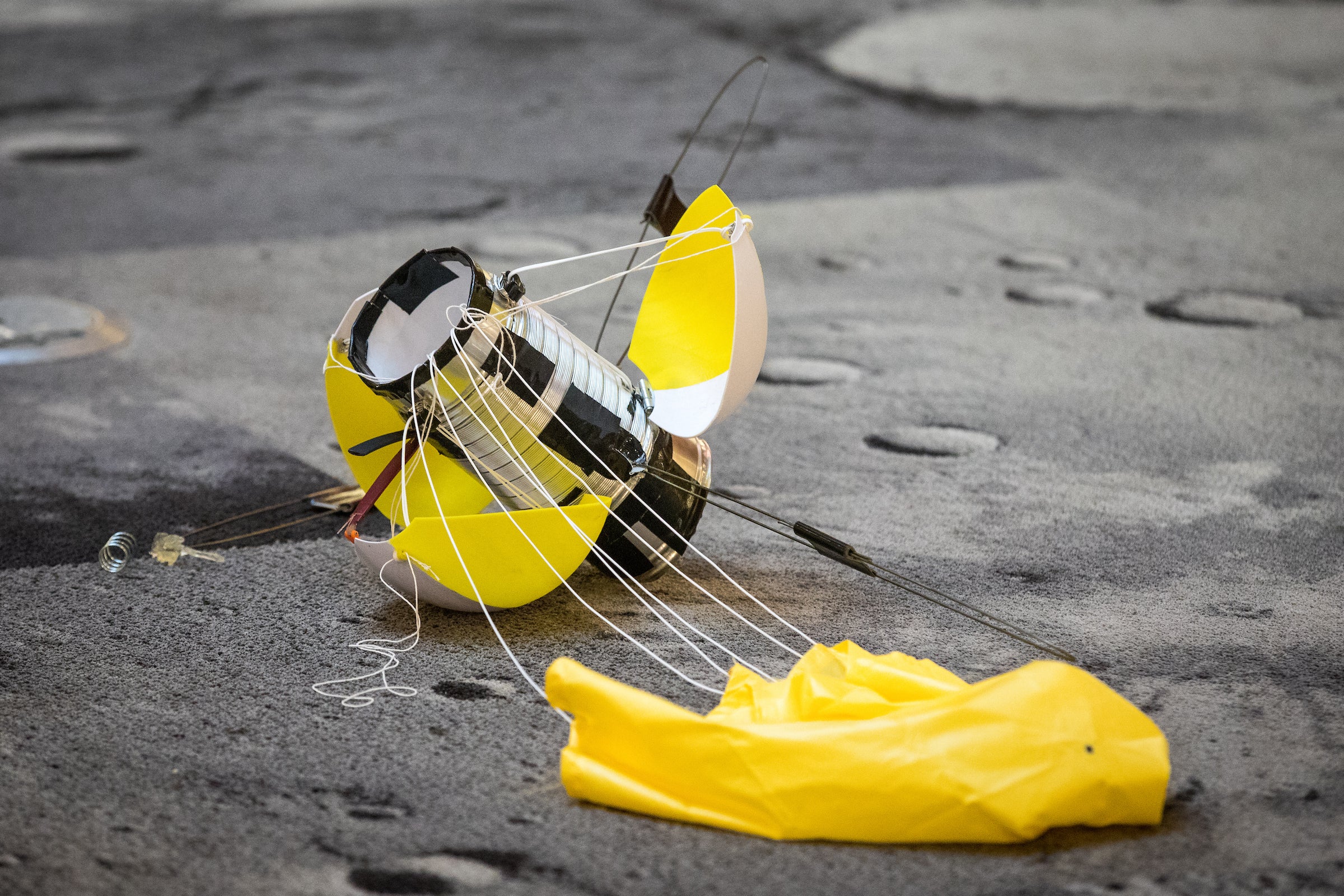 Members of SpaceWorks 1 class learn from their mistakes

The list of what can go (and has gone) wrong in space is a long one, as students in Arizona State University’s School of Earth and Space Exploration’s SpaceWorks 1 class can now tell you.

Taught by NASA veteran and Regents’ Professor Phil Christensen, the class teaches students how space scientists and engineers work in the real world to explore the solar system. Skills like meeting NASA mission development timelines and knowing what program managers and manufacturing engineers do will smooth their entry into the field.

A month ago, student teams launched landing craft from the sixth-floor balcony of the ISTB4 atrium. The landers were all built under design restrictions: They had to drop a payload, have it safely land in one piece on a target, and then deploy something. There was a weight restriction of 500 grams for the whole package, and it couldn't have any power.

In the first round, most of the landers made it to the ground intact. There were a few crashes, but a few deployments too. During the final round on April 25, the landers were bigger and more elaborate — and more disaster-prone. “But it worked in testing” became the evening’s mantra.

The first team to launch had a nice, soft landing, but it was so far off course it didn't even hit ISTB4's moon carpet, let alone the target. The second lander crashed spectacularly, spraying parts across the floor. What went down as a carefully engineered lander came back as a cardboard box full of parts. Alexander Elledge (left), freshman in astrophysics, and Regents' Professor Phil Christensen look at the "Lander Calrissian" module after its fall April 25. The strings got tangled, preventing the two chutes from properly deploying. Students will write reviews of their projects — successes and failures — as part of their final grades. Photo by Charlie Leight/ASU Now

Richard Lindeman, a continuing student studying astrophysics, watched glumly from the sixth floor. He blamed launching from a bouncing wire as the reason for his team’s epic wreck. Originally they were told they’d launch from a rigid arm, he said.

“With our design our parachute is tied up,” Lindeman said. “It deploys by a zip line attached to the string. The bouncing motion tangles the strings up.”

The lander tested fine, he swore. He held his phone out, showing video of a successful launch off the roof of a house to anyone who would watch. The craft was supposed to retract the parachute upon landing.

“It’s pretty cool,” he said. “It was working good in testing. The parachute didn’t deploy at all this time, so it fell to its death.”

Lindeman shook his head. “All that work, gone in three seconds.”

How much work? Four or five iterations in the engineering program SolidWorks, three 3D prints, eight hours machining weight from the skids, and endless testing, not to mention all the time Lindeman, a stranger to needle and thimble, spent sewing the parachute.

Throughout the class Christensen told students about a litany of disasters in space exploration, of which there are many, like the Soviet Venus probe that landed, popped off a protective shield, extended a sampling arm and promptly put the instrument onto the shield (not the planet).

Lindeman has taken classes with Christensen before.

“It’s just really fun working with him,” he said. “Even though it’s not directly related to the core stuff I’m working on, it’s fun to take part in it.” A planetary lander, built by Nathanael Mains, junior in astrophysics, and Michael Garland, sophomore in aerospace astronautics, begins its fall to the floor April 25. Photo by Charlie Leight/ASU Now

What Lindeman and the rest of the class learned is that engineering and science are learning processes, Christensen said.

“The purpose of this class was to provide students real opportunities to try out ideas, make mistakes and learn from them,” Christensen said. “Most groups changed their designs, and in many cases that created new problems — like their landers being too heavy. I’m sure that if they had one more try, most of these landers would have worked very well."

Not all failed. Nathanael Mains, a junior majoring in astrophysics, and Michael Garland, a sophomore majoring in aerospace astronautics, watched in triumph as their craft wafted gently down on target.

“It was good,” Mains said. “It was what we expected. Our deployment was fine.”

“We tried to keep it small and simple,” Garland said. Their launch a month before was unsuccessful. They discovered their parachute strings were uneven and too short. By lengthening the strings and keeping them uniform, the chute deployed and the lander wafted to the ground.

Top photo: Despite its soft landing, the planetary lander built by Garrett Nez, senior in aerospace engineering and astronautics, and Victoria Froh, freshman in earth and space exploration and chemistry, still lost one of its legs during the lander drop in Regents' Professor Phil Christensen's SES 394 Special Topics course April 25 in ISTB4 on the Tempe campus. Twelve teams created modules that would fall three floors, deploy a controlled landing device and land on a mat on the impact-crater carpet. This is the second and final iteration of the modules, following the previous drop a month ago. Photo by Charlie Leight/ASU Now