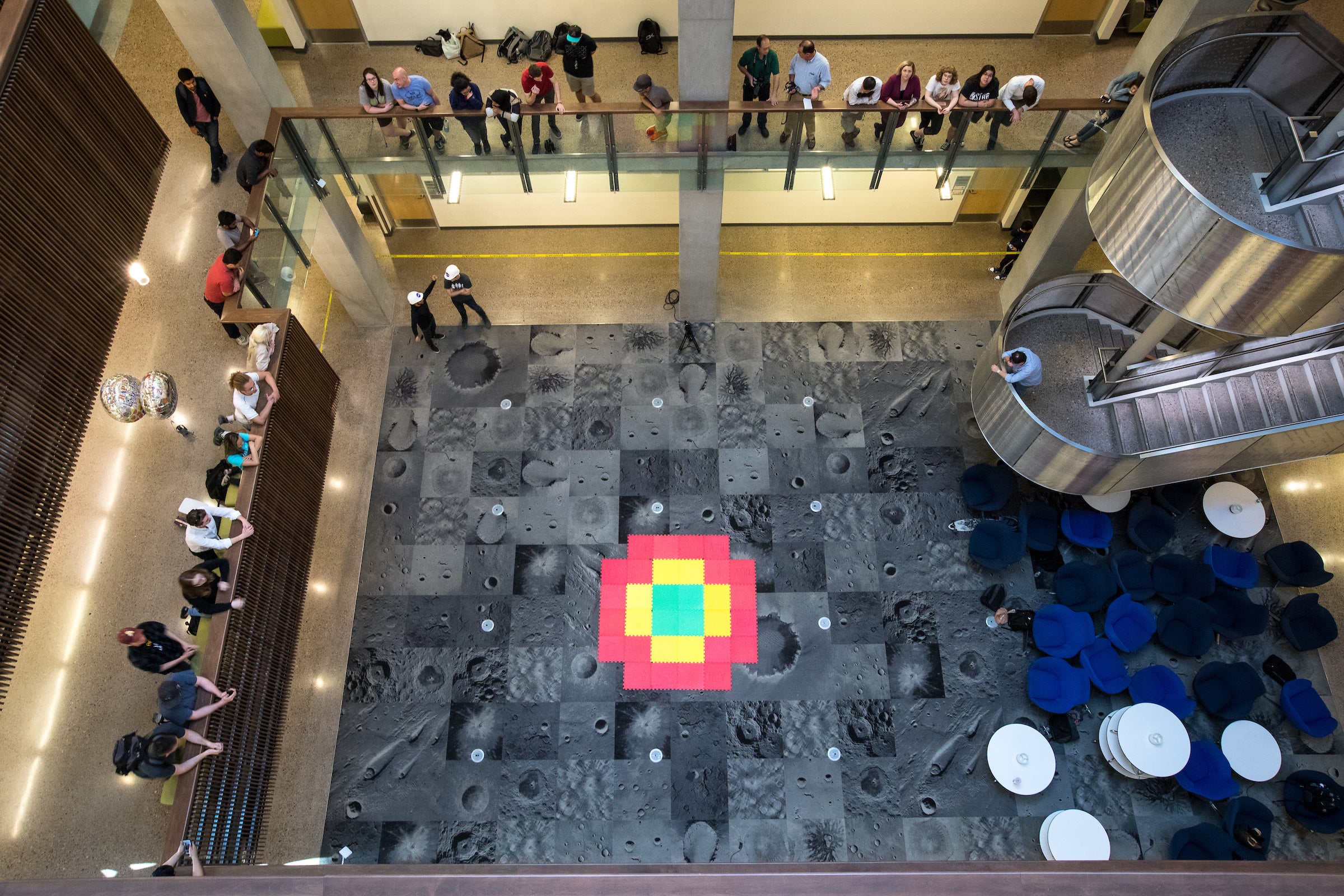 Putting the steel in steely-eyed missile men and women

One by one during the class, strange crafts fall from the sky. They look like badminton shuttlecocks, restaurant roll baskets, or aluminum Jiffy Pop domes. They land softly or hard, sometimes spraying parts, sometimes missing the target.

None of them are missing the point, however, which is learning how space scientists and engineers work in the real world to explore the solar system.

This is SpaceWorks 1, being taught in Arizona State University’s School of Earth and Space Exploration.

“I’m trying to get them to think like engineers,” said class instructor Phil Christensen, no stranger to things that fall from the sky and then have to work perfectly. Christensen, a Regents' Professor and NASA veteran, has instruments peering into various corners of the solar system.

The students are budding astrobiologists, systems designers and aerospace engineers. Their challenge? Drop a payload, have it safely land in one piece on a foam pad, and then deploy something. There’s a weight restriction: 500 grams for the whole package. It can’t have any power. And all this has to be done on a strict schedule.

Today is the first test. After this class, each team has to go before a Failure Review Board and explain what went wrong and how they’re going to fix it.

Christensen stands at the railing on the fifth floor of the atrium inside Interdisciplinary Science and Technology Building IV on the Tempe campus. “There’s a reason people still die jumping out of planes with parachutes,” he said. “They rip, they tear, they don’t deploy.”

It took years — years — to perfect the parachutes that dropped the rovers to the Martian surface. They ripped. They tore. They didn’t deploy.

“Cameras are ready,” Christensen said. “Lights are ready. We just need some action.”

It’s go time for Team 12. Their craft looks like a big blue badminton shuttlecock. It lands top-up with some tethered orange balls flying out to the side.

The next craft is much larger, made of clear plastic panels and orange plastic parts. It misses the target, but a black parachute deploys quickly and it lands softly.

Team 10 has taken the classic approach. Their machine looks like the Apollo lunar module, with legs jutting from the sides. In NASA parlance, it has heritage; it’s a design or system that has flown before successfully. NASA likes heritage. They don’t like reinventing the wheel.

But the parachute doesn’t deploy too well from Team 10's module. It inflates as much as a tube sock would. Landing is rough. A leg breaks off.

Next up: This one looks like a restaurant roll basket with a maroon napkin hiding something unpleasant in it. Landing is accurate, but not up to commercial aviation comfort standards.

Rachel Roland breathes a sigh of relief. Roland, earning a second degree in astrobiology, signed up for the class to get some experience cross-training in engineering. Should she ever take part in a mission to Europa or Enceladus as she hopes, it could come in handy.

“I think it’s really important as a scientist to understand what the engineers do,” she said. “If I ever want to be a part of a project that will go into space, I need to know how this works. I think it’s really cool and I’m actually having fun learning about engineering. … Getting to see my project work was actually a bonus.”

The students didn’t get any hints or ideas from instructors. “Go be creative” was the extent of direction.

“It’s been really fun to watch,” Christensen said. “They’ve had to work in groups, which students hate, but we told them that’s the real world. They had to learn how to machine things. They had to go through reviews. They had to turn in a schedule. They actually had to live under a budget. We were trying to teach them real-world professional engineering skills, but let them have some fun at the same time.”

Whether they become scientists or engineers, they’ll need to know how to work like this to be successful at places like SpaceX or Orbital ATK. Working engineers from the space field talk to the class about their jobs. The students learn about what programs engineers use, and they get clean-room and machine-shop training.

“All of these skills will be very important when we actually go into the industry,” said David Madden, a freshman majoring in aerospace engineering (astronautics). He plans to go to grad school after earning his bachelor’s degree.

They won’t panic when they hear the words “critical design review,” Christensen said.

“(Co-instructor) Sheri Boonstra and I are trying to professionalize these students, so when they go out into the world and work for NASA or SpaceX or whatever, they’ve done this kind of thing before,” he said. “They can say, ‘Yeah, I can work in a team, and I know what a milestone is and I know what it means to have a schedule I have to stick to.’ The stuff they learn in classes is fantastic, but applying that in a real-world kind of way is what we’re trying to do here.”

Boonstra said that’s what NASA and the industry has told her directly.

“They’ll be able to take their degree and work directly in the space industry,” she said. “We’re mapping our activities in this class to what industry and NASA has been telling us, ‘These are the top things we need them to be good at.’ Those are the things that are embedded in this course.”

The space industry wants engineers and scientists who can hit the ground running. Part of the class is learning the business’s specialized vocabulary.

So how did they do at the end of the day?

“I came in here today fully expecting all of these projects to fail,” Christensen said. “I was stunned and amazed when things went as well as they did today. I’d say about half of them pretty much did what they were intended to do, and the others came close. That’s a sign these students have taken this seriously, they’re enjoying it, they’re really putting their energy into it. They did their homework when they showed up today.”

Visitors are invited to attend the second round of the class' payload drops to see how the 12 teams do. It’s in the atrium (third through seventh floors) of ISTB4 at 781 S. Terrace Road in Tempe. The class runs from 5:30 to 7:30 p.m. Wednesday, April 25. No admission fee.

Top photo: Twelve teams created modules that would fall 30 feet, deploy a controlled landing device, land on a mat on the impact crater carpet, and then follow that up with a NASA-like failure design review. Photo by Charlie Leight/ASU Now