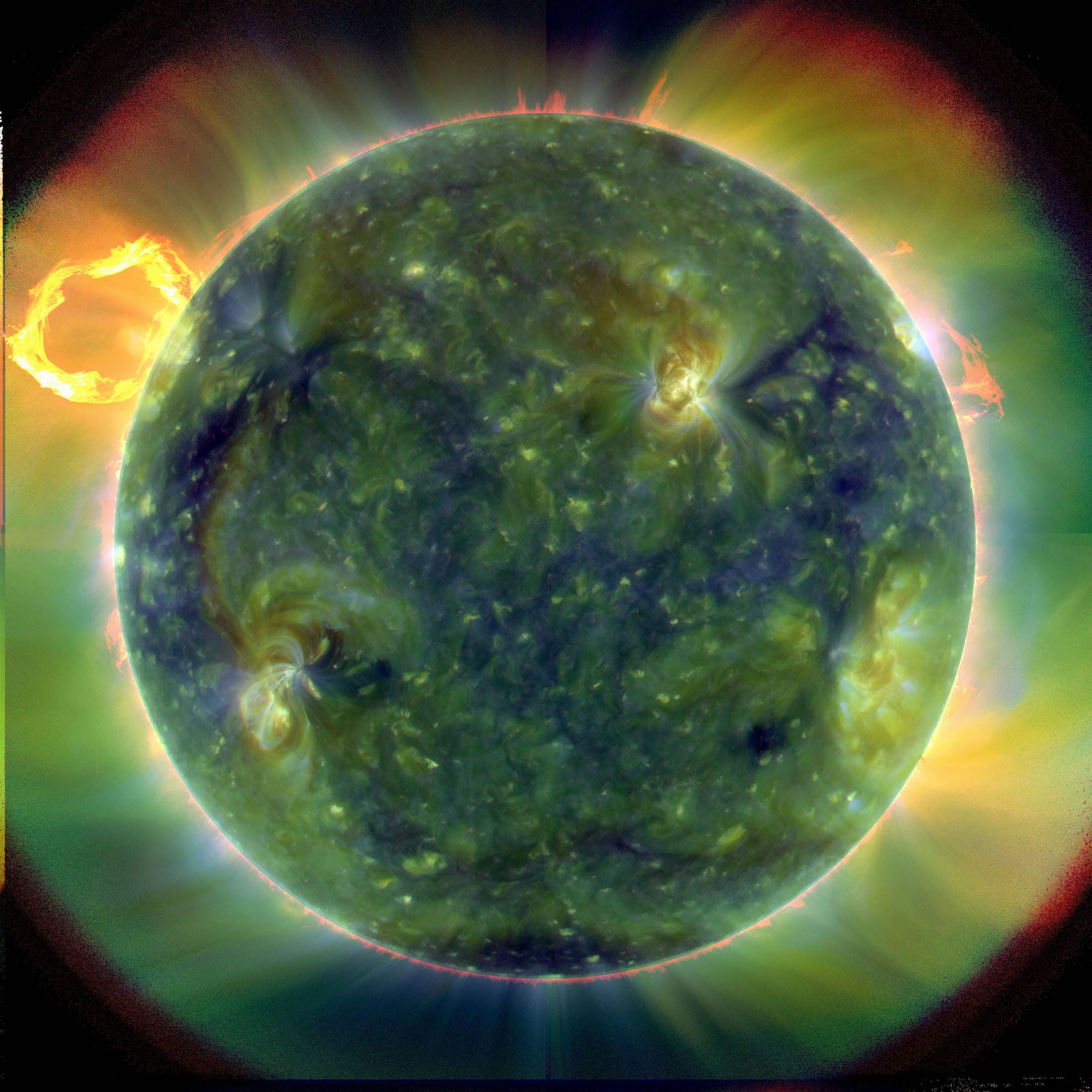 The sun is made almost entirely of hydrogen and helium. Earth, on the other hand, is made mostly of oxygen packed into various compounds. So are its rocky planet neighbors. The giant planets, such as Jupiter and Saturn, have compositions more like the sun's, but still are notably different from it.

Here's the puzzle. The sun and planets formed at the same time from the same cloud of gas and dust. But the material that made the planets had a composition different from the sun's. How did that happen?

A team led by Arizona State University scientists has found an explanation for this long-standing question and published it recently in the journal Nature Communications.

"Our goal is to determine the starting composition for the solar system," said James Lyons, associate research professor of astrophysics and cosmochemistry in ASU's School of Earth and Space Exploration and lead author on the paper. His co-authors are Ehsan Gharib-Nezhad of ASU's School of Molecular Sciences, and Thomas Ayres of the University of Colorado.

The team studied carbon and oxygen, common among the terrestrial planets, but not in their standard elemental form. Instead, they used these elements' isotopes, varieties of an element that have an extra neutron or two.

"We're most interested in the light, stable isotopes," Lyons said.

These are the isotopes of elements that do not decay radioactively. He explains that isotopes such as those of carbon, nitrogen, oxygen and sulfur should reflect the original bulk composition of the molecular cloud from which the solar system formed.

To determine the abundances of these isotopes, the researchers started with infrared spectroscopic data on carbon monoxide in the sun's atmosphere. This was collected by the Atmospheric Trace Molecule Spectroscopy (ATMOS) spectrometer, which flew in Earth orbit aboard the space shuttle (STS-66) in 1994.

The ATMOS data were compared to measurements of solar oxygen from the Genesis mission (2001–2004), which collected and returned to Earth samples of the solar wind, which is in effect the sun's outermost atmosphere. The comparisons showed that Earth and (by analogy) the inner planets are 5 percent enriched in both carbon-13 and oxygen-18 compared to the sun.

"When talking about isotope ratios, a 5 percent difference is massive," Lyons said. He added that it implies that the carbon and oxygen that formed part of Earth and the inner solar system experienced a different history than these elements did in the sun.

What caused that difference remains partly unknown, say the scientists, but they point to a likely culprit: ultraviolet light.

As Lyons noted, "One possible explanation for the isotope difference is that carbon monoxide was blasted by ultraviolet light in the early stages of forming the planets."

Irradiation by UV would have attacked both elemental carbon and oxygen and their compounds. This would break up compounds and change the isotope ratios, gradually moving the overall composition away from that of the sun.

The source for the ultraviolet light could have been either a vigorously active young sun or — more likely, says the team — a hot, massive star that was close to the gas and dust cloud from which the sun and planets formed. The radiation from such powerful stars can affect a large volume of space within giant molecular clouds.

In this scenario, the proto-sun is a massive body unaffected by those isotope effects, and therefore still carries the isotope composition of the starting material from which the solar system formed. Yet the thin disk of material from which the planets formed would have been affected much more, leading to a difference in isotopic composition between the sun and planets.

"If this explanation is correct," Lyons said, "then we have a strong constraint on the UV radiation present when the solar system formed."

Such a constraint would help astronomers understand the degree of UV processing of organic molecules in the nascent solar system.

It would also, he said, "help us characterize the role of ultraviolet radiation in the formation of other stars' solar systems with Earth-like planets."

It is likely, the team adds, that UV radiation processed organic materials on ancient Earth, contributing to the prebiotic chemistry that led to the origin of life.

Lyons said, "We now see that this UV processing actually began in the solar nebula, even before Earth formed, and it must have occurred in some exoplanet systems as well."