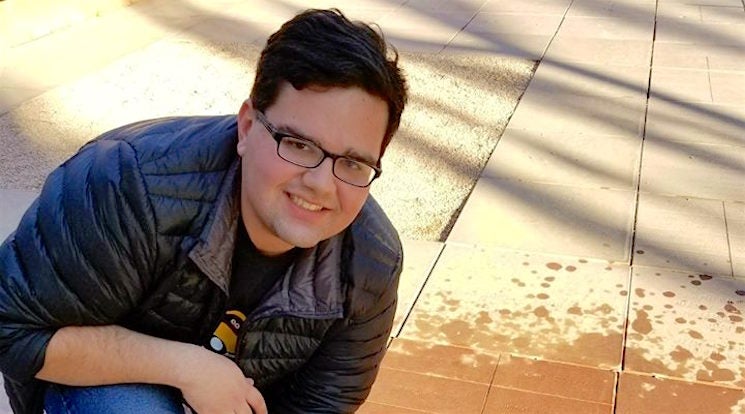 Alumnus Michael Busch graduated from ASU in 2016 with bachelor’s degrees in astrophysics and physics. He is currently a National Science Foundation Graduate Fellow at Johns Hopkins University where he serves as President of the Physics and Astronomy Graduate students. He is currently working on Hubble Telescope observations in the Andromeda galaxy to characterize pulsating stars, called Cepheids.

Of his own admission, Busch’s “Sun Devil Story” is one of immense difficulty, a few good academic achievements and awards, a lot community building, mentoring others, being mentored, working through failure, and, ultimately, succeeding and having fun along the way.

Busch advises incoming students that the key to success is getting involved. As an undergrad, he searched out research opportunities in labs and was mentored by faculty, including School of Earth and Space astrophysicist, Judd Bowman.

He also became a NASA Space Grant Fellow, worked as a community mentor in San Pablo and Manzanita Halls, and became involved in outreach, working in the School of Earth and Space Exploration’s gallery of exploration and the Marston Exploration 3-D Theater. “Being able to communicate and take initiative is sometimes worth a tremendous more than an A+ in a class,” says Busch.

Although his freshman year was tough, he describes his college experience as a labor of love. “I worked hard and it was worth it because I loved astronomy and I loved space,” says Busch. “I was so passionate about the research I was doing and I really enjoyed working with the people at ASU and at the School of Earth and Space Exploration.”

Busch says one of his best memories at ASU was being able to introduce the freshman class to the school’s director, Lindy Elkins-Tanton. Busch recounts, “I said a few words about my journey, told them about the school, and then introduced Lindy. We took a massive twitter selfie with more than 2,000 students!”

Having now graduated, he says his favorite memories are the ones he still makes with the Sun Devils he’s glad to call friends. “Freshman year was tough, but things got easier as I got to know my fellow Sun Devils and created a support group that will last a lifetime,” says Busch.

To sum up his ASU experience, he says, “I came in with well-defined goals and set myself out to achieve them and I’d like to think I did a pretty good job! I ran into obstacles along the way and I pushed through them.”

His plan for the next 10 years is to graduate with a Ph.D. from Johns Hopkins, where he is currently working with the Nobel Prize winner and physicist, Adam Riess. After earning his Ph.D., he like to find a post-doctoral position (maybe in Germany or another country), and try to become a professor. If that doesn’t work out, he’s open to going into industry or being a data scientist. He hopes to travel a lot, make lasting friendships, eat really good food, exercise more and drink tea. Eventually, he’d like to open a winery--but that may have to be for the next decade.

Above image: Alumnus Michael Busch with the family Busch legacy brick behind Old Main on the ASU Tempe Campus. Michael's brother purchased the brick from the ASU Alumni Association when Michael was the last of four siblings to graduate from ASU. Photo credit: Ronald Busch