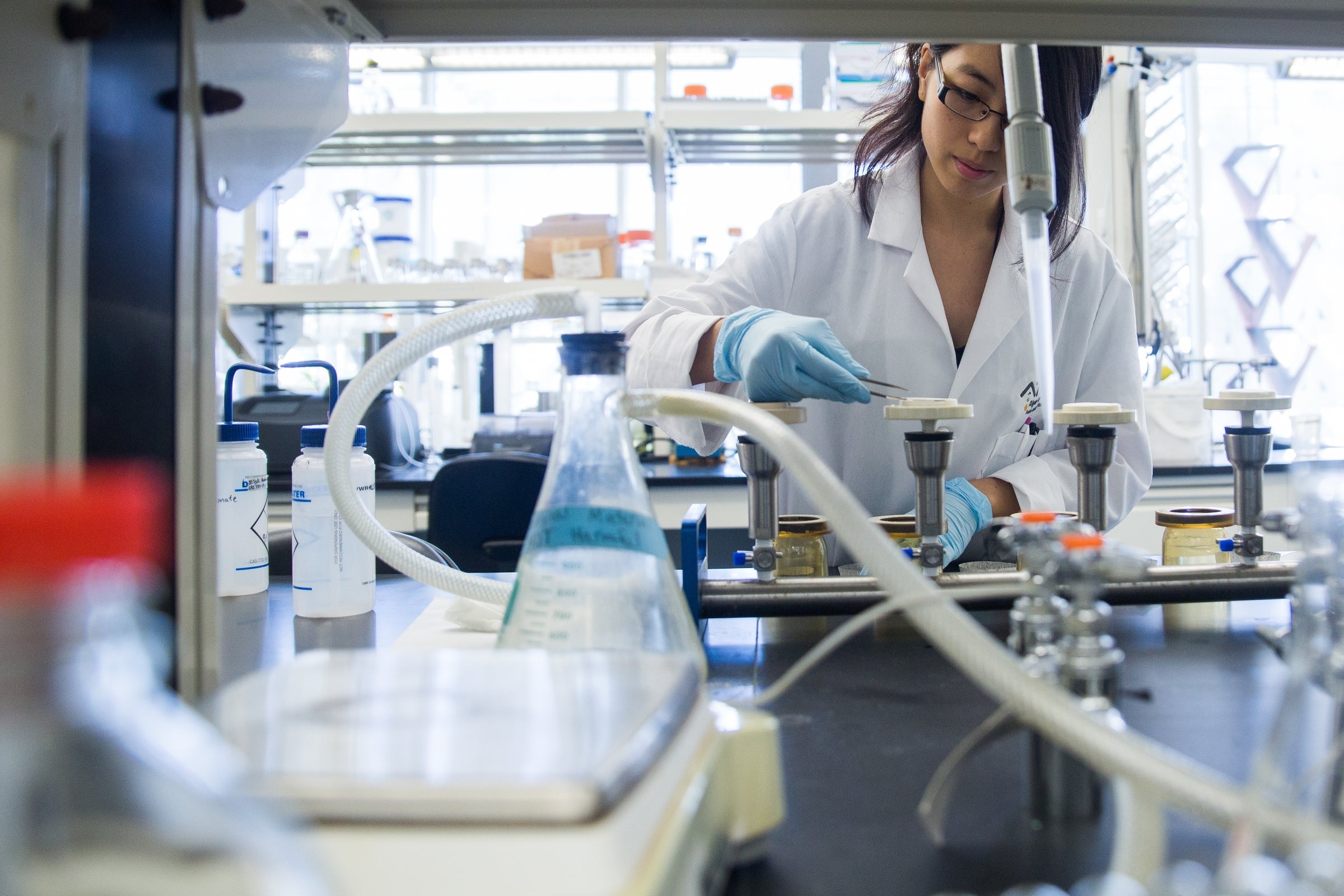 Arizona State University ranks ninth out of 719 universities in the U.S. for research expenditures for institutions of higher education without a medical school, up one spot from last year, in the National Science Foundation’s Higher Education Research and Development rankings. The NSF’s HERD rankings are the leading source of information about research and development expenditures at American universities.

This year’s ranking puts ASU ahead of Caltech, Carnegie Mellon and Princeton for institutions without a medical school.

In total research expenditures among all institutions, regardless of a medical school, ASU moved up four spots, now ranking 44th in the U.S., ahead of the University of Chicago and Boston University.

And in a new NSF ranking on research expenditures in anthropology, ASU ranked first among all institutions, ahead of Harvard, Stanford and Yale.

“An important goal at ASU is to foster an environment where our faculty and researchers feel empowered to pursue cutting-edge research and to work seamlessly with colleagues spanning multiple disciplines and even institutions,” said Sethuraman Panchanathan, executive vice president of Knowledge Enterprise Development and chief research and innovation officer at ASU.

“Our continued success on the NSF HERD rankings affirms the power of outstanding ideas pursued by our faculty and researchers as well as their innovative approach. We are committed to agile and responsive research and advancing solutions that impact society,” Panchanathan said. In anthropology, ASU’s first-place ranking reflects strong programs across the university, especially in the School of Human Evolution and Social Change (SHESC) and the Institute of Human Origins in the College of Liberal Arts and Sciences. ASU’s 2016 anthropology expenditures totaled $13.2 million.

In one project led by Professor Michael E. Smith in SHESC, faculty and students are examining archaeological and anthropological evidence from Teotihuacan, once the largest and most influential city in the ancient new world and today an archaeological site in the Valley of Mexico.

The research is seeking clues to why Teotihuacan was more egalitarian than its fellow ancient cities. Among those clues are relatively large house sizes for its residents and burial sites that suggest common practices across the demographic spectrum, from peasant to elite. As part of the research, students are building a Teotihuacan burials database and analyzing burial practice patterns relative to wealth, status and gender.

“At Teotihuacan, the standard residence was 10 times as big as an Aztec peasant house,” Smith said. “There’s something strange about the level of inequality being lower, and there seems to be a lot of prosperity. So maybe the burials will provide another perspective on this because we don’t have a good handle on how society was organized at Teotihuacan.”

A move up one spot to 19th in engineering expenditures reflects a broad portfolio of research at ASU that addresses myriad real-world challenges. One of those challenges is making solar energy technologies cost-competitive with fossil-fuel energy.

Current commercial solar cells achieve 15–20 percent efficiencies (a measure of the portion of the sun’s energy they convert to electricity). In a project funded by the U.S. Department of Energy’s SunShot Initiative and co-led by Ira A. Fulton Schools of Engineering Assistant Professor Zachary Holman, researchers are working on a way to make photovoltaic modules up to 30 percent efficient.

Their approach is to split the solar spectrum, directing infrared photons to a silicon solar cell and visible photons to a gallium arsenide (GaAs) solar cell that is better suited to that energy range. The technique dramatically reduces energy loss to waste heat.

“We believe this SunShot project will allow us to demonstrate the first 30-percent-efficient silicon-based tandem mini-module,” Holman said.

Research expenditures in 2016 for the Fulton Schools of Engineering totaled $127.3 million.

For years, ASU has been a leader in research extending beyond the bounds of our planet and one of a few universities capable of building flight instruments for space. This is reflected in ASU’s No. 10 ranking for NASA-funded expenditures, up one spot from last year, ahead of Columbia, UCLA and Stanford.

Launching in 2022, an ASU-led NASA mission to the asteroid Psyche will be the first exploration of a metal asteroid, which appears to be the exposed nickel-iron core of an early planet. A total of $480 million was awarded for the project. The mission could provide a unique look into the violent collisions that created Earth and the terrestrial planets.

“This kind of big science can’t be done everywhere," said Lindy Elkins-Tanton, director of the School of Earth and Space Exploration and principal investigator of the project. "It requires a commitment to working between traditional disciplines; a commitment to institutional support; a dedication to big questions and the long timelines big projects require; and a positive, team-oriented, collaborative culture. The combination of these things together is rare in academia. We have these things at ASU.”

The School of Earth and Space Exploration is involved in 20 space missions, 15 of which are NASA missions.

ASU faculty will also play key roles on the Southwest Research Institute’s Lucy mission, which will investigate a swarm of primitive asteroids near Jupiter. Launching in 2021, Lucy will carry an instrument designed and built at ASU to measure asteroid surface temperatures and physical properties.

Unlike hurricanes or tsunamis, no early-warning system for volcanoes exists. ASU researchers are working to change that.

Current research includes understanding magma flow history and creating early volcano eruption warning systems. This is just one area of research represented in ASU’s No. 2 ranking in geologic and earth science expenditures, a step up from No. 3 last year. With more than $44 million in expenditures in 2016, ASU ranked ahead of Columbia, University of Arizona and the University of Hawaii at Mānoa.

“We’re still trying to understand the science,” said geologist Christy Till, assistant professor in the School of Earth and Space Exploration. “What are the events that head up to the eruption, so we can look for them on the surface. ... We have all those clues about how to look at volcanoes, but we don’t know how to decode them very well yet.”

Addressing complex problems in the humanities

ASU researchers stand at the forefront of exploring human culture. Research ranges from the discovery of medieval texts providing a detailed look at women’s lives in the Middle Ages to projects to understand discourse in the Muslim world and border studies in an ever-globalizing world.

ASU rose significantly in the ranks of humanities expenditures to No. 4 from No. 12 last year, ahead of NYU, Yale and Princeton.

Home to 10 centers and institutes dedicated to the humanities, ASU’s research initiatives span a range of cultural, historical and religious areas as well as studies devoted to conflict, ethics and the arts.

In addition, the university has emerged as a leader in exploring the interplay between the humanities and science and technology. Examples include the Human Security Collaborative within ASU’s Global Security Initiative, the Center for Biology and Society and the Center for Religion and Conflict.