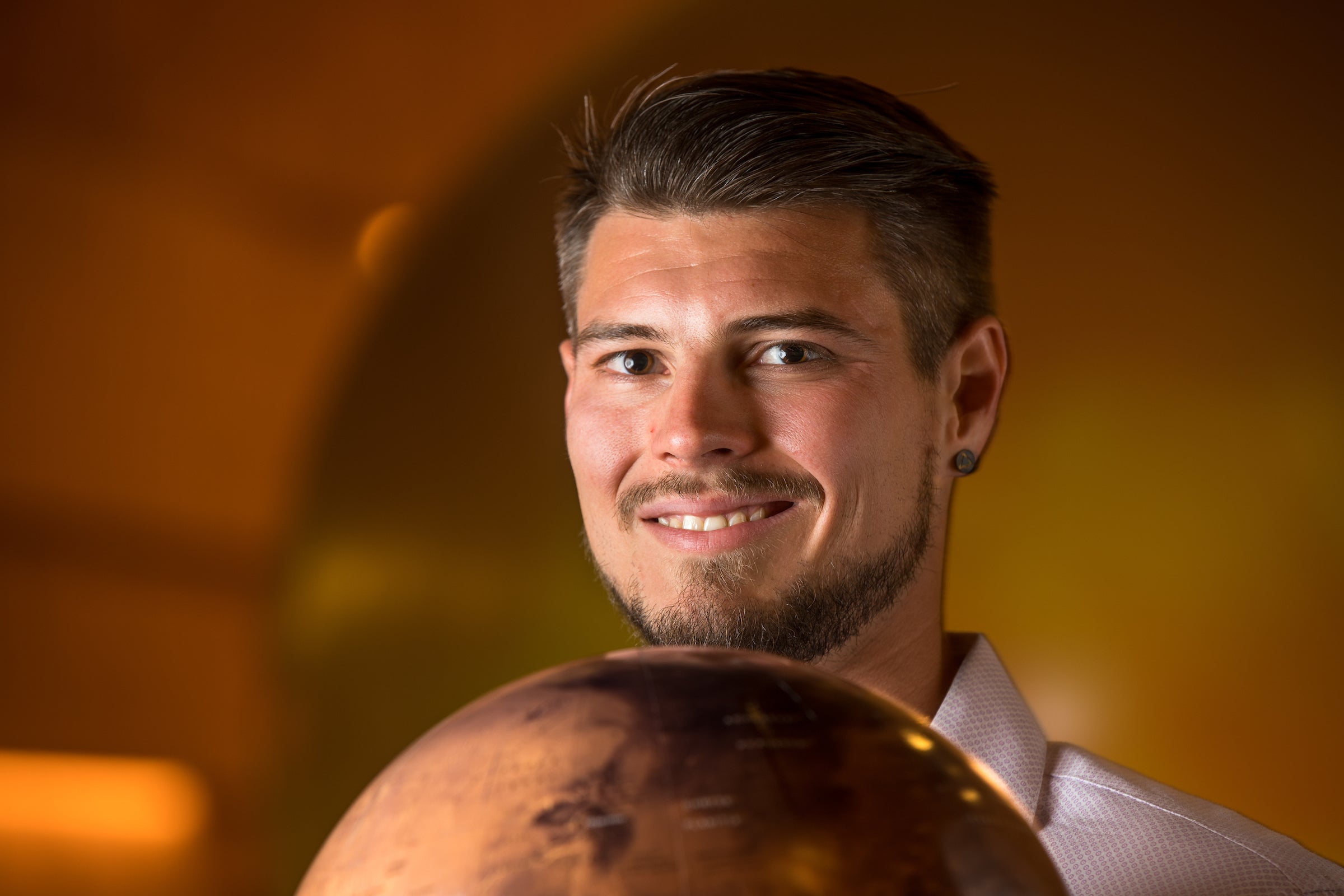 ASU geology grad maps out Mars and his career path

Editor’s note: This is part of a series of profiles for fall 2017 commencement. See more graduates here.

When Kyle Mohr was growing up in the mountain foothills of Cave Creek, he wandered the desert alone, thinking about how it was shaped.

“I’ve always liked geology,” Mohr said. “I’ve always been interested in stars. ... I like the story behind the rocks.”

Now he is graduating from Arizona State University’s School of Earth and Space Exploration with his Master of Science in geology and starting a PhD in geology.

Mohr wants to do research and teach, but he also is mulling shooting for astronaut some day.

For his master’s thesis, Mohr made a geological map of Mars’ Ascraeus Mons volcano. It’s more than 11 miles high and 298 miles in diameter and the third-largest volcano on the planet.

“Importantly, he did this on time (in just over 2.5 years) and under budget (still money left over in the NASA grant that funded him),” said his adviser, David Williams, director of the Ronald Greeley Center for Planetary Studies. “He has demonstrated discipline and commitment and is developing the skills to become a good scientist.”

Answer: I was working in South Carolina, doing groundwater monitoring for the state department of natural resources, and I realized this isn’t what I want to do. I really wanted to go back to planetary (studies). I really enjoyed the rocks; I honestly wasn’t so interested in hydrology. I felt like a monkey could do what I was doing, so I wanted to go back to school. I was always interested in becoming an astronaut, looking at the stars. Earth is studied — I want to know what the other planets are made up of. Are they different? Are they similar? That was my big moment. I don’t want to be stuck doing something I don’t want to do. I want to go do something and achieve something that I really want to do, so work isn’t work — work is fun.

A: We don’t really know a whole lot about space. It’s kind of funny. You hear all these stories about how much we do know and then you come and realize there’s a whole bunch to be explored, and that’s what I think is fascinating about it. If you don’t have an imagination, you’re not going to do well in this field. Everything’s not really testable at the moment so you kind of have to have this imagination of "I think it’s this process, and here’s how I can kind of relate it to something we see here on Earth." It’s exciting. We’re discovering new things all the time.

A: One main reason was Dave Williams already had a project available for me. I actually contacted a couple of schools. Growing up here I knew the area. My brother went here. I contacted Dave, and he said he didn’t have a project at the time, but six months later he said, "I have one if you want to come and apply." I did. I moved back, moved my family across the country.

A: Stick with it. It’s tough. I remember in my undergrad, and I wasn’t necessarily the best student. Now I look back on things that I missed out on, and I should have worked harder and studied harder. … It’s worth it in the end.

A: To be honest, I don’t live around here, so I mostly come here and work. I’ll talk with people over at the Ronald Greeley Center, where I worked. I mostly would chat in there because it’s temperature-controlled, so during the summer it was still only 70 degrees in there, so it was a really nice place to be when it was 120 outside. In the winter I’d always go for a walk at lunch and enjoy the sights.

A: Something to do with overpopulation and resources, I guess — make things more efficient so the species can survive.