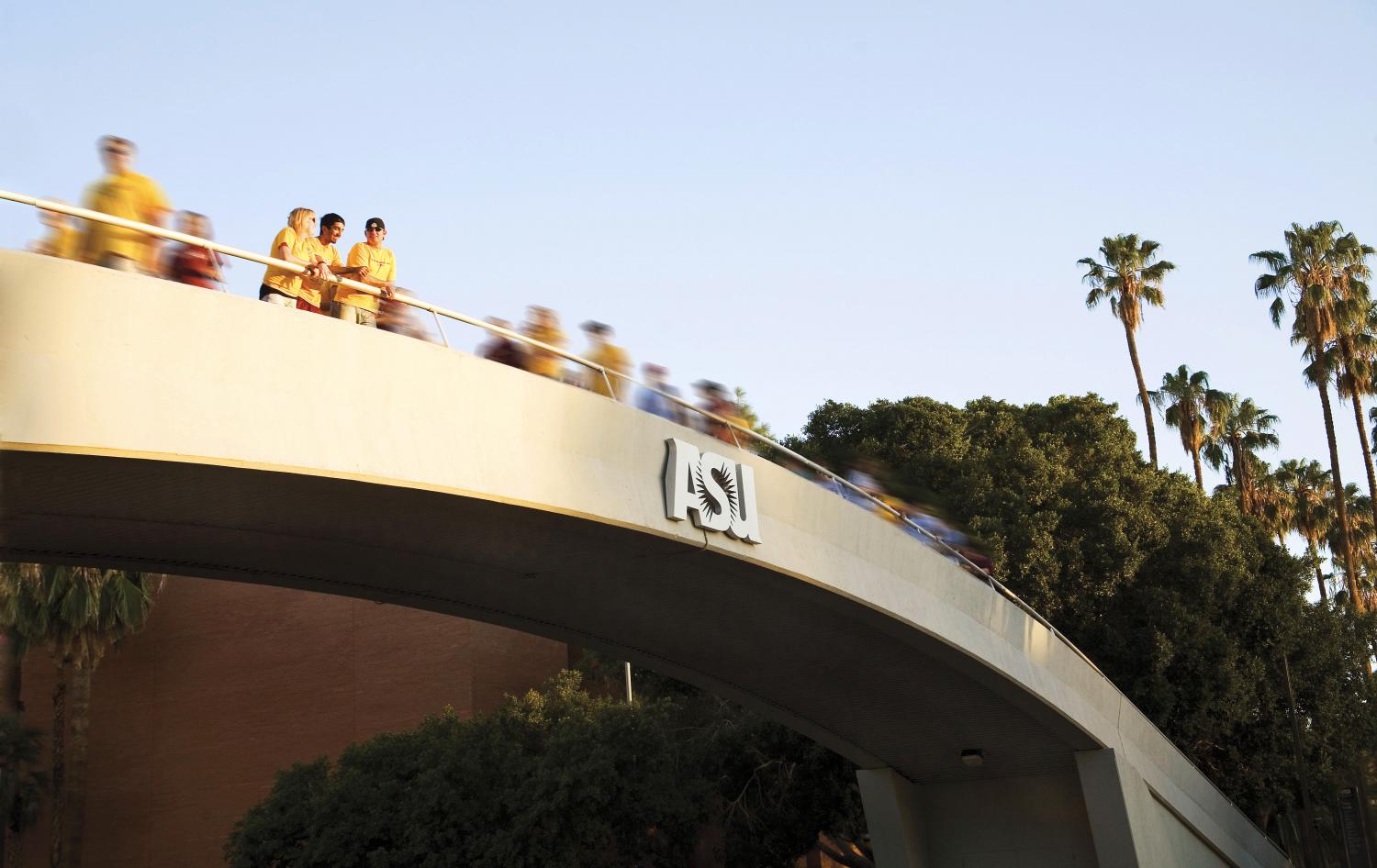 The projects will contribute significantly to research, teaching and innovation in science, technology and engineering. These graduate students received the fellowship based on their project proposals, which aim to maintain and advance the nation's technological infrastructure and national security while contributing to the economic well-being of the public.

The National Science Foundation awards the fellowships to graduate students who have proven to be innovative and creative leaders within their field of study. These competitive awards are provided to individuals who are risk-takers and see a transformative future through their research so the nation can build on the strength and creativity of a diverse society.

As the oldest program of its kind, the graduate research fellowship has a long history of highly successful recipients. Previous awardees include former U.S. Secretary of Energy Steven Chu; Google co-founder Sergey Brin; and ASU’s Distinguished Origins Professor Frank Wilczek. In 2004, Wilczek jointly won the Nobel Prize in Physics with Hugh David Politzer and David Gross for the discovery of asymptotic freedom.

The fellowship offers three years of support during the five-year period students will be conducting their research. Each student will receive a stipend of $34,000 and Arizona State University will receive a cost-of-education allowance of $12,000 for each student. Leena Bui is a doctoral student studying developmental psychology in the Department of Psychology.

Leena Bui is a doctoral student studying developmental psychology in the Department of Psychology. She was drawn to the field due to the unique lens offered for researchers to investigate human phenomena.

“Without a developmental perspective, you could completely miss important and interesting processes that develop over specific periods of time,” said Bui.

Bui will conduct research to identify novel mechanisms through which ethnic identity and neighborhood factors promote academic resilience. She will investigate findings in two groups: a high-risk group and a high-achieving group. By drawing data from both groups, Bui will offer a new perspective on the topic because researchers usually only have access to one group.

The goal of her research is to advance knowledge on factors that can predict academic achievement among an underserved and often overlooked population. She hopes her findings will contribute to designing interventions for those in need.

“I would like to continue investigating neighborhood influences on adolescent outcomes, especially among at-risk youth,” said Bui when asked about her plans for the future. Edward Buie II is pursuing a Master of Science in astrophysics and astronomy in the School of Earth and Space Exploration.

Edward Buie II is pursuing a Master of Science in astrophysics and astronomy in the School of Earth and Space Exploration. He has always been fascinated with learning about the unknown in the universe, which is a big portion of studying astronomy.

“At a young age, black holes were the things that drew me into astronomy. I wanted to learn all about them,” said Buie. “Then through my undergrad, I was really interested in dark matter.”

The research will impact further understandings of the processes influencing the gas that flows into galaxy halos and feeds star formation. Outside of galaxies, his research could also lead to a greater understanding of the gas dynamics in galaxy mergers and clusters.

Buie is grateful to be awarded the fellowship and feels the accomplishment validates all of the hard work he has done so far. After he completes his fellowship, Buie’s plans for the future are still open. He intends to own a business that will conduct research to push humanity forward, but he is ready to take on any opportunities that come his way.

“For me this fellowship is a blessing,” said Buie. “In undergrad, I worked two to three jobs to pay off my student loans. There was a lot of struggle along the way. Being awarded the National Science Foundation fellowship was almost like validation for all the hard work I put in and it allows me to purely focus on my research and classes.” Blake Elliott is a doctoral student studying cognitive neuroscience in the Department of Psychology.

Blake Elliott is a doctoral student studying cognitive neuroscience in the Department of Psychology. He has always been captivated with understanding behavioral processes, such as memory and decision making.

“It bridges the gap between understanding basic biological processes in the brain and complex human behavior,” said Elliott. “Cognitive neuroscience gives us the tools to understand how these behaviors manifest from the brain.”

Beyond the increased scientific understanding of the memory system, the findings from Elliott’s study will have implications for mental health diseases, including addiction and post-traumatic stress disorder.

He thanks the support of the Department of Psychology and his co-mentors Gene Brewer and Sam McClure, associate professors of psychology, for making the project possible. When Elliott completes the fellowship, he will aim to develop a theory of reward sensitivity and memory that links biological function to human cognition as means to make a step forward in improving the quality of peoples’ lives.

“This project would not be possible without the support of the ASU Department of Psychology,” said Elliott. “My project is possible because of the synergy between my mentors and I. ASU is one of the few places in the world where this type of project could be accomplished.” Lea Gleason is a graduate student studying anthropology in the School of Human Evolution and Social Change.

Lea Gleason is a graduate student studying anthropology in the School of Human Evolution and Social Change. She is enticed by selection and how it affects certain traits and adaptations in the human lineage.

“Cultural anthropology really interests me because it tries to promote diversity and tries to understand people,” said Gleason. “It wasn’t a subject I had heard of before I got to college, but as soon as I took a cultural anthropology class I knew what I wanted to do with my life.”

Her project will focus on studying warfare among the Turkana of East Africa. By studying the warfare, she looks to improve the understanding of the origins of non-kin cooperation. Human society is an outlier in the natural world because humans cooperate regardless of sociopolitical organization or degree of genetic relatedness. She will examine the drivers of cooperation in large-scale pre-state societal warfare in relation to the Tukana’s social network.

Gleason’s project is novel due to the population in focus. Most studies on cooperation and human decision-making have been focused on Western, educated, industrialized, rich and democratic populations, also known as WEIRD. Her study will analyze how the collective action problem is solved in non-Western, non-industrialized populations. She will apply the mechanisms of cooperation to solve global collective action problems, such as climate change and resource preservation, in hopes of developing more effective solutions.

As Gleason moves forward in her academic career, she hopes to become a professor one day. She would also like to establish a non-profit institute and provide educational resources to people who may not feel that academia is accessible to them. She will continue her research to serve as a voice for incorporating the anthropological perspective into policy and program development and implementation.

“I firmly believe that future problems may not be able to be solved solely through science or technology,” said Gleason. “In order to ensure we promote peaceful advancement within our world, we will need approaches and solutions from the social sciences and humanities.” Christian Ross is a doctoral student studying science policy in the School of Life Sciences.

Christian Ross is a doctoral student studying science policy in the School of Life Sciences. He said while scientific discoveries happen in a lab, science policy ensures scientific innovation improves the lives of people and promotes human flourishing.

“Science policy is interesting because it gets at the bigger picture of how science works out in the world,” said Ross.

Ross will be researching how scientific engagement regarding emerging technologies affects the public. The research asks who decides what counts as ‘science’ or ‘public,’ and why. He will study technologies such as Clustered Regularly Interspaced Short Palindromic Repeats, which is an emerging technology that has had substantial academic and media attention that called for public engagement about its applications and societal implications.

He hopes the research will help scholars, policy makers and the public understand what is meant by public engagement, what its limitations are and what it can do for governing emerging technologies. Ross noticed public engagement has been overlooked as a core component moving forward with the technology. His research will take the unexamined relationship and connect the two.

Ross plans to continue in policy making, particularly at the national level when he completes his dissertation. He hopes to take advantage of post-grad opportunities with the National Science Foundation, the American Association for the Advancement of Science and with government agencies like the Food and Drug Administration, the Environment Protection Agency and the Department of Defense.

“The fellowship has made my research much more feasible than it would have been otherwise,” said Ross. “The National Science Foundation has given me generous support and flexibility to focus on my project and do it well. I am incredibly grateful for the opportunity for my graduate studies and career that it has given me.”