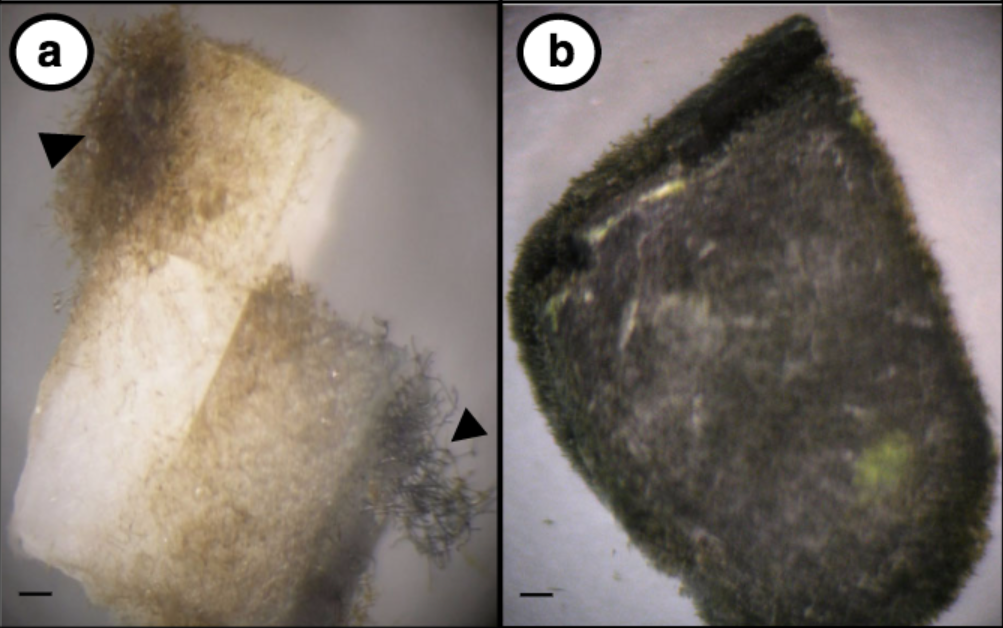 Drawing blood from a stone

A little sunlight, water and carbon dioxide. That is all it takes to keep cyanobacteria — the miniature versions of plants — happy.

For this, they use carbon fixation, one of the most important reactions on Earth, turning carbon dioxide into sugars, fats and proteins needed to grow and thrive, while giving humans and the rest of animals a precious byproduct: the oxygen in the air we breathe.

While land plants get most of their carbon dioxide from the air, aquatic microalgae and cyanobacteria obtain it from dissolved carbon dioxide or bicarbonates in water.

However, a team of researchers led by ASU scientist Ferran Garcia-Pichel has shown new evidence that some cyanobacteria get out their biological pickaxes and get to work digging into solid rocks such as limestones to mine for their carbon sources there. And they do this with particular gusto when the availability of dissolved carbon dioxide in the water is limited.

The work, a part of former graduate student Brandon Guida’s doctoral dissertation, was based on previous discoveries that described the ability of these microorganisms to excavate their own habitat, boring into carbonate minerals trapped in rocks.

“We have provided the first compelling evidence for direct fixation of mineral-derived carbon into biomass, in culture and in nature,” said Garcia-Pichel, a professor in the School of Life Sciences, and founding director of the Biodesign Center for Fundamental and Applied Microbiomics in the Biodesign Institute.

The results recently appeared in the advanced online edition of Nature Communications.

To perform their experiments, first, they had to track the carbon fixation through carbon 13 isotopes and a complementary carbon imaging tool called NanoSIMS, of which co-author and ASU School of Earth and Space Exploration Assistant Professor Maitrayee Bose is an expert. For the study, they used carefully controlled experiments in a lab strain of cyanobacteria, the Mastigocoleus testarum strain BC008, to help unravel the transformation of rock carbon into the cell’s organic carbon.

Next, they intentionally limited the amount of dissolved inorganic carbon (DIC) in the experiment for one group while not limiting in the control, and grew the cyanobacterium for four months under these different conditions in a sterile seawater broth with a square of calcite mineral added.

When they limited the carbon source, the calcite chips were perforated with abundant microbes, known as endolithic growth. When it was not limited, the organisms grew faster suspended in the liquid or attached to the outer surface of the mineral.

Next, they wanted to explore whether or not what they were seeing in the lab was representative of what happened with endolithic microbiomes in Nature. To test this, the team analyzed endolithic biomass and mineral substrates in a variety of samples collected around the intertidal rock outcrops of Isla de Mona, Puerto Rico.

“We found that our field results were consistent with our lab culture experiments, and with the hypothesis that the main carbon source for these endolithic communities is the local carbonate,” Garcia-Pichel said.

The research team speculates that the discovery of a new mother lode, a potentially inexhaustible carbon source found throughout the crust of the earth and oceans coral reefs, may have given cyanobacteria an important competitive advantage and ecological niche during their early evolutionary history, more than 2 billion years ago — long before animal life came onto the scene in the Cambrian explosion period.

“One could speculate that an evolutionary advantage of boring may have come about as a means to circumvent dissolved inorganic carbon limitation in benthic microenvironments,” Guida said. “Given the old history of cyanobacterial euendoliths in the fossil record, this may have been an ancient adaptation.”

Not only has the team helped prove the physiological mechanisms of microorganism boring, but also for cyanobacteria, given new meaning to the time-worn adage of drawing blood from a stone.

“Interestingly, the process that these endolithic microbiomes carry out, converting solid carbonates into biomass, could constitute a potential solution for helping draw excess atmospheric carbon dioxide into a stable, storable form, if we could only get it to act in reverse,” Garcia-Pichel said.

The project was funded by a grant from the National Science Foundation.